What is Google Voice APK

Explain the concept of Google Voice.

You need to contact someone, but you don't want them to have your cell phone number. Try the Google Voice service out!

But what precisely is Google Voice?

Since I began using Google applications for business, particularly Google Drive and Google Docs, my perspective on them has completely transformed. They are no longer anything that makes you anxious about the security of your data. They have evolved into a really helpful coworker. Since then, I've began to devote more of my time to the various Google applications. Google Voice is one of them, and despite its various beneficial functions, it is still relatively unknown to the general public. 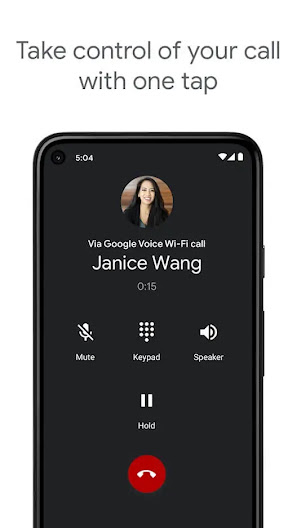 Google Voice is Google's official and completely free software. You will be assigned a mobile number based on the data stored in Google's cloud, and you will be able to use this number to perform any function that a cell phone would typically perform. Google Voice allows you to make and receive calls, automatically record your voice, synchronize your devices, text, and share images...

What distinguishes Google Voice from other online call-making services?

You might have used a variety of online communication systems, such as Skype or Zoom... Google Voice is a little different in compared to these. It is not a service for video conferencing (remote communication via video). And Google Voice is not the same as the instant messaging apps available on mobile devices, nor is it an app that allows users to phone and talk with others at the same time.

This translates to the ability to use Google Voice in the following scenarios:

Google Voice is the most effective tool for any of the aforementioned requirements, so give it a shot.

How do you use Google Voice to make and receive calls?

To begin, and most importantly, Google Voice will help with VOIP calls, which are calls made online without the use of a phone. In fact, when you first sign up for a Google Voice account, the app will immediately enable you to make phone calls in this manner. However, you won't be able to use Google Voice to make calls until you either install it on your phone or link it to another number. This feature is quite useful if you want to make calls, send and receive texts, and check your voicemail from your tablet rather than your phone.

Following that, once you've linked your Google Voice account to your phone number, you'll be able to make and receive Google Voice calls from your phone while in screen call mode. You should, however, avoid giving the other party your genuine phone number. This option is quite useful if you need to call a large number of people but do not want to reveal your cell phone number so that you are not inconvenienced in the future. When using Google Voice in this mode, you can also customise the following characteristics based on your preferences:

Calls can be received over the web as well as mobile phones.

When SMS messages are sent to your mobile number, Google Voice will either import them or send them to the mobile number or email account of your choice, depending on which option you select. If you enable both of these receiving modes, you will never miss a message again for the rest of your life.

Texting with Google Voice is not only as simple and convenient as texting over the phone, but it is also substantially less expensive. However, it has been enhanced with the capacity to send messages to a big number of people at once and to exchange images quickly.

Furthermore, Google Voice provides outstanding synchronisation capabilities. After installing this application and logging into your personal accounts, all of your data and information will be automatically synced across all of your electronic devices, including your desktop computer, laptop, tablet, and mobile phone.

In summary, in this day and age of heightened attention on data security, Google Voice is a helpful and simple tool. Features such as the ability to "make phone calls without revealing your true mobile number" and the "ability to transfer received calls to any other mobile number" highlight its utility. These elements are the most convincing proof of the application's wide functional capabilities.

Trust me! You won't believe how many useful features Google Voice provides till you give it a shot.