Mighty Party: Magic Arena is introduced in this section.

A turn-based warfare game on a chessboard that is fast-paced and exciting.

The first level of the game is quite similar to the first level of StickWar. You will move about to engage in combat. The troops' strength ratings are displayed on the right-hand side of the screen. Those with lesser combat points than you will be the first to go up against the strongest. Fight it, capture it, and include it into your team in order to raise your score. Then go to battle against more foes that have more powerful stats to complete the mission. 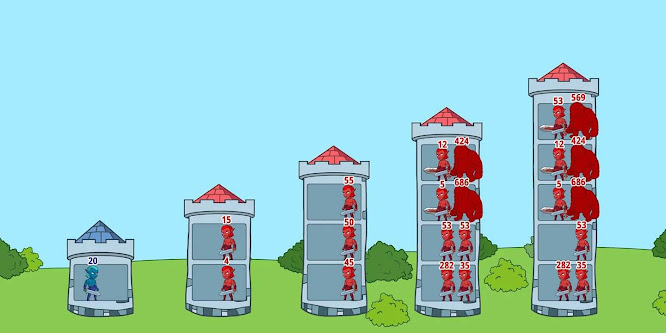 For example, if you start off with 15 points and then hit a player who only has 10 points, you lose 15 points. You receive 25 points for defeating him. You'll go to the area where people with 20 points are located in order to deal with them. After that, if your total score is 45, move on to the next group to finish them off. That's how it works. The score grows with each turn and successful attack; you gain more troops or more equipment, as well as additional weapons like swords, spears, bows and arrows, shields, etc. as you go through the game.
The game's functionality is rather straightforward. After you've given it some thought, simply tap the desired location, and your troop will assault automatically. You don't have to be concerned about what will happen to them. You are the winner, of course, because you have the highest score.

It will be an entirely new game when you play Mighty Party Magic Arena. You will be put on a chessboard and will be pitted against an opponent on the other side of the board. When the "king" loses his life, all of the troops perish, just as it is in the game of chess. And the ultimate responsibility of all troops is to defend the king and his family. This is also the primary genre in which this game is set. I believe the purpose of the first screen is just to get you warmed up for some fun. Later on, you will encounter similar games every time you enter a new fortress, until the "chess boards" will open up once again and a more difficult combat will be presented to your attention.

This chess-style turn-based battle is a fantastic combination of action, strategy, and role-playing games all at once. Each chess board will have its own set of obstacles, monster squads, and kings, all of which will compel you to win in order to go to the next level. It is only necessary to match the right soldiers with the right weapons to maximise the abilities of the characters, launch battles at the appropriate times to influence how the war is resolved, and calculate the relative health between our side and the enemy in order to dispatch troops in a reasonable manner to complete the mission.

The greater the number of heroes, the easier it is to gain the upper hand.

Whether you murder every soldier on the other side or you kill the King as swiftly as possible, the chessboard will come to an end and the triumph will be yours. Following each victory, you will be able to unlock new troop characters, get access to additional weapons, and outfit yourself with more complex equipment arrays. The more the number of heroes you have unlocked, the greater your chances of winning swiftly.

You guys are free to participate, so put up your best efforts to win the initial fights and then continue to amass as many soldiers as you can to win the game. In this game, there are hundreds of heroes and monsters to fight against. As a result, the variability on both our side and the enemy's side is comparable. It will be easier to prepare if you have a powerful and diversified legion on your side before the adversary unleashes more terrifying beasts.

However, you will also require a strategy.

Taking use of troops is similar to taking advantage of flowing water. The presence of a large number of soldiers is not sufficient; you must also employ a sensible and unexpected defensive/attack plan in order to prevail while causing the least amount of damage. Using Warriors to engage the enemy's overwhelming force, while leaving a wizard behind to alternately deliver critical strikes, is an example of this.

Arrange an Archer on an empty chessboard in order to murder the king who is alone in the other game. Keep the adversary occupied and confused by fighting in many lanes, allowing you to approach the king in the shortest amount of time. Aim for the king to expedite the game; this is a strategy I do frequently when playing this game. Fortunately, the opposing AIs are rather foolish, relying only on a large amount of blood to survive.

There are several game modes to choose from.

If you don't want to fight alone, you may invite friends or join other online players in PvP battles, or you can join guilds and clans to fight side by side with other people. Each battle in Mighty Party: Magic Arena takes place in a location that is somewhat different from the previous one. Furthermore, as you move to a new location on the map, the environment changes totally, increasing the level of excitement.

Screenshot of the Mighty Party Magic Arena in 1440x810 pixels.

To be more specific, the game features several game types, including:

Single player: You will be immersed in an epic adventure and will go on a trip throughout the world in the role of a hero.

PVP, or player against player (PVP), is another popular game option, and it comprises Ranked Matches, Mid-Match Matches, Novelty Arenas, Survival Tournaments, Raid Battles, and Massive Events, all of which provide substantial benefits to those that participate.

Turf Wars: You will become a member of the guild and utilise their army to combat your opponents in order to gain control of crucial territory. Invite your friends to join you in this mode! It's a lot of fun. A game option in which your clan alliance battles using their forces against opponents for control of the most valuable areas is called "Clan Wars." Prepare the Guild for a triumphant return!