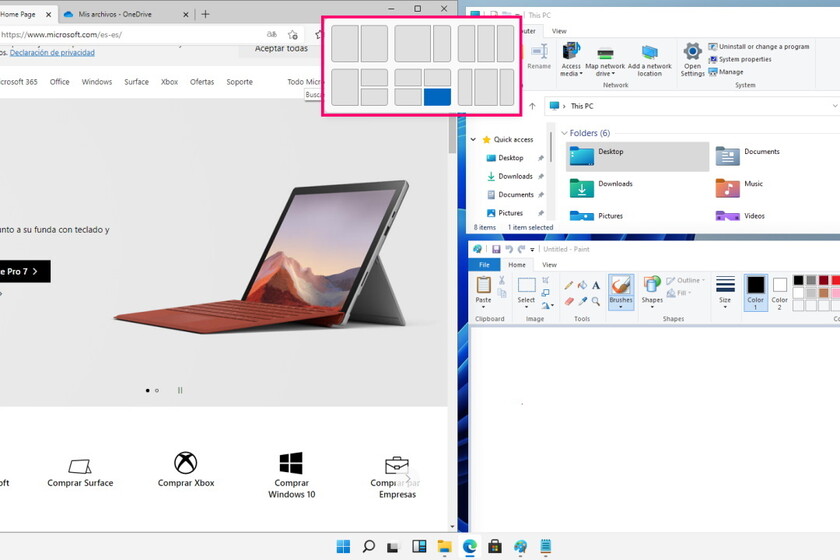 Windows 'Snap' feature, which makes it easy to rearranging open windows on screen —Allowing to distribute them by the same one and to keep them visible if we wish so— it will be seen remarkably hypervitamin in the new Windows 11 (Yes, even more so than with the FancyZones of the PowerToys for Windows 10).

As we were able to discover in the preliminary filtered version of this new edition of Microsoft's operating system, one of the changes that we can observe in it and that go beyond the merely aesthetic is the already known as 'Maximize Button menu'.

One of the most useful changes in the new Windows 11

This menu, which appears when placing the mouse cursor over the 'maximize' button in the corner of one of the open windows, shows us a series of layouts with grid designs to divide the area of ​​the screen between 2 and 5 windows, allowing us to choose what place the window we are managing at that time occupies within it.

After having automatically reset and resized the window in question, the system allows us to indicate which other open windows will occupy the rest of the positions of the selected layout. If we then choose another layout, the windows that we do not select will continue to occupy the same area of ​​the screen, only now in the background.

Unfortunately, it has been observed that some Very popular apps like Slack or Spotify don't yet support the 'maximize menu' because they are using their own window controls which is expected to begins to correct once the official launch takes place Windows 11.

We still know little about this new tool, and we do not know if Microsoft has in mind —for example— allow users to create their own custom layouts, as was the case with FancyZones.