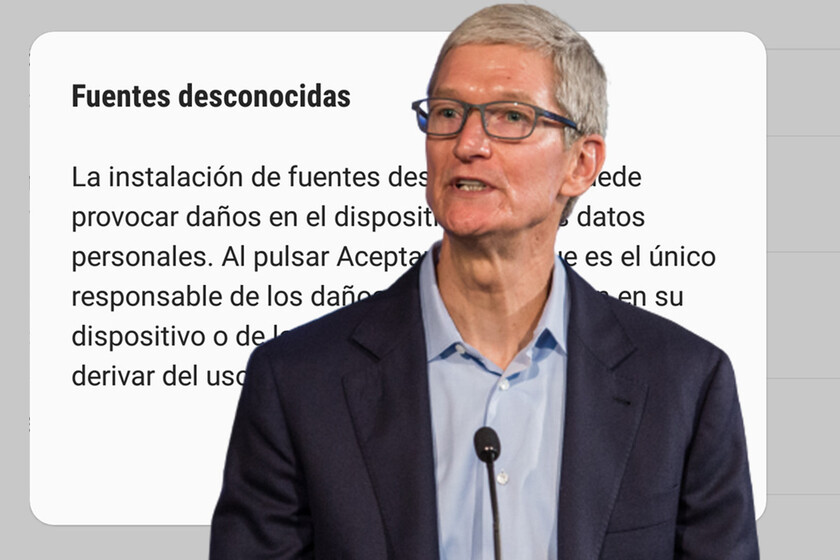 One of the differences between an iPhone and an Android mobile is that in the second it is much easier to install applications unofficially, from external sources. According to Tim Cook, this is why Android has 47 times more malware than iOS.

This has been made known in an interview with Brut, adding that "loading applications from outside the App Store would destroy the security of the iPhone. However, the figure Tim uses seems to be a bit outdated: It is from 2018.


Blame it on the APK

If you want to install an application on Android, you have a lot of options. The first is usually Google Play, although there are many other application stores such as Huawei App Gallery, Galaxy Store, Aurora Store, UpToDown or Amazon App Store, to name a few. Furthermore, it is possible install apps directly from your APK, no store in between.

This is one of the big differences between Android and iOS, where there is a single store, the App Store, and also it is not possible to install applications from outside the store. At least, not without first jailbreak, use certificates for companies or other processes much more complicated than their equivalents on Android.

Tim Cook is not a fan of this direct installation of applications, considering that "would destroy iPhone security", as well as all the privacy and security initiatives that are incorporated into the App Store.

According to Tim Cook, loading applications on the iPhone outside the App Store would destroy the security of the iPhone

These initiatives refer to privacy labels, advertising tracking or manual review of applications, which make a screening of applications that become available for the user. Google does a similar, not so exhaustive screening on Google Play, but it has already caused some applications like Telegram to launch a different version for inside and outside the store. Outside the store, it is the law of the jungle and the mobile is protected only by Play Protect and Android's own protections.

In the interview, Tim Cook gives the information that there are 47 times more malware on Android than on iOS. He has not given the source, although it seems the Nokia Threat Intelligence Report White Paper for 2019, which collects data on infections by operating system for the previous year, that is, 2018. 0.85% of malware infections on iPhone and 47.15% on Android mobiles.

The figure used by Tim Cook is from 2018

It is an important figure and the report itself agrees with Tim Cook in demonizing external application loading, stating that "the main reason malware targets the Android platform is the fact that once sideloading is enabled, applications can be installed from anywhere."

However, it is also a figure from three years ago. In this time, Google has improved Google Play Protect, creating an alliance between ESET, Lookout and Zimperium to share information about threats. In 2019, Play Protect stopped 1.9 billion apps with malware. In 2020, Google prevented a million malicious apps from reaching the store.

Tim Cook's figure is from a couple of years ago. The latest data is around 15 times more malware on Android than on iOS, not 47

Last year, Nokia published its updated Threat Intelligence Report 2020 that includes the figures collected during 2020. Interestingly, iPhone infections have increased to 1.72% and those affecting Android have dropped considerably to 26.64% of the total. 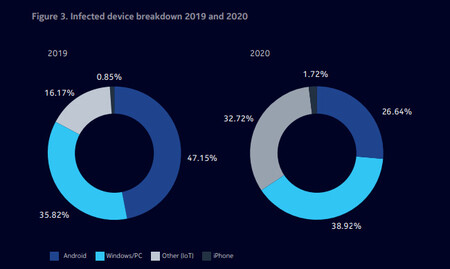 The latest figures from the latest Nokia security report

It is also important to emphasize that the percentages are based on numbers of infections. According to Statista, Android's market share is 72% and iOS 24%. There are many more Android phones in circulation than iPhones, and that also influences the number of infections.

In any case, according to the latest figures from the latest Nokia report, Android has about 15 times more malware than iOS. It is still a much higher amount, although much less than what Cook has preferred to use. There is a greater possibility of killing malware on the phone, but in exchange for having almost total freedom over what is installed on the mobile. The decision is up to the user.