In March, Google Play began to test a redesign that ended with the hamburger menu and completely changed how the My applications section worked. Later, the redesign came to everyone and it seemed that My apps would not change, but now the redesign of My apps it is beginning to unfold as well.

At the moment Google has not made this change official, so it is not clear if it is still a test or it will eventually reach everyone. The redesign implies that the five tabs of My Applications are merged into two, having to do one more tap to go to the list of apps with updates. Although it also has its advantages.


This is "Manage apps and device"

If you have gotten used to how the section works My apps from Google Play, it is time for you to prepare yourself for the possibility that it will change completely. What started as a minority test together with the removal of the ☰ menu and the change in settings, is being rolled out to users.

This is a radical change in the My Apps menu that, in fact, disappears as such. Instead you meet Manage apps and device, a centralized place where you can do basically the same as before, but in a different way. Instead of having five tabs, there are two. 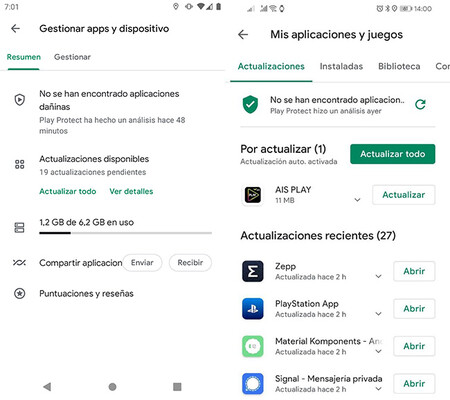 On Resume Play Protect is included above, same as before, but for updates there is a master button that updates everything. You can continue to see which applications have updates, but it involves one more touch, you must enter See details.

See details takes you right to Pending downloads, which is the closest thing to the previous one My apps, although without anything additional. Here the functionality is the same, or you touch on the applications that you want to update by hand or press Update all. 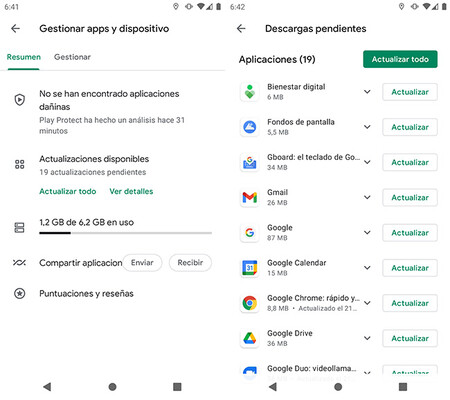 Other sections found in Resume is he use of space on mobile (previously available in the tab Installed). Tapping on the graph opens Free up space, where you can choose applications to download. This has not changed compared to the previous version and it is still one of the few ways to uninstall several applications at the same time on an Android mobile without root.

The eyelash Managing is quite interesting, especially since it is prepared to carry out actions in batches and because it has filters. For example, you can use the filter Available updates and select which applications you want to update and which ones you don't. This was not possible with the previous design, unless it was by clicking Install manually in all the apps you wanted to update. 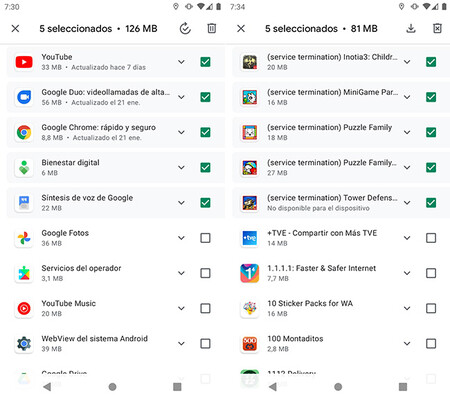 The most interesting novelty is perhaps that at last you can remove many applications from your collection in one fell swoop, using the "Not installed" filter and the Remove button. All the apps you download on Google Play are added to your collection, and over time the list can include thousands of apps.

And what about the shortcut to My apps? If you used this shortcut to go straight to pending updates, it's still working, but it takes you to the tab Resume. That is, if you want to see the applications with updates, you must do an additional touch.