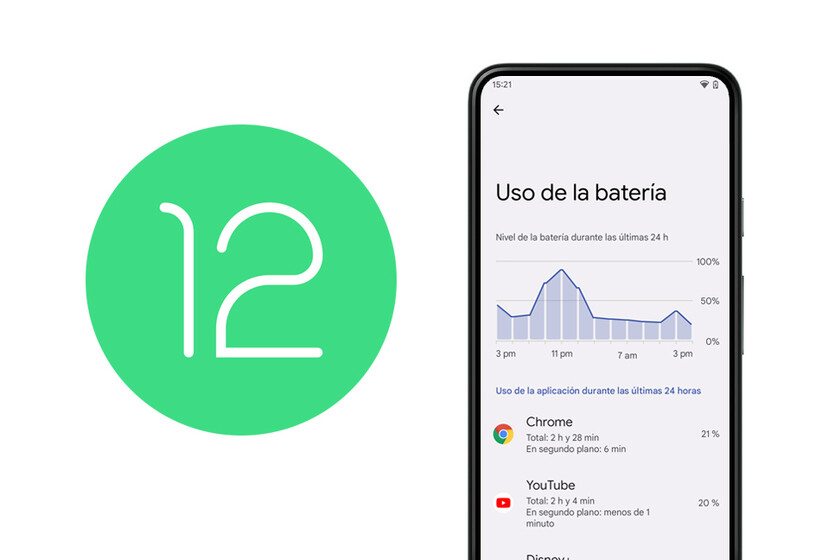 We continue to discover new features in Android 12 thanks to the launch of its Beta 2, an update that has arrived full of surprises, with important improvements that we hope will officially materialize in this great system update.

Another of the surprises that it hides Android 12 Beta 2 is in the battery statistics, which will be more granular so you can check the battery usage by time intervals.


Battery use at two-hour intervals

Currently, Android is limited to querying the battery usage during the last 24 hours showing in a graph the hours where more battery has been consumed, but it does not allow to see in those peaks which applications have been used the most. Up to Android 12.

TO Mishaal rahman, editor in XDA-Developer, I have activated a new feature on your Pixel 3 XL with Android 12 Beta 2 that allows check battery usage at two-hour intervals. As we see in the following animation, by clicking on each of the bars we can see which applications used the most battery in that two-hour period.

This new behavior It is not activated on all Pixels with Android 12 Beta 2. Mishaal Rahman does not know if he activated it by mistake through the developer options, he only discovered that by clicking on the statistics bars he could filter by hours.

This feature is very practical, since it allows us to discover in those peaks of battery use which application was the culprit of that battery drain, especially if it occurs at some time when we were not using the mobile.

These more granular battery statistics are expected to officially reach Android 12, and therefore to all phones that update to this version.