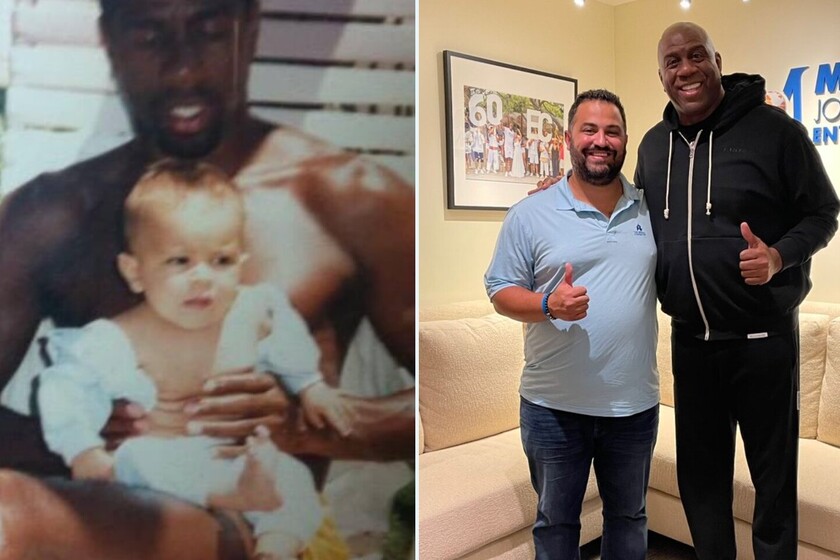 The 1988 NBA Finals concluded the 87-88 season of this basketball league with the victory of Los Angeles Lakers, Western Conference champion, over Detroit Pistons, Eastern Conference champion. Steven Galanis, a baby who had just won the Sweetest Baby Contest from Chicago came to Hawaii with their parents and grandparents. An idyllic paradise where Magic johnson, one of the best basketball players in history and a flaming Lakers star, was resting.

Galanis's grandmother, when meeting such a sports genius, I have no doubt: she wanted him to take a picture with her grandson. But he did not want to, he asked him please not to take photos. It did not matter, the baby's grandmother put it on top and magical player had no choice but to hold it. The father of the offspring, a professional photographer, immortalized the scene in which the child and the star shared a face of astonishment.

The anecdote with Magic Johnson ended with the baby who starred in it, founding a company specializing in personalized celebrity videos for his fans, of which the former basketball player is now a part

Although the story was not over: an even greater memory was missing.

In search of the memory of the star 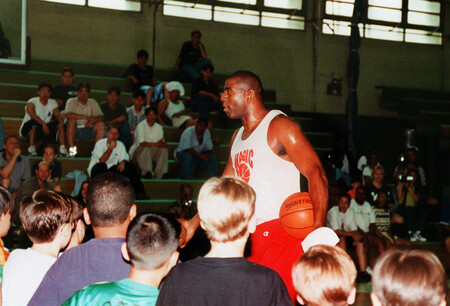 The father of the then 7-month-old baby toured the island, Steven Galanis himself says in a thread of tweets, looking for an open photo developing establishment. He found the only one that existed and, with the printed photo, went to Magic to ask him to sign them, to which Johnson flatly refused. The story seemed to be over.

The little one grew up being one of those people eager to get an autograph or a souvenir of any famous person, Although he had the thorn in his photo with the famous base of the Los Angeles team without signing. Something that he resolved 25 years later when he met Magic signing autographs at a Chicago venue: "I showed him the photo and I told him the story. He loved it!" The basketball player signed the photo and added a message to his creator, the grandmother: "Happy 88th birthday, Helen. Good attendance!"

One year after Magic, 25 years after signing it, the idea for Cameo was born

A year later Galanis's grandmother passed away and it was during the funeral that the idea of ​​the company arose that in recent years has set up: Cameo. A platform that allows anyone to get personalized celebrity videos by paying a price that depends on each star. Clips that can be ordered for yourself or for a third party.

The story, however, does not end there either. The story ends by closing the circle because Earvin Magic Johnson, Jr. is now part of it. He has just entered the board of directors of this company and also in the catalog of celebrities from different fields that make up his particular offer.

Cameo, what last March it raised $ 100 million, seeks to expand abroad and increase features after experiencing skyrocketing use during the worst months of the pandemic in the United States. For fans it was a way of feeling accompanied by their idols and, for them, its rise represented extra money. The company, for its part, in addition to multiplying users, tripled its employees and reached 300.

Cameo is now looking to become much more than a platform to get personalized celebrity videos, including a social component. The idea is that it can serve as a communication channel for celebrities of all kinds with their fans.. "Our long-term vision is to build technology that enables every athlete, actor and artist to develop a personal relationship with every fan," former baby Steven Galanis told Bloomberg. Getting a souvenir of Magic today would have been easier for the family of the founder of the company.