the notice with the changes appears again 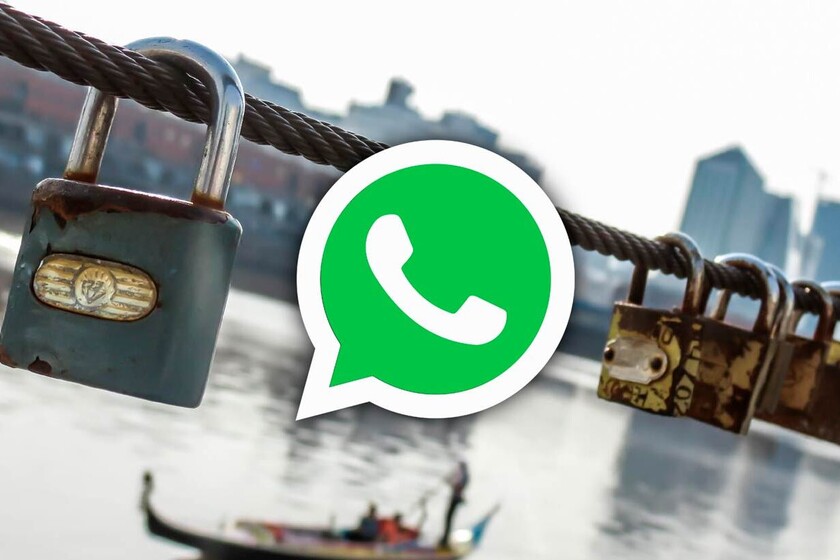 WhatsApp users who have not accepted the changes made to the platform on May 15 are attending the propagation of the notices within the app so that everyone accepts the new policy. The notifications jump when opening WhatsApp and also when the application is being used; without losing service options by not accepting them.

When WhatsApp announced in early 2021 that it would change its privacy policy to improve the relationship of companies with courier services A notable controversy was generated around these changes and what they imply due to all the information that Facebook ends up collecting. After the new policy came into force, WhatsApp assured that it would continue to insist that all users accept it. The platform is being insistent. 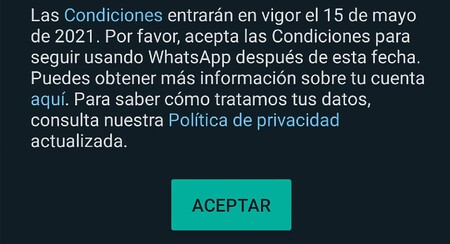 Clicking on this button implies accepting the changes in privacy

The company has already clarified to us that the changes in their privacy policy were global and they would continue to insist that users accept them. This implies that those who do not give their authorization during the first wave of alerts will continue to see how they appear on their phone while using WhatsApp.

The new privacy message is a three-page notice where WhatsApp exposes the keys to its platform and what changes in the relationship between the company and its users with the new policy. At the end of the message, a tempting 'Accept' appears for the user to say yes to the platform; always without it being essential to continue using it: simply, simply delete the message by going back with the menu button or with the gesture of swiping from the edge of the screen to the center (it depends on the type of navigation configured).

Although WhatsApp is insistent with the messages that urge you to accept the new conditions, it is not essential to offer compliance: WhatsApp will not stop working for not accepting the changes, nor will it lose functions. The secure messaging application working the same as always. 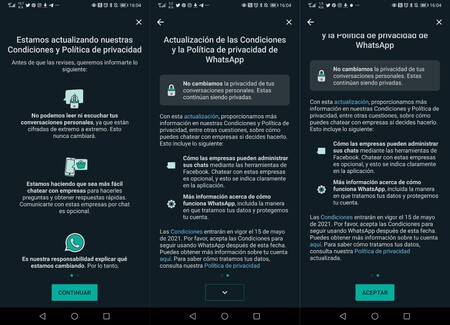 So are the new notices recently introduced by WhatsApp

The only drawback of not accepting the privacy changes is that the notice would continue to jump. In our experience, some accounts view it with a certain frequency, in others it has not appeared. We do observe a growing insistence; all despite the fact that WhatsApp assured that the majority of users had accepted the changes in the privacy policy.

What really changes in WhatsApp 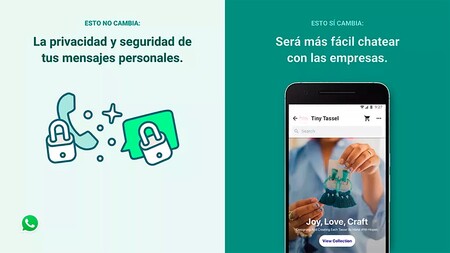 The controversy was, and continues to be, very popular. Given the close relationship between Facebook and WhatsApp, with the second belonging to the first after the purchase for 19,000 million dollars, it is logical to think that both will share a greater volume of personal data. Not really like that, at least currently (and for the record).

Changes in the privacy policy are aimed at allow interested companies to establish better communication through WhatsApp. These companies can be hosted on Facebook servers in order to offer the product catalog on WhatsApp; This implies saving data from the communications between companies and users, offering ads on Facebook for users to communicate on WhatsApp, enabling purchases through messaging and providing support for such purchases. Those who do not accept the new policy will not have access to future news.

WhatsApp wants its platform to be useful so that companies not only contact customers, it also wants the messaging app to be used to directly purchase products

Accepting the new conditions does not give Facebook permission to use WhatsApp data, at least not to a greater extent than what already happens now. Of course, WhatsApp reserves the option to extend its policy, as long as the Irish privacy organizations authorize it.