iPadOS, the operating system of Apple tablets, has been one of the protagonists of their WWDC21 event, as they have taken the opportunity to show some of the novelties of its version 15, which is expected to arrive on our devices after the summer.

One of the great novelties of iPadOS 15 will be its improved multitasking to facilitate the simultaneous use of several apps, beyond the two that allows us to handle the Slide Over function already implemented in iPadOS 14.

Upgrading function Split view allows us to drag the app that we have open to one side, showing the home screen so that we can open a new app (or a new window of the same app) from it, which will occupy a proportional portion of the screen. 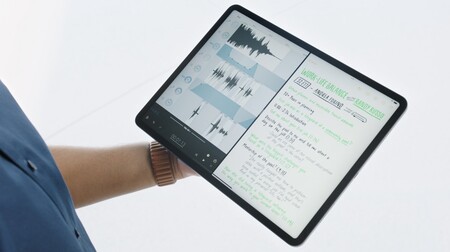 In addition, iPadOS 15 will have a new feature called 'Shelves', an area where we can send the apps minimizing them, and then retrieve them again when we need to use them again.

A look at the 'Bookshelf'.

Changes from the same home screen

But we will not need to open a single app to start noticing the changes in the new operating system: without going any further, the 'home screen' will include the option to add widgets (with extra large size, suitable for the size of the iPad), anywhere in it, and not just on its left bank. This feature is already implemented in the current version of iOS.

Another of the new features of this mobile OS that was also available in version 14 of its sister system for smartphones is the app library, which helps us better organize the apps installed on our device.

On the other hand, the app Notes It will now allow us to organize them better thanks to the introduction of hashtags, and share them more easily: simply by quoting the other user using the @.

What's more, the new 'Quick Note' feature It will facilitate the quick creation of notes by dragging the Apple Pencil from one of the lower corners of the terminal.

The thing does not end here: from now on, we will also have the Translation function on our iPad, which will provide us with automatic translation for voice in several languages ​​and integration with the function Live Text, which allows us to copy and paste scanned text from an image file or from the device's own camera.

However, We will not see changes to the lock screen for nowApple was planning to introduce them, but it looks like they won't finally be released until iPadOS 16 hits the scene next year.

We don't know anything about the rumored new privacy panel, which would allow the permissions of each installed app to be clearly displayed.