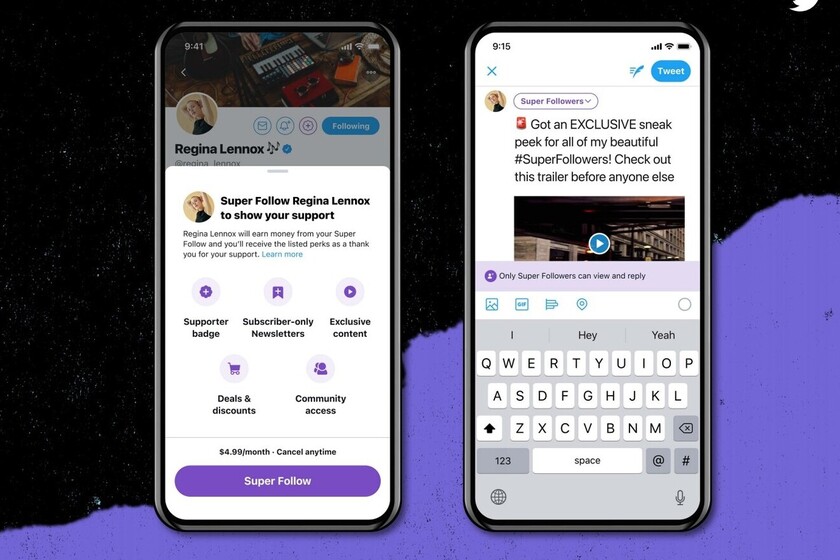 Twitter announced last February several changes aimed at providing financial incentives for content creators. Now, these changes are beginning to land, little by little, in the social network: it has already opened among its US users the enrollment process to become a beta tester for your new monetization features (the 'super follows' and the 'ticketed spaces').

To register, users must be 18 years old ... and an iPhone, since the new 'Monetization' section only appears, for now, in the iOS version of the Twitter mobile app. Among all the users who sign up, Twitter has thought enable only a small percentage as testers of the same, for which the generalized implementation of these functions seems to be something still distant in time.

What do the Super Follows offer?

Those few chosen, however, will have the opportunity to try a function like the Super Follows, which constitutes a monthly subscription modality not unlike the Patreon model, allowing content creators to offer exclusive content to users according to their 'subscription level' (that is, the amount paid each month, with tranches of $ 2.99, $ 4.99, and $ 9.99).

The requirements to be able to activate this function require the user to have at least 10,000 followers, and have published at least 25 tweets in the last month.

What do Ticketed Spaces offer?

When it comes to Ticketed Spaces, we are faced with the already well-known live audio rooms created to compete with Clubhouse, but with the addition of having paid access. Thus, this function allows you to sell 'tickets' to anyone who wants to have access to one of your audio broadcasts on Twitter, with a range of prices that may vary between $ 1 and $ 999.

Access to this function will be less demanding in terms of followers than the previous one: it will only require having reached 1000 followers, although we must have organized a minimum of three Spaces during the last month.

Twitter has already announced that its commission percentage when we use these features will be limited to 3%, leaving the remaining 97% in the hands of the content creator… As long as our income does not exceed $ 50,000, in which case your income share will be up to 20%.

Although the above calculations They apply, of course, to the percentages that Twitter has left clean after paying the commission for in-app sales to application stores (Google Play and App Store), which take between 15% and 30% of the amount paid by the subscriber.