review with features, price and specifications 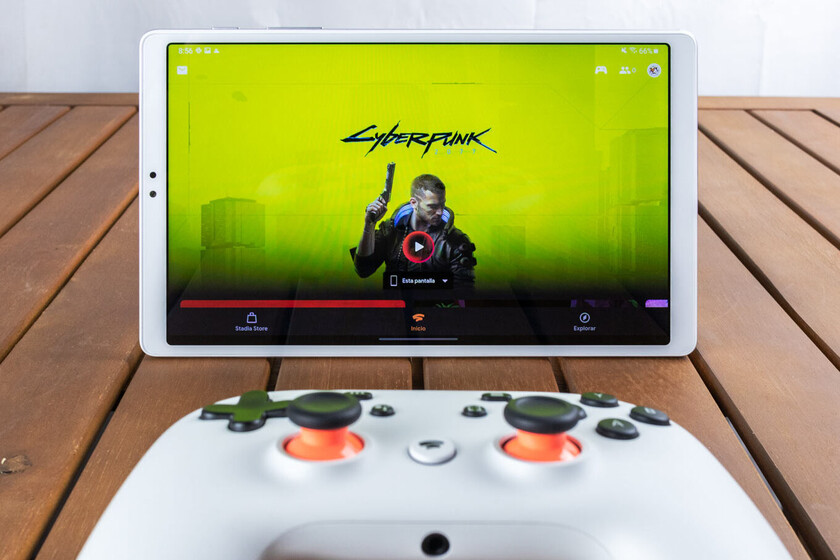 The Samsung Galaxy Tab A7 Lite is one of the few Android tablets that offers a compact size with an 8.7-inch screen. Reduced in dimensions, and contained in hardware, the device aspires to become the multimedia and entertainment center of the whole family.

It is not usual for manufacturers to market a 'compact' size tablet, that's why the Samsung Galaxy A7 Tab Lite aroused feelings of curiosity when we proceeded to teach it. Contained dimensions, more than enough screen to enjoy multimedia content and quality materials, all this can be seen with the naked eye. But how does the tablet behave on a day-to-day basis? It is time to analyze it.


Data sheet of the Samsung Galaxy Tab A7 Lite 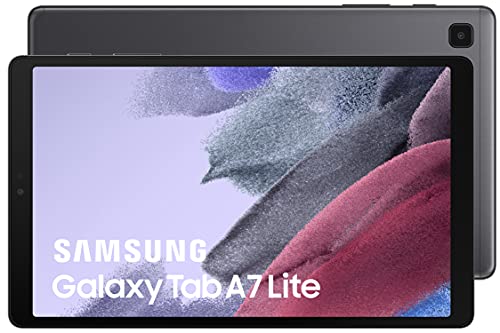 Attractive and small in size, albeit with a poor quality screen 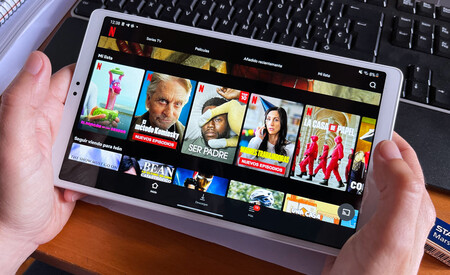 The last name 'Lite' is there for something, and not only because of the reduced dimensions of the tablet. Before delving into performance, we will say that the Samsung Galaxy Tab A7 Lite is very handy, it does not weigh, it is very grateful in use and the materials give a feeling of quality. Its rear face is metallic; reserving the plastic for the top and bottom edges.

The Samsung Galaxy Tab A7 Lite is grateful in terms of design: designed not to offer inconveniences in handling, its soft edges, and its lightness, ensure that playing or watching long Netflix sessions does not exhaust excessively. Always with a multitude of drawbacks, as we will see; starting with the design of the lower edge, where the USB C is anchored: that port, and the headphone port, they are not focused on the bulk of the Samsung Galaxy Tab A7 Lite; and the buttons, located on the right side, are too high for a comfortable press.

Lite implies a reduction in dimensions, especially on the screen: our protagonist offers an 8.7-inch TFT panel with notable drawbacks: resolution is too low (WXGA +), sharpness is lower than expected, lack of contrast, the color temperature is cold (cannot be regulated) and the brightness is somewhat low. The sensations with the screen water down the multimedia experience, which is just what the device powers. And there is another big drawback: tactile response is very slow, especially because of the ballast that the processor implies. 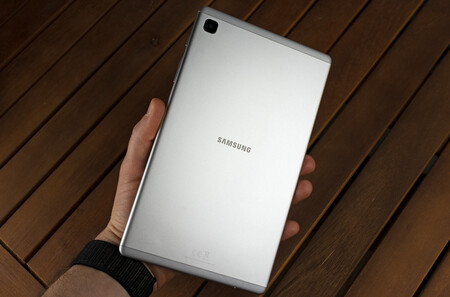 The dimensions of the tablet greatly favor the use

Samsung offers a better face in the sound section: the tablet has a double external speaker (lower and upper edges) with a high volume and distortion above 70%; the Samsung Galaxy Tab A7 Lite has a headphone jack with high quality, Dolby Atmos enhancements and good bass presence; Bluetooth audio quality is also at an excellent level. It is not the sound experience of the tablet S, but it is appreciated that Samsung does not neglect the audio. 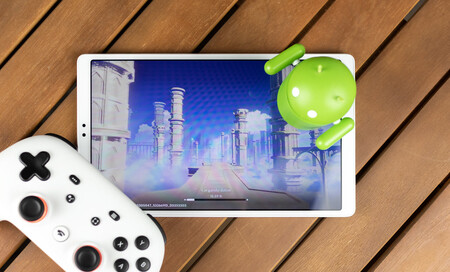 The Samsung Galaxy Tab A7 Lite is an affordable tablet, the last name not only determines the dimensions and part of the performance. This is where the scissors are most noticeable: the processor, a MediaTek Helio P22 T, falls very short on a day-to-day basis. And let's not say when it's time to start tasks that require power, such as games with a certain graphic load: the Samsung Galaxy Tab A7 Lite suffers. And with her who runs it. 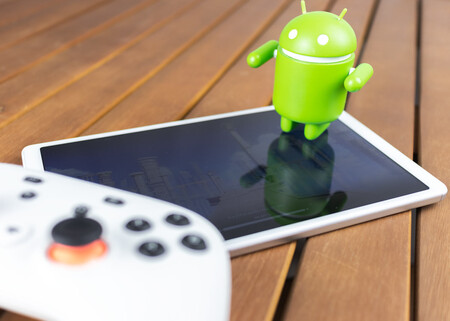 The included SoC slows down the tablet experience so much that we often tapped the icons a second time because we thought the screen hadn't detected the tap. This constant 'lag' increases when the device is performing background tasks, such as downloading applications: the delay between touch and boot can despair. Of course, it does not get used to getting hot; at least while an app is not running for a long time.

The tablet boots titles like PUBG or Genshin Impact at a low quality. It costs me to move them, though can be used without too many problems once they start. Below you can see how the benchmarks capture that adjusted performance. 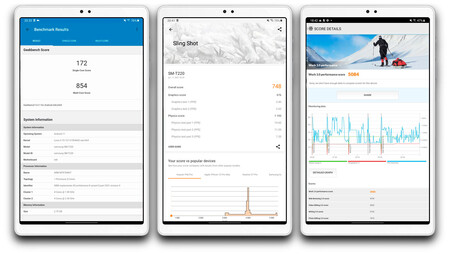 To the excessive containment of the included chip is added how much Samsung's software weighs. If One UI (in its latest version, 3.1) does not do much favor to powerful devices, on a tablet like the Samsung Galaxy Tab A7 Lite it is a real drag. The layer is not complete (missing elements such as Bixby, for example), but it does have a good number of added apps (Microsoft and Facebook), it has great customization capabilities, it includes Samsung Kids kids mode (very useful in this tablet) and offers an experience well adapted to tablets. By reducing the load of apps and services in the background (by dint of uninstalling) the experience becomes somewhat smoother.

Given the tight hardware, it cannot be said that the tablet consumes excessively. In fact, autonomy is one of its strengths: with regular use it can last several days without a single recharge. Playing the game, the consumption is somewhat high, as with streaming (especially if the screen brightness rises). In general, the ten hours of screen usually give them (when One UI has already calibrated the usual consumptions).

The load is not exactly fast. Based on our tests, performed with the included 7.8W charger, completely revive the tablet it is a task that lasts almost four hours. Here are the recharge times:

A tablet is not the most comfortable device for taking photos, even if there are those who go on an excursion iPad in hand. With the eight-inch screen of our protagonist, it cannot be said that it goes wrong in terms of comfort, but it does so in terms of results: the Samsung Galaxy Tab A7 Lite does not have good cameras. It shows with the first photo.

The camera application is severely curtailed as it lacks such key options as night mode. It does offer portrait mode, with certain difficulties: good software clipping and better results in terms of sharpness and naturalness for the rear camera. With the front you have to have a lot of light to make a decent shot.

The quality of the photos is not bad if the lighting conditions are acceptable, but it completely wrecks as soon as some lighting is missing. The software tends to raise the ISO to compensate, an action that creates more noise than a wrecking ball in full swing. Even if it is not at night.

With good lighting, no bad photos come out (at least they are good for saving). The tones are muted and there is a lack of detail, even with the naked eye.

It seems that the image was taken in full darkness, but no: there was enough light. Even so, the rear camera had to raise the ISO to almost 8,000, with all the noise that was involved.

The front camera accuses the small size for the dimensions of the photo: low resolution, loss of sharpness and little vividness in the colors. Still, it doesn't take bad photos if the lighting is good, even in portrait mode (and auto HDR).

Here are some samples with photos taken by the Samsung Galaxy Tab A7 Lite tablet.

Samsung Galaxy A7 Lite, the opinion of Xataka Android

Small tablets are not very common, this provides a positive point for our protagonist. The Samsung Galaxy Tab A7 Lite is very handy, It is striking for how compact it is and does not offer poor quality finishes, neither in design. Wow, it looks better on the outside than on the inside.

It is a pity that Samsung did not include a more capable processor, the feeling that prevails constantly is that of 'lag'. For all. It is difficult for the tablet to respond to the keystroke, the Samsung Galaxy Tab A7 Lite takes time to open the applications and even sees the operation hampered once they start. You can play and watch content without too much trouble, but the feeling of limited hardware is permanent.

Good drums, the sound is at a very good level, not bad multimedia support and can serve as a tablet for children. In addition, the price works in your favor: the 169 euros that it is worth are not exaggerated. And part updated to Android 11 and One UI 3.1, another detail to take into account. For limited budgets, and as long as you are looking for a device with guarantees, the Samsung Galaxy Tab A7 Lite is not a bad option. Despite its clear limitations.

The phone has been provided for testing by Xiaomi. Can inquire our policy of relationships with enterprises.