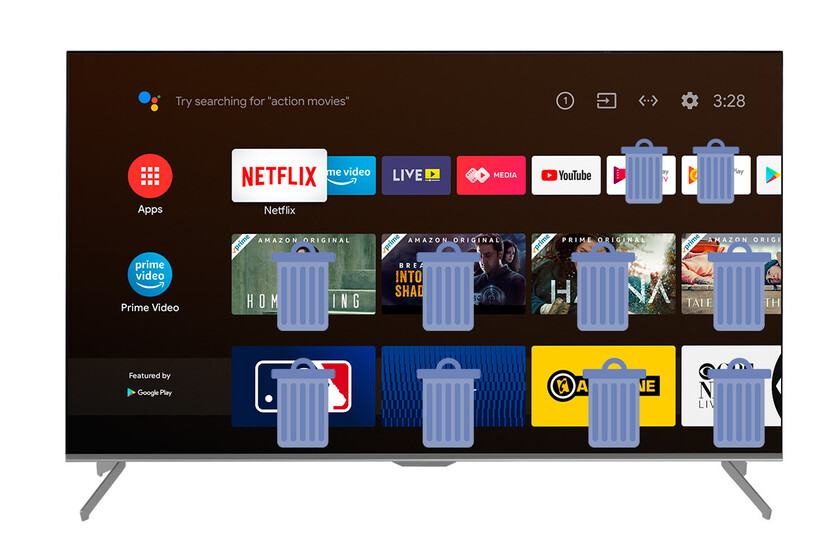 Android TV is basically Android, but on TV. This brings many advantages that we have in Android mobiles, but also disadvantages, such as pre-installed applications that we are not interested in, sometimes called bloatware.

Some TV manufacturers add a few pre-installed partner app accounts that you might not be interested in the least. If you want to remove them from your sight, we will tell you how to remove apps from Android TV that don't interest you, either by uninstalling or disabling them, even those that resist.


How to uninstall or disable apps on Android TV

In many ways Android TV behaves the same as Android on mobile, despite the fact that many advanced options that we have on mobile are lost. Something that is possible is uninstall and disable apps easily, as long as they are not applications that have been installed on the system partition.

Some applications that come pre-installed on the TV can be uninstalled without further ado, even though they already came. This is the best case because, if you are not interested, you can make them disappear completely with a few simple steps. The first of this is to go to the Settings. 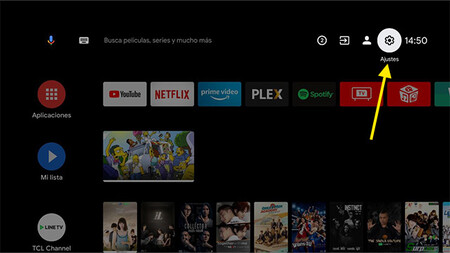 The menus themselves may vary depending on your TV, although it is quite likely that you have a menu of Applications or a similar name. If you don't see it at first glance, it may be inside another submenu. 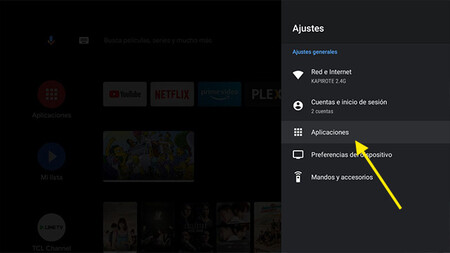 For the moment, ignore the section Show system apps, because those you will not be able to uninstall or disable them. Instead, look for an application that doesn't interest you in the list and press the OK button to view its information. 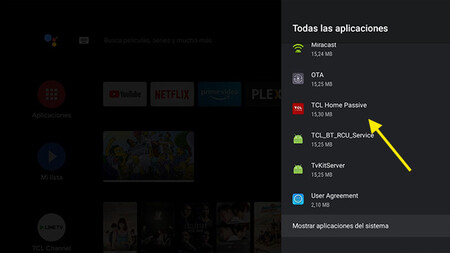 If it is an application that has been installed afterwards -sometimes the TV will install it where its initial configuration process- then the menu will appear. Uninstall. This uninstalls the application in a traditional way, that is, there is no trace of it on the TV. It is the best case. 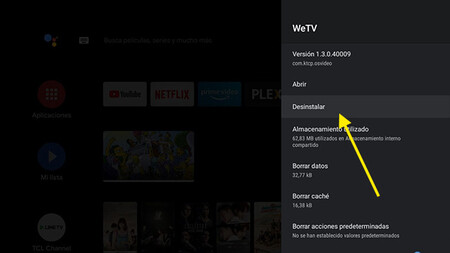 However, it is quite possible that you will come across applications that do not display the menu Uninstall. Instead you will find Disable. Disable means that the application will continue to be on TV, although its data will be deleted and for practical purposes it will not appear anywhere. This is the second best case. 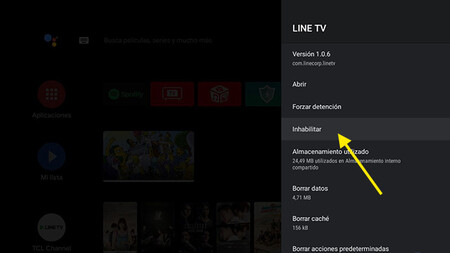 With that done, you've probably wiped out most of the bloatware on TV, but there will still be pre-installed system apps, which you can neither uninstall nor disable from the menus. Although it takes a few more steps, you can also get them out of the way.

How to disable system apps on Android TV

In the application list, tap Show system apps and look for other applications that you want to get rid of. As always, you should keep in mind that some of these applications may be necessary for the TV to work properly, so it is important that you act with caution and do not mess around unless you know how to undo your changes in case something goes wrong .

Look for an application that you do not want and, when you see its information, you will see that it does not appear or uninstall or disable. Maybe it will appear to you Uninstall updates which, if you want, you can use for the moment. When you are on this screen, take the opportunity to copy the name of the app package. It appears just below the version: in the screenshot below, it is com.tcl.waterfall.overseas. 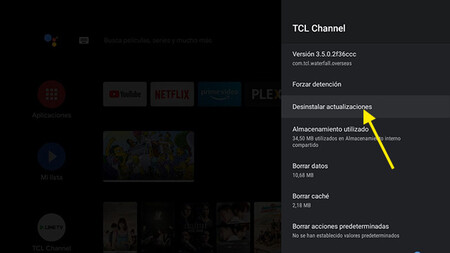 The way to disable these applications is the same as in an Android mobile, although due to the characteristics of the TV the steps may be a little different. You shall activate development options on TV, with the classic trick of clicking the build number multiple times.

That is, first you need to go to the section of Information and then scroll to Compilation. Press the OK button (or whatever method you have to accept things on your TV) several times in a row until a message indicates that the development options have been activated. 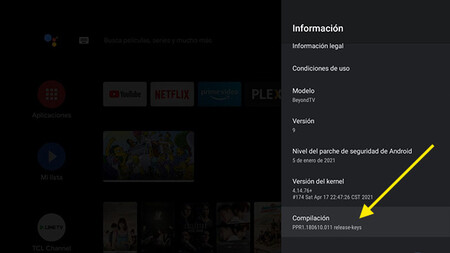 Go back in the settings and you will see that there is a new menu within Device Preferences. The menu in question is called Developer options. Again, keep in mind that the menus may vary slightly depending on the version of Android or the customization that it carries. 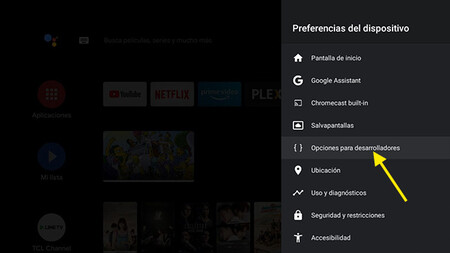 Go into the developer options and scroll through the list until you find the option USB debugging, within the section Depuration. A pop-up window will ask you for confirmation. 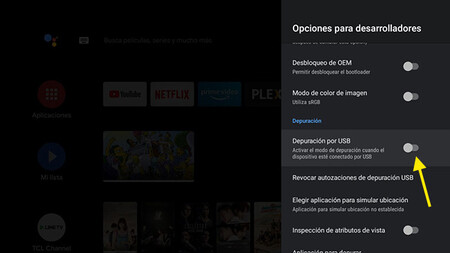 Go back to the device settings menu and go back to Information. Enter the menu Condition and take note of the IP adress local to which the TV is connected. If you already know this address by any other method (for example, looking at it on the router). 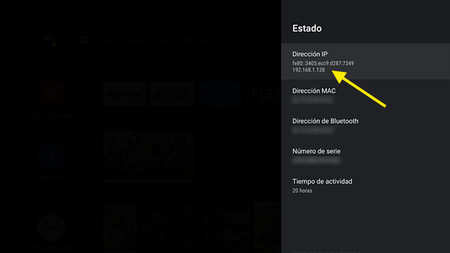 Next you must connect by ADB to TV. You have several methods to do it, from installing ADB on a PC to using applications like Remote ADB Shell. The application is free and is a good option as it involves far fewer intermediate steps than using ADB on the PC.

In Remote ADB Shell, enter the IP address of the TV in the corresponding section and press Connect. You do not need to change the port, which is 5555 by default. The first time you connect, the TV will ask you if you grant access to the device to connect through ADB. You must give it to him. 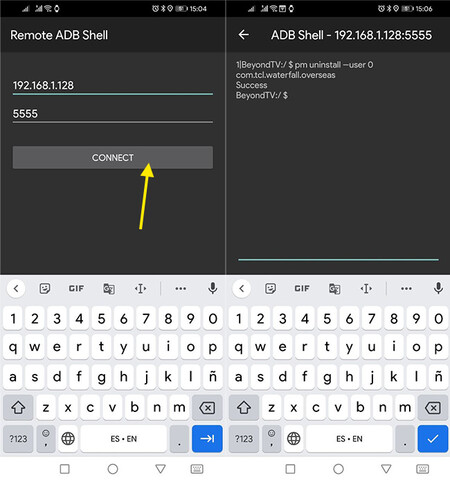 Now comes the important part, write the command to disable the application. The command needs the name of the application package, which we noted a few steps back. The command is the same one used to disable pre-installed applications on Android mobiles: pm uninstall -k --user 0 nombre.del.paquete, Changing package.name by the above package name. That is, to disable com.tcl.waterfall.overseas, you will have to write:

If everything went well, you will receive the answer from Success. The application will be disabled and therefore it will not be able to start nor will it be shown in the application launcher. If you change your mind later, you can reinstall it with the command package install-existing nombre.del.paquete.