When you configure a mobile phone or tablet with Android, the operating system asks you what is your preferred search engine and there you can choose between four options that rotate every quarter. Google, Bing, DuckDuckGo and others appear in groups of four, although this only occurs in Europe as the European Commission forced Google to take this action following a lost trial for abuse of dominant position. 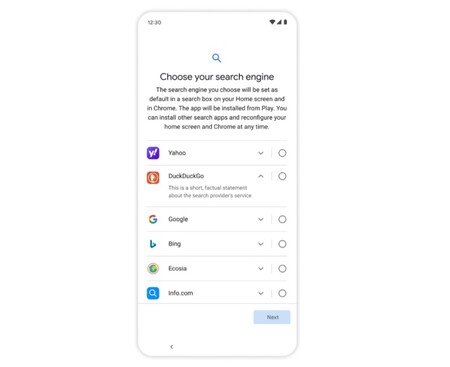 Apparently everything has been caused by a number of complaints about this auction model because the search engines themselves do not know how much their competitors bid. The bids are made blind and the three who decide to spend the most money to appear among the optional search engines of Android are the ones that finally make the list. A list, as we said before, that is renewed on a quarterly basis.

Google's own account on its blog that it has made the decision to suspend these auctions and that from now on the search engines will have the option to appear on the Android selection screen for free. At the same time, the company is already increasing the number of services available over the four they initially displayed.

Appearing in the Android Internet browser selector will be free from September.

Google will show up to 12 search engines on the Android selection screen and the order will vary depending on the country. the first five will be the most popular in each territory. After these first five, another seven engines will appear in random order. With this, Google is confident that criticism of its system will cease. These changes, by the way, will take effect from September 1, for the third quarter of the year.

However, the CEO of DuckDuckGo has already been in charge of making it clear that the new system must be welcomed with caution and complaining that these changes, he says, should have been made three years ago, in 2018, when Google received the fine from the European Union . As has happened so far, the search engine selection screen will continue to display only during Android system setup that is being handled.