Google launches Android 12 Beta 2.1 to fix some errors in the Pixel

Two weeks after the launch of Android 12 Beta 2 we see how Google launches a new beta of the next major update of its mobile operating system, although this time it is a minor update.

On Android 12 Beta 2.1 we will not find any novelty, just bug fixes that during these days have been reported by users who installed Android 12 Beta on their mobiles. Google has to take great care of the stability of this new version, since it is the most downloaded beta in the history of the operating system. 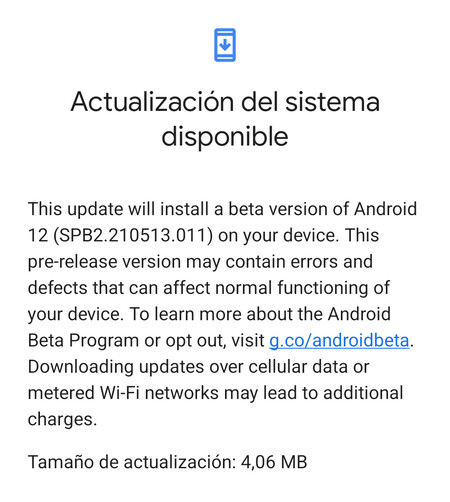 Updating Android 12 Beta 2.1 It is now available to download from Pixel 3. If you have a Pixel with Android 12 Beta you can force the update OTA since Settings> System> System update> Check for updates. The update has a weight of about 4 MB.

As I said at the beginning, the novelties of Android 12 Beta 2.1 are to correct everything that the second beta broke two weeks ago after updating, with errors that affected the daily use of the device, since sometimes they prevented unlocking the phone or not being able to access to the notification bar and quick settings from the lock screen. The list of fixed bugs is as follows:


The next update of Android 12 Beta will be next July, with the launch of the third beta, which is expected to arrive in about two weeks. In this version it will come with more news.