Almost three years ago Google released Measure for ARCore-compatible mobile devices. It is, or rather, it was an Augmented Reality application to measure distances, but now we discover that * has been discontinued by the company.

Google Measure, or Google Measurement of our language, began its journey in 2016 as an application for Tango devices. Then in 2018 with the arrival of ARCore the application became compatible with our mobiles. Now in 2021, after five years of life, we see with a discreet statement Google reports the death of its measurement application.

Google informs in the Measure tab of the Play Store that "the application is no longer supported and will no longer be updated. Users who have it installed can continue using it on compatible devices."

This means that Google Measure It can no longer be downloaded from new devices, it can only be downloaded again if we had previously installed it. The application no longer appears in the Google Play search engine, so if we have not saved its download link we will have to search for it from Play Store> My applications and games> Library. 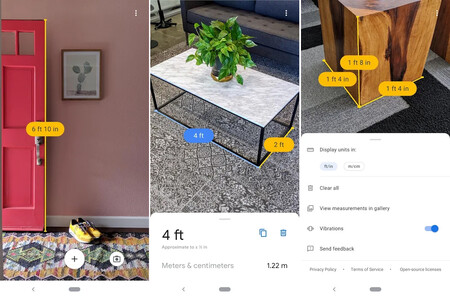 Google Measure It had not been updated since February 2020, but Google's decision to remove it has caught many of us by surprise, since Measurements was Google's alternative to Apple's Measurements application.

With this decision, Google stops offering its users its own solution to perform measurements using the camera and augmented reality, since it turned our mobile into a measuring tape. Now if we want to make measurements from our mobile we will have to use other AR appssuch as AR Ruler or ARPlan 3D.