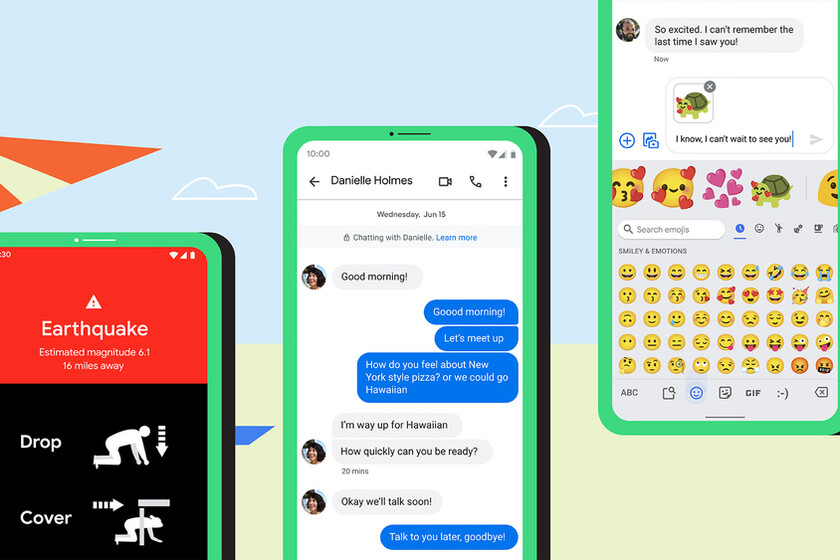 Google wants to welcome you to this summer with the announcement of the six new features coming to the Android ecosystem over the next few weeks to the more than 3 billion active devices around the world.

The company has announced important news in order to Android Auto, Google Messages, keyboard Gboard, the ** Google Assistant, Voice Access and its earthquake alert system. These are the news:

Google reports that they are prioritizing countries most at risk of earthquakes, with which they hope to launch their alert system in more countries in the coming months.

With Google Messages We will no longer forget that important message that we have received, since during the next few weeks an update will activate the featured messages. We can highlight messages, photos, videos or audio notes to be able to have everything that is most important in the 'Featured Messages' section.

Use more apps with your voice

The Google Assistant continues to improve its new shortcuts to allow you to use applications with your voice. You are expanding this feature to more users and expanding the compatibility with more applications.

Voice Access, the accessibility application that allows us to control our mobile with the voice announces that through its Beta it begins to test the gaze detection so that it only works when we are looking. This way, the user can talk with his friends and use his phone in an easier and more natural way.

This accessibility tool also improves password entry. Now in the password fields the user will be able to enter letters, numbers and symbols. You can say “word with a capital P” or symbol names (like “dollar sign” to enter a $), to name a few examples. Google has not announced in which languages ​​this feature will arrive.

Finally, Google announces important news for Android Auto, which now becomes more customizable You can customize the home screen from your mobile and manually activate dark theme in your car interface.

Android Auto also makes it easier to navigate the content of multimedia applications thanks to its new tabbed navigation as we saw a few days ago and a button from A to Z on the scroll bar.

Google announces the availability of new charging, parking and navigation applications for electric vehicles for Android Auto. You can also access your favorite messaging apps from the home screen and the actions of reading and sending new messages from applications such as WhatsApp or Messages reach everyone.