Apple announced during the developer event, WWDC 2021, that it is expanding iCloud with a new feature set in a service called iCloud + or iCloud Plus.

The cloud storage service will now include access to a free VPN, plus email security updates and unlimited storage for what HomeKit-enabled home security cameras record.

One of the most important news is related to your cloud. In its obsession with privacy, Apple has added new protections when it comes to browsing and connecting on the Internet, such as Private Relay, essentially a built-in VPN. Although the company it has not come to call it a VPN, in practice, the functions that they have defined do the same.

The VPN, which he has called Private Relay, will direct your internet traffic to mask who is browsing and where that data comes from. For this task, the information goes through two different systems. One that is responsible for hiding the user's real address with an anonymous IP so that the web cannot determine their location. The second of them decrypts the web to be visited and forwards it to its destination.

It is practically what a VPN does, although with fewer customization functions since, for example we can't choose our location, this being one of the main attractions of VPNs.

Other features as part of iCloud + 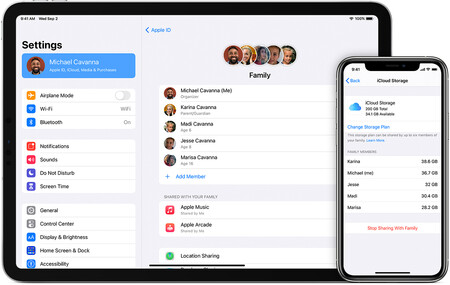 This cloud service will also offer a new "disposable" email feature, called Hide My Email, which allows its users to create one-time email addresses that will be forwarded to your real account. In this way, the user can provide an email that is not their real one to a service they do not trust in case it starts sending spam.

On the other hand, Apple's cloud will also include unlimited storage for videos that Pick Up HomeKit-Enabled Home Security Cameras. Currently you have to pay for at least 200GB of iCloud storage to record video from a camera.

According to The Verge, it is assumed that all features are included in existing iCloud plans at no additional cost. However, Apple did not say if the feature would be available through its cheaper plans, which currently do not support HomeKit video storage.

At the meeting, he presented the new version of macOS Monterey, announced news in Swift Playgrounds, iPadOS 15 and FaceTime. Another novelty was your Apple Music Spatial Services with Dolby Atmos (space service) which, as we expected, is available from today with high quality music.