An artificial intelligence simulated 100,000 times the entire Eurocup 2021 to predict the winner 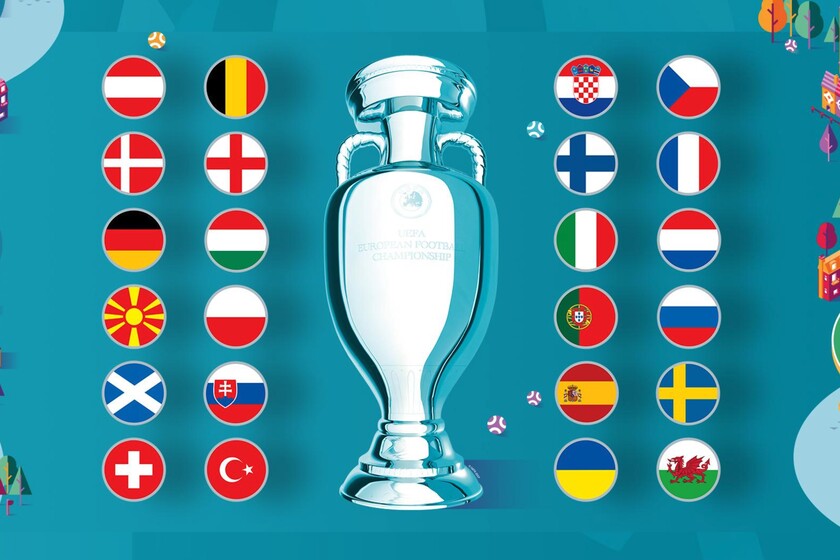 UEFA EURO 2020 or Euro 2021 starts today, and for the first time, in addition to being held outside the planned year, it will take place in different venues, Seville being one of them. Football fans and national teams know and feel if their teams are favorites or not, but always it is difficult to predict how the tournament will go.

Research group Zeileis has set out to predict who will win the tournament based on probability. To do this, they have used a hybrid model that combines data from four advanced statistical models using the method called "random-forest approach" (random forest focus), a very powerful technique for analyzing large amounts of data. As part of the team that has made the forecasts is Andreas Groll, who already did something similar with the 2018 World Cup in Russia, also simulating the entire tournament 100,000 times with artificial intelligence.

Spain, on the podium of probable winners 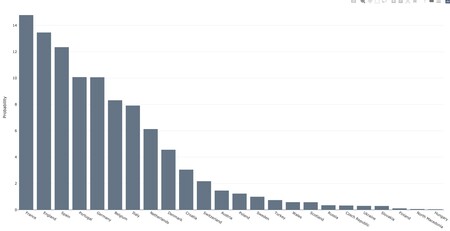 To make the forecast, as we said, four sources of information have been combined:

To train the random forest model They use data from tournaments ranging from EURO 2004 to the last one held, EURO 2016 of which Portugal was the winner. And who is the favorite this time? The prediction matches that of many experts: France, with a 14.8 probability of winning. It is followed by England with 13.5% and, surprisingly, Spain with 12.3%. It is strange, because the national group is said to have even difficulty moving between groups.

The graph of the performance throughout the tournament, which can be consulted interactively here. In it we can see that from the beginning, Hungary is the team with the least probability of passing the group stage, but that the probable winner, France, is not the team that will have it easier to pass the groups. That place is occupied by England, with 94.6% and Spain, with 94%. 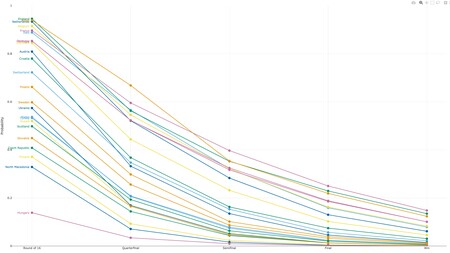 Spain is still the favorite team to go from phase to quarterfinals. From there, France becomes the team most likely to pass the round and win Euro 2021. Finally, the researchers show a useful interactive graph in which we can observe the probability that, based on all the commented variables, a certain team beats another. The greener, the more likely, and the more brown, the less. 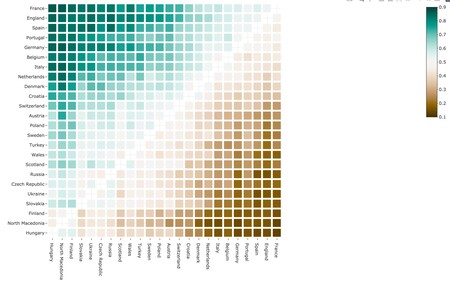 ZAO, the Chinese MOBILE APP that through DEEPFAKE turns you into DICAPRIO in SECONDS

So it was at the World Cup in Russia

At the 2018 World Cup in Russia, the prediction model guessed which teams passed the first phase in six of the eight groups. In addition, he matched the exact order of those groups in five of the eight groups. If he was not successful, it was because Germany, one of the favorites and winner of Brazil 2014, suffered a debacle and finished last in their group.

The model was very successful in the group stage, but not in the playoffs

And that is precisely why he failed in the rest of the predictions for the rest of the tournament. He gave Brazil the second favorite, which was eliminated by Belgium and which in turn was eliminated by Belgium. On the other side of the table he failed with Spain and Croatia, not knowing how they would go far / and reached the final thanks to the fact that they avoided crossing with France in the second round, as they had planned.