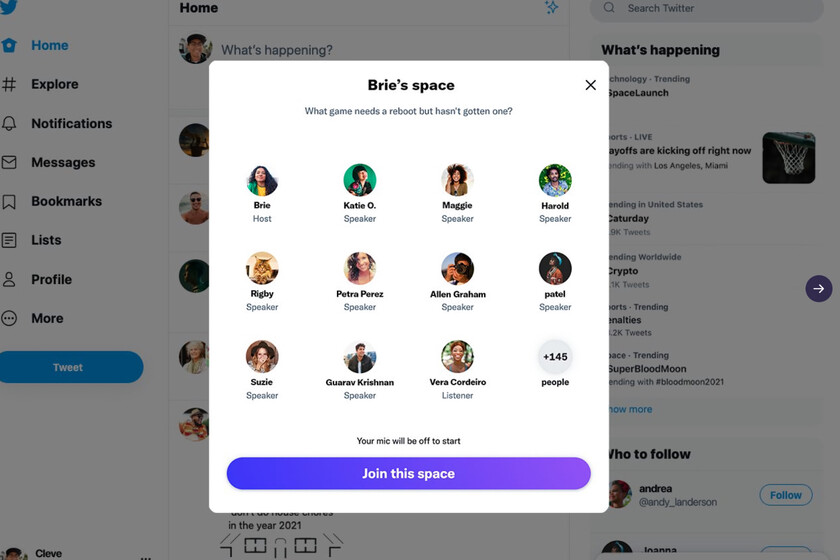 Earlier this month, Twitter launched its social audio rooms called Spaces for user profiles with more than 600 followers, (since March it was available for some users). The new service was Twitter's entry into new terrain that successfully inaugurated Clubhouse and that has led many other social networks to offer their similar proposals.

Until now, Twitter Spaces was only available to use on Android and iOS, but today the company announced the deployment of its group audio chat platform. for the web, both desktop and mobile. 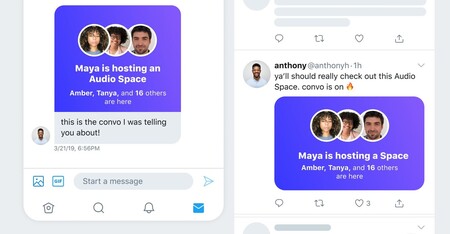 With this announcement, users will be able to join Spaces from their web browser to hear what is being said in the rooms, set a reminder to join a scheduled audio chat and other features that were previously only available on mobile. Of course, for now you cannot host an audio room from the web, unlike what happens on mobile. For the moment it is only to attend the meetings.

For now the function not visible at least among many of the users in Spain.

our focus areas:
- infrastructure and listening UI that adapts to your screen size
- setting reminders for scheduled spaces
- accessibility and transcriptions pic.twitter.com/Wb0DQktkhD

This announcement from Twitter Spaces also comes with other news to the general service. Twitter has indicated that its listening interface now adapts to the size of the screen of the device you are using. There will also come a new design of Spaces transcription for the web.

Regarding the transcription, it must be remembered that when creating or speaking in a space for the first time, people are asked to give their consent for what they speak in the spaces to be captioned in real time with the aim that these audios are also accessible to people with hearing problems.

What remember twitter, anytime while organizing, listening or speaking in a space, anyone can press the Show Captions button And by doing so, you will be able to view live captions (a few seconds late) from any hosts or speakers who have consented to having their speech captioned in the slots. If a speaker wants to activate subtitles after starting a space for the first time, they can do so in their device settings.

A few weeks ago the social network had advanced that they were working on a solution in which Twitter services will display captions automatically and any participant can activate the subtitles at any time.