this is living with unlimited space in Drive and Photos 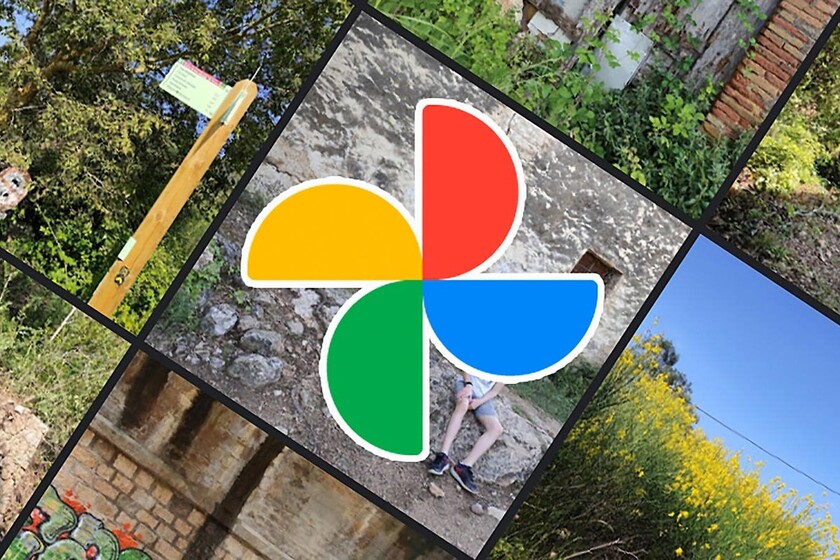 There is not much time left for the ultimatum given by Google Photos to its users to be fulfilled, but not everyone will suffer the loss of unlimited storage in multimedia content: those who maintain a GSuite account, and have not yet switched to Google Workspace, have from unlimited space in Photos and also in Drive. A huge advantage that in a week will be even greater.

The end of unlimited space in Google Photos is approaching, there is just over a week for applications subtract account storage with everything they sync, including photos compressed by Photos itself. Of course, there is an irreducible group of users whose account can not only make backup copies without worrying about space, they also have unlimited storage on Google Drive. I am one of them. And I'm going to tell you about my experience.


Without space concerns, you live much better 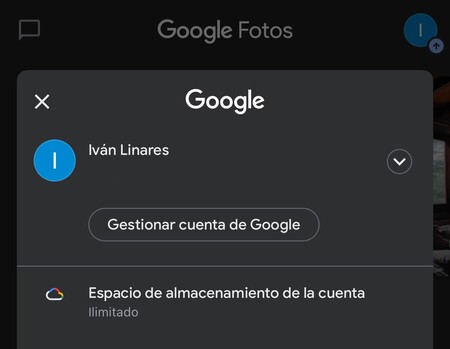 The uproar that arose in 2020 around Google Photos is on its way to reaching its announced end: in June the platform will deduct the weight of the photos from the space that each user has in their account. By default they are 15 GB free, a size enough for those who are not very fond of filling their phone with photos and videos. The problem comes for all those who, like me, accumulate tons of content for leisure and also for work. There is no doubt that losing the great quality that Google's service had, no matter how much the content was processed before being saved, is a great annoyance.

In my case, I chose Google Photos years ago as my backup of choice for its ability to back up content. Given that I do a lot of mobile analysis, and that I am more clueless than someone who even forgets to breathe, more than once it has happened that I returned a phone to the brand without having remembered before taking the photos and videos for analysis. Since years ago I went from Microsoft OneDrive to Google Photos that stopped happening to me.

For me, the big advantage of Google Photos is not the storage itself, what I appreciate the most is its ease of making copies in the background (except on the iPhone, things from Apple), the option to have my content accessible from anywhere (web browser included) and the added functions that Google is adding to its platform; like image recognition: searching for something concrete in my gigantic synchronized gallery is a matter of seconds, the AI ​​is (threateningly) effective.

Checking how the available space is not reduced even if you upload all the copies at their original size is a great pleasure; with the added peace of mind that the space will not be reduced from June

Ok, space is not what I appreciate the most, but this does not mean that I stop taking advantage of the unlimited possibility that Google offers me. Since I don't have to worry about what I save, at least as long as I continue to pay for GSuite (which will probably be for quite some time), I use Google Photos to synchronize the reels of my personal mobiles to their original size, I activate the backup in that account for each of the mobiles that I analyze, I synchronize the RAW images of the reflex To back up the photo sessions, I have started using Google Drive as a content repository (applications like Localcast allow it to be uploaded to TV thanks to Chromecast) and I am considering saving a backup of the computer in the cloud. We will have to take advantage of this absence of limits. 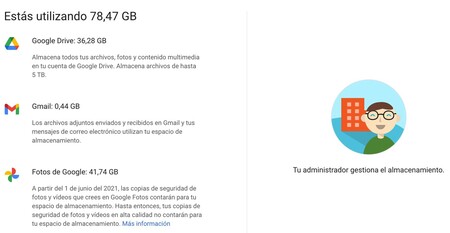 Although I actively use the account, I do not fill it out too much. And I wouldn't have to worry either (I hadn't looked at it until now)

It is true that Google's move will affect the majority of users who made backup copies in their cloud, but it is also true that, with a little restraint, the 15 GB that the company gives to each account should be enough to keep a phone gallery safe. Even for those parents who add a mountain of photos and videos of their children every week (I attest). The problem, yes, is that the amount offered by Google is not only for Photos, but also for Drive, Gmail and other services integrated into the account. And the mailbox also tends to eat up a lot of storage (Gmail stops working if the account fills up, be careful with this).

I came to GSuite looking for take my professional mailbox to Gmail to take advantage of the advantages of 'push', this was my motivation to embark on a paid account. From there I discovered the unlimited benefits of Drive and Photos, with this feature Google has finished conquering me. And I have a remarkable amount of added tools, such as the huge GSuite management center (which I don't understand half of, I have to be honest) or the advanced features of Google Meet.

The bad news is that, currently, You can no longer acquire a GSuite account like the one I have: Google migrated the services to Workspace ending with the unlimited advantages (except in the 'enterprise', which are worth a fortune and are not suitable for everyone).

I currently pay 9.36 euros per month and get the professional Gmail mailbox for my private domain, unlimited storage in Drive and Photos, full Google Meet and device control tools. These are the features that I take advantage of

My tip is maximum space is freed up before June arrives to check how much is actively used for Google Photos. And, if the 15 GB is very tight, Google One offers extension for a very cheap cost. That as long as the features of Photos are appreciated, because there are many other clouds where to store the copies of the reel (like Amazon Photos if you pay Prime). Just keep trying until you find the perfect replacement for Google Photos.