This is 'Arqueras de Nand', the Spanish board game that helps to learn SQL language 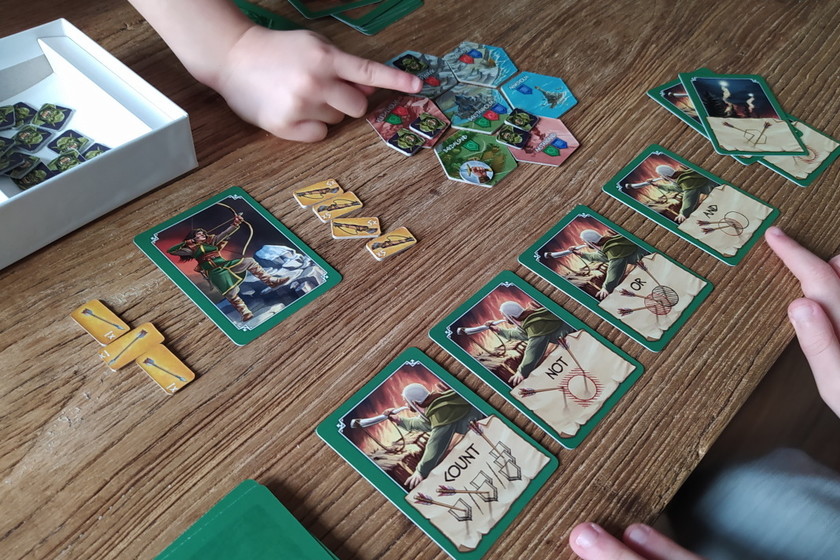 The Nand Valley has been invaded by savage hordes of orcs, and the key to defeating them lies in their detachments of archers knowing how to harness the cliffs to their advantage and coordinate with the warriors. And for that, they must use logical operators of the SQL language.

Yes, you read that right: 'Arqueras de Nand' is a board game with a fantastic setting whose purpose is to teach us how real databases work. Its creators, Spaniards, launched a Kickstarter campaign at the time that multiplied by six the € 3,000 that had been set as a target.

Thanks to this campaign, its 650 sponsors were able to obtain as a reward, for a minimum price of 15 euros, the base game in English and Spanish: "We resorted to Kickstarter, more than anything, to reach more people, because we are not a company board game production ".

In fact, they are not even a company. Who talks to us is Pablo Garaizar, creator of the game and professor at the University of Deusto with training in psychology and computer engineering who investigates aspects related to technology and education at the Deusto LearningLab.

He tells us that the LearningLab has been developing educational platforms and apps for children for some time, as well as workshops that thousands of them have already attended. But add that, Thanks to his children, he began to get into the world of board games and that led him to suggest to his boss that they broaden their range of educational resources.

From the Moon to fantastic worlds (or from binary to SQL)

'Arqueras of Nand' is not the first initiative that arose as a result of that idea: in 2019, before entering the world of SQL programming, Garaizar already successfully launched another campaign on Kickstarter to launch 'Moon', another game table focused on that occasion to teach how to operate with binary numbers.

Moon simulated by means of letters the operation of a 4-bit computer (specifically that of the software of the first lunar module). They were afraid of not being successful, because of the abstract nature of the approach and because "Its educational component is always a small slab in the playful world".

But the result was "amazing": they achieved many more sales than expected, and also a large community was created around the game.

"The idea is to continue insisting that there are many things in computing that can be told in another way. At Arqueras we wanted to emphasize teaching logical operations in a very visual way, that each time we execute one [equivalente a una acción en el juego] what we have done is reflected on a map ".

"We realized that the board we were creating could be like a table in a database and that the operations that the archers were going to carry out were to select some parts of the board and leave out others to make their attacks. And that it looks a lot like normal SQL database usage. " 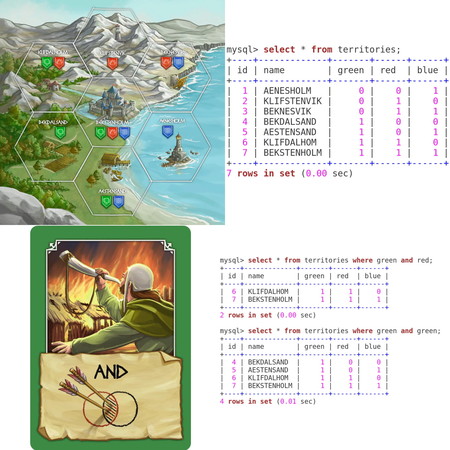 The game board and one of the action cards, together with its 'translation' into SQL.

The project website tells us that the only letter that doesn't work exactly like its namesake SQL operator is "Count": in the game it allows us to shoot arrows at the territories that contain a certain number of banners, while in a real database, it would be used to count rows.

For all audiences (and copyleft)

Garaizar tells us that 'Arqueras ...' are two different games: an educational one ("Due to its level of difficulty, it would be recommended for children from 8-9 years old"), but also another that works for all audiences if the educational aspect is not emphasized.

"We have tested it at game fairs and people value it for its story and how it ties in with the game's mechanics. For that reason, and for the illustrations [realizadas por Pedro Soto, ilustrador profesional de juegos de mesa, y responsable del apartado gráfico de juegos como el de 'Águila Roja' o el de '1911 Amundsen vs Scott']".

A remarkable aspect of 'Arqueras de Nand' is that it's a copyleft game. Its creator, who proclaims himself convinced of the cause of free software, tells us that

"We have been developing materials that we release as copyleft for some time because we are a university and we do not have a commercial purpose, what interests us most is that our projects reach many people."

Thus, Garaizar himself gives us an example, a school would only have to buy a copy of the game and then make photocopies to allow having a copy in each class.

What's more, "the whole game is based on language independent illustrations, and the only thing that needs to be translated is the instruction manual ", which will be available" in a lot of languages: Spanish, Catalan, Basque, English, French, Italian, German, Polish, Russian ... ".