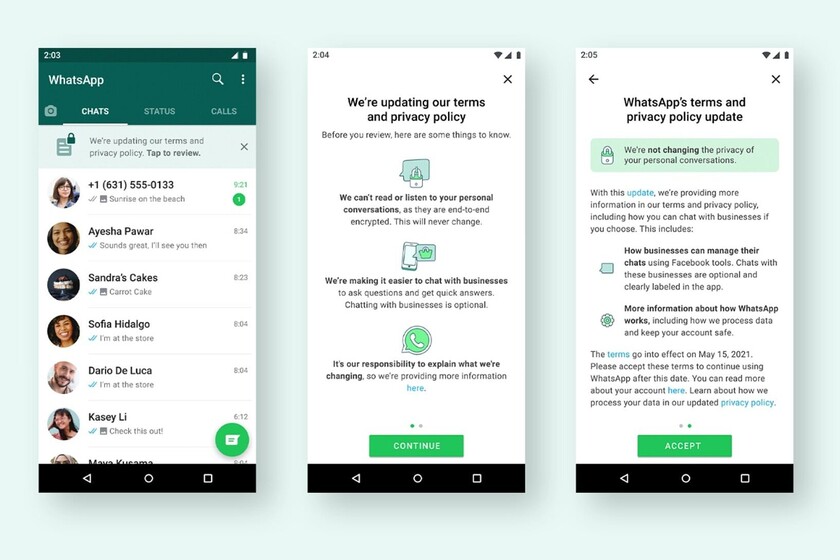 On May 15, the new privacy policy comes into effect, after being postponed in January due to the controversy unleashed (which caused Telegram and Signal to grow a lot in user registrations).

The company announced that as of the new date, May 15, whoever does not accept the new conditions will see their account deactivated. That is, it was either accepted or we could not continue using the platform. However, today they have communicated that this will not be the case and the behavior of the accounts will not be modified for this reason:

"No accounts will be removed on May 15 due to this update and no one will lose WhatsApp functionality either. We will continue to remind people for the next several weeks."

How to CHANGE NUMBER in WHATSAPP without losing MESSAGES

Those who do not accept will only receive kind reminders: the example that complaints have been a success

According to WhatsApp, the majority of users who have received the new terms of service have accepted them. Those who have not done it yet because they were postponed until the 15th, will not see their account deleted or losing functions as they already warned from the Facebook instant messaging service.

However, warn that people who do not accept will receive reminders to accept in the future. They have not communicated the frequency of these notices, but if it were high, many users would accept only to stop seeing them.

In any case, It must be remembered that the new WhatsApp privacy conditions did not affect European users, so nothing will change in any case. The striking thing was that being this way, millions of users could remain without using their communication tool if they did not accept those conditions that the GPDR did not apply.

Either because of the complaints in social networks of many users, or because of the aforementioned growth of Telegram or Signal, the truth is that WhatsApp first postponed these measures and now has made them not matter too much, so victory is total for your opponents and for those concerned about the integration of some of their data with that of Facebook. Something that, it should be remembered, the company always claimed that it would never do when it bought WhatsApp. Since 2017, we know that they lied.

Via | The Next Web