The Google Assistant will add widgets to integrate third-party applications

The Google Assistant It has also announced during the first day of I / O 2021 some of the news that will reach users throughout this year, and some of them will arrive to improve their integration with the third party apps.

To improve this integration with the Assistant, Google launches new tools development so that applications improve their voice commands and can be integrate into the wizard's own interface.


This will be the integration of apps in the Google Assistant 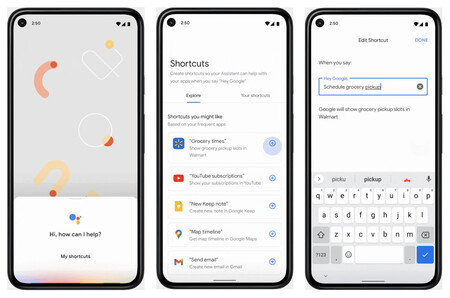 To improve the new shortcuts, which we perform certain actions with our voice, we see how with Android 12 the detection of shortcuts is improved. From the new version of the operating system it will be easier to find all the voice commands compatible with the applications.

The new Android 12 Shortcuts API will automatically add those shortcuts to the Google Assistant so you can launch it by voice, as well as customize your voice command. In addition, they will add the command "Ok Google, shortcuts" to access the settings.

But the most important novelty are the new widgets that third-party applications can now integrate into the Google Assistant. Until now only Google showed widgets in its assistant, such as the weather, control the volume or the bulbs, but throughout this year we will also see third-party widgets.

This means that in the near future we will be able to ask the Google Assistant "how many kilometers have we traveled with Strava?" and that the Assistant shows us a widget with Strava's information and graphics, or to cite another example, ask the Assistant to place an order for food at home and ask us directly in the widget what we want to order.