notify us by voice of who is calling us

We are already used to the mobile phone showing us on the screen who is the person who is calling us by collecting the name from the contact list or, if they are not, showing the phone number. But when we are using headphones of some kind it does not happen in the same way because the normal thing is that only the call tone soundsNor was there the possibility of the contact being announced out loud.

However, that seems to change, at least in the Pixels with the future Android 12, although Google usually uses the Pixels as a launch for new functions that end up being implemented in the rest of the Android ecosystem. Google phone already uses the famous Caller ID, or 'Caller ID', by voice in your application although you have not yet activated it for all audiences.


The Google Assistant will tell you who is calling 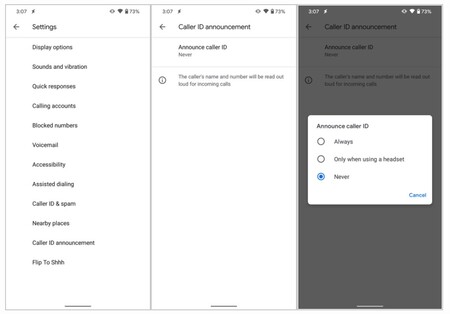 As often happens in these cases, it was Google's own Phone app that anticipated the changes that were to come. These changes were present in the code although it was still latent code that had not been activated. However, it seems that Google has finally decided release the update to start reaching all regions.

This new functionality will allow Google to use the voice of its virtual assistant to announce to us, through the headphones or the speaker of the phone itself, who is the contact that is calling us. It will be a functionality that we will have to activate as it will be deactivated by default, and It will offer us several options when it comes to having it active.

We can tell Google Phone to never announce who is calling us, to announce it only when we have the headphones on (and theoretically we have the mobile away or stored) or to always announce it, regardless of what we are doing at that moment. This last option, that of 'Always', is the one that will use the speaker phone to tell us who is calling us at the same time the phone's ringtone rings.

The funcionality is currently expanding through the different regions of the planet and it may take some time to reach us. For us, for example, it has not yet been activated. The feature arrives a few weeks after Google Phone call recording landed, the app becoming more powerful and versatile.