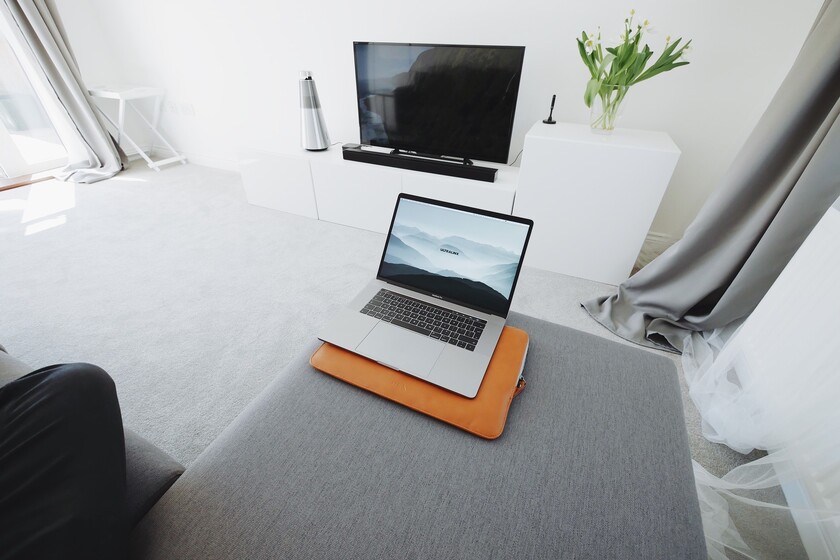 This week we learned that the European Parliament intends to increase the legal mechanisms available to withdraw the unauthorized retransmission of live sporting events, even demanding the interruption of broadcasts in a maximum of 30 minutes. A decision they have made after having conducted different studies on unauthorized IPTV identifying its impact.

They are two studies in space, Challenges faced by organizers of sporting events in the digital environment Y Illegal IPTV in the European Union: Investigation of Online Business Models Infringing Intellectual Property Rights, those who shed light on the number of people accessing unauthorized IPTV and the ranking of European countries that most consume this type of broadcasts through the internet.

The scale on consumption of unauthorized IPTV among member countries varies significantly from one to another as we can see in the graph that we find on these lines and that it belongs to the percentage of the population consuming these contents in each of the 28. The set of data belongs to 2018.

While the community average is 3.6% of the population, the Netherlands, Sweden and Spain are at the top. In the end, the countries with the lowest percentage of inhabitants consuming unauthorized IPTV are Romania, Bulgaria and Poland. 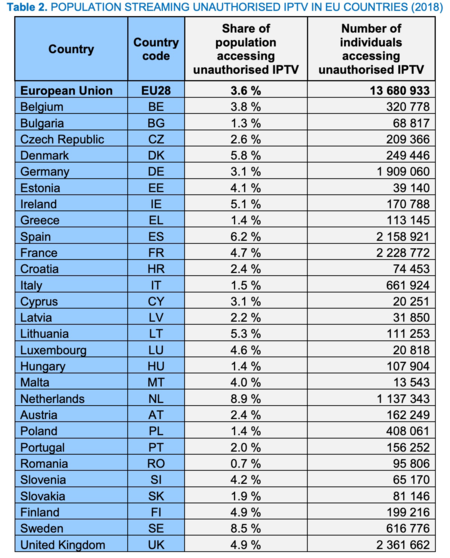 Spain, although it is not close to the 8.9 and 8.5% percentage of the Netherlands and Sweden, It is third with a 6.2% percentage of the population that accesses unauthorized IPTV broadcasts. The number is equivalent to 2,158,921 people. This supposes, according to the report of the Intellectual Property Office of the European Union, an average monthly cost of 3.59 euros. 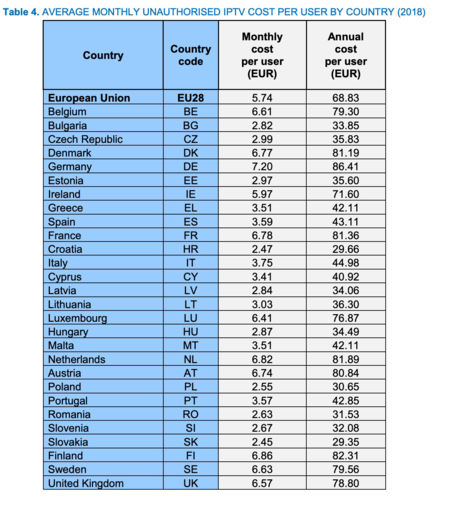 The analysis also goes into the ways users have to access this content and presents it in a graph "the key components of the technical infrastructure" to make these IPTV broadcasts possible.

"End users have a wide variety of technology options to view content. These options vary in price and reliability and are dependent on the customer's technical skills and knowledge, user comfort and experience, as well as hardware equipment. Bearing in mind that the end user most likely has a medium-quality smartphone, they can directly access the content by downloading and installing a streaming application. " 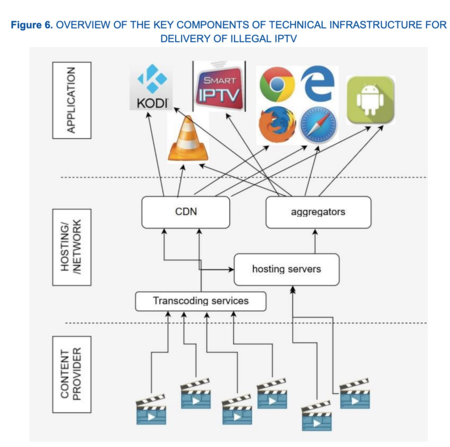 "Overview of the key components of the technical infrastructure for the provision of illegal IPTV". / EUIPO

The most popular applications that can also work on a PC, the study cites, they are Kodi, Mobdro, Terrarium, Popcorn time, SPMC, Plex and Vavoo, and explains that there are both browser add-ons that allow direct access to sites dedicated to unauthorized IPTV and applications for the same purpose in the iOS and Android stores. To telephones and equipment is added what the ISD or Illicit Streaming DevicesSet-top box-type devices that include pre-installed applications that make IPTV broadcasting possible, such as the aforementioned Kodi.

In addition, they add, "some applications that have been withdrawn for their infringing nature or that are not hosted in the application store in the first place, are available as APK to be downloaded by third parties." This makes Android, they say, "is a more popular option for accessing audiovisual content, but it also increases the risks of infecting devices with malware".