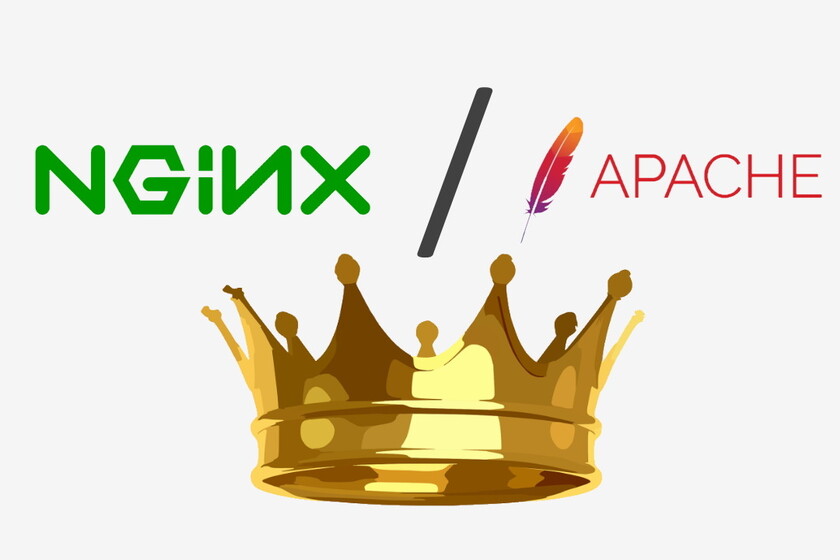 One of the types of software that Internet users use most often are web servers., although we are not aware of it: it is that application that, every time we connect to a website, is in charge of managing the data requests of our browser, of generating and / or loading the page code to each one of the users connected at any time, etc.

According to W3Techs, one of the companies that regularly publishes statistics on the popularity of each of the web servers available on the market, Until last month, the most used software in this field was the Apache HTTP Server (better known as 'Apache', simply).

It has been occupying that position since the prehistory of the Internet, in April 1996. (that is, exactly a quarter of a century ago). Thanks to its power and flexibility, it rose to that position in the ranking only a few months after Robert McCool created it in 1995.

Nginx, his main rivalIt wasn't created until 2002, by Igor Sysoev (and actually waited another two years for the public release). Its objective was to respond to the 'C10K Problem', related to the difficulties of pre-existing web servers to cope with a high number of concurrent connections.

Its lightness, scalability and its asynchronous approach based on events (and not on processes, like Apache) ended up guaranteeing a niche in the server market ... although his rise to the leadership has been much slower than that of his rival.

Thus, in 2009, the market share of Nginx was only 3.7%, compared to 73% of Apache (and the runner-up position for Microsoft-IIS, with 20%). Last year, the difference between Nginx and Apache had narrowed to merely 6.6%.

The 'sorpasso' is consumed

But now, according to W3Techs, finally Nginx has risen to the first place, in a much more atomized context than a few years ago: it was enough for it to gain a little more than a third of the market (33.8%).

However, if we group both Nginx and its derivatives (remember that we are talking about free software), we would also have to include the third party in contention (Cloudflare Server), as well as two other servers from the top 15: Tengine and ArvanNginx. So that, If we combine all these Nginx-based technologies, the figure rises to an impressive 52.4% From the market. 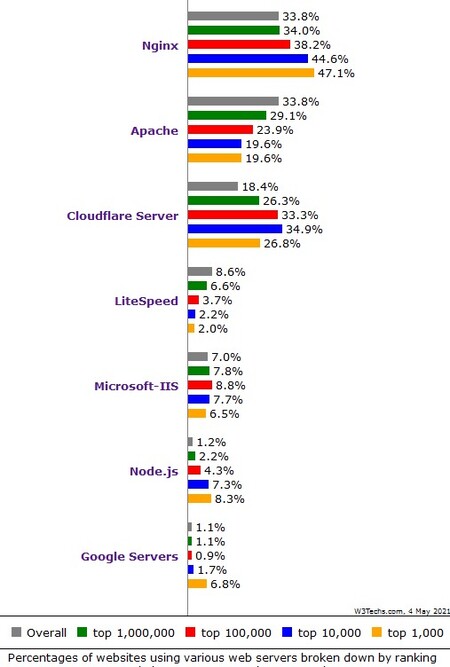 Nginx's market share (excluding its derivatives) also grows if we only focus on the top 1000 most visited websites of the Internet: in that field, Nginx has been leading since 2013, and is currently used by 47.1% of these websites.

Its adoption also varies if we take into account geographical criteria: although Apache continues to lead in the West and Japan, Nginx is the leading web server in China and has a near-monopoly in its home market (Russia). One of the reasons for its progressive growth in the West lies in the popularity of its combined use - as a front-end server - with NodeJS.