Learn to program collaboratively with Git by playing 'Oh My Git!', A free video game to which you can contribute yourself 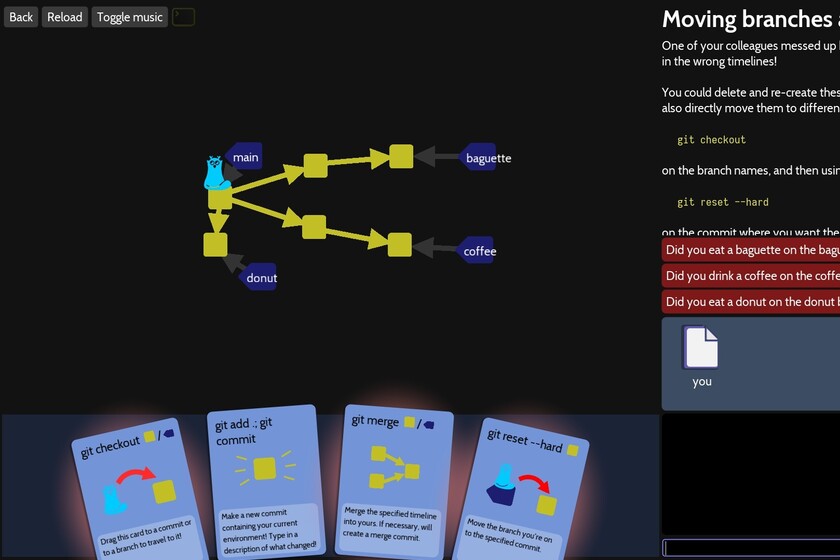 Git was created in 2005 by Linus Torvalds himself (the creator of Linux) as a tool to facilitate collaborative development of software. Since then, popular platforms have emerged, such as GitHub or GitLab, which allow its use online.

The problem is that it is a tool that may not be intuitive enough at first for the inexperienced user. Therefore, a couple of developers have proposed to help class of users to understand how it works ... through a video game.

And the result has been Oh My Git!, a project funded by the Prototype Fund, a program of the German Ministry of Education to promote open source development.

What does the game offer us?

Aimed at total beginners (although, yes, we can 'skip' levels freely if we already have previous knowledge), Oh My Git! gradually and interactively introduces the operation of the main Git commands (clone, commit, push, pull, branch, merge ...), seeking to cover the essentials to start using it in our projects.

The game gives us the option to carry out the tasks that it entrusts to us through two systems that we can alternate: the use of playing cards that we will have to drag to the main area of ​​the screen (the letters show not only the name of the command, but a description of it and an explanatory icon), designed for the little ones and those most prone to visual learning...

...or via command line (equipped with all the functions of the real Git), as seen in the following image: 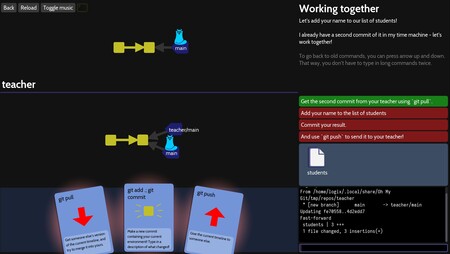 The main attraction of the game is that it allows you to clearly visualize what each Git command translates into when the user executes them, allowing to understand both the structure of the repositories and the sequence of events in real time, and how they affect the dummy file we are working with. What's more, Oh My Git! it affects to show us what happens when we work remotely with several repositories.

Since the open source game itself is hosted on GitHub, we have the option to clone it and create our own levels (currently has 44), following these instructions. To do this we must clone the official repository (where each file in the 'levels' folder is a different level) and have the free Godot game engine installed on our computer.

But, if all you are interested in is playing it to learn how to use Git, you should know that both the code and binaries for Windows, Mac and Linux are available for download on GitHub and Itch.io.