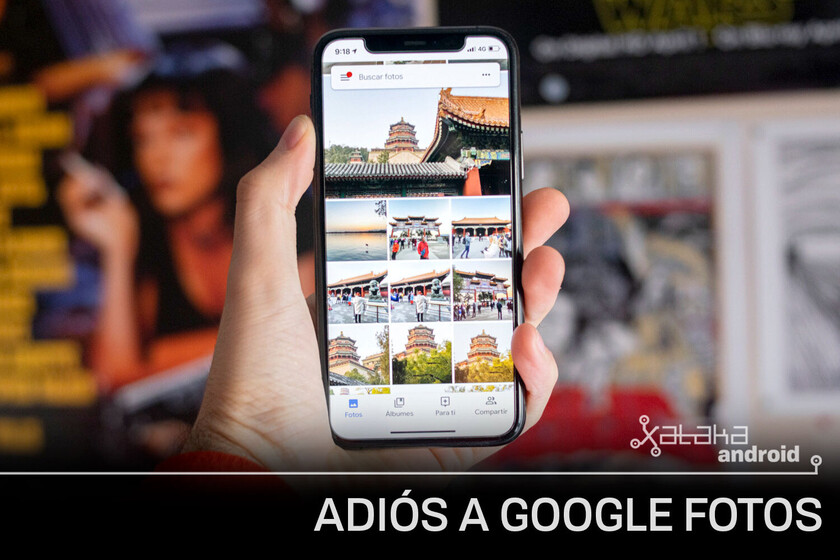 The countdown is running out. There is exactly one month left until Google Photos goes from offering free unlimited storage to being a paid service and I don't know what to do with my life. Literally. At the time of this writing I have 138,587 photos and videos stored. The first dates from December 2000, 20 years of memories, which is said soon. But if I tell you the truth, I have as many photos as I am lazy to move them to another service, and let's not talk about buying a NAS and building my own cloud.

Google played us when it announced that Google Photos was going to be paid and those of us, like me, who have stored our entire lives in its service faced the crossroads: Do we pay or do we look for alternatives? I have been thinking for months what will be the destination of my photos from June 1 and as the date approaches I see it more clearly: I will end up paying.


Google, this is not done

I don't think anyone is happy with Google Photos becoming paid. What Google has done is promise a service for life, let us fill it with our memories and then take it away from us. A full-blown low blow.

Apparently, they did not fully plan for people to use a free, unlimited service en masse, which also comes pre-installed on all Android phones. You couldn't tell.

In their statement, they assured that 28,000 million photos and videos are uploaded per week and that "in order to welcome more memories and build Google Photos for the future, we are changing our policy of unlimited high-quality storage." Apparently, they did not fully plan for people to use a free, unlimited service en masse, which also comes pre-installed on all Android phones. You couldn't tell.

We can regret everything we want (I have done it and I continue to do it), but the reality is that in a month Google closes the tap and that neither I nor anyone else is going to change it. And now that?

As I said at the beginning, since that fateful announcement I have been wondering what I am going to do as of June 1. One thing is clear to me and that is I will not save the photos that I have uploaded to physical discs. I remember with horror the endless lists of folders and subfolders in which it was impossible to find anything. I don't even want to know how many hours I will have spent organizing photos. Now what I want is to forget about all that and have them do it for me, something that I had achieved with Google Photos.

The only alternative of unlimited and free storage is given by Amazon. The problem is that it only works with photos, with videos only up to 5 GB, and I shoot quite a lot of videos. The videos do not worry me so much as neither the search engine nor the app are not as powerful as the ones we have in Google. It is not (only) a question of money, it is a question of functionalities and with Amazon it would be taking a step back.

Mounting a network storage is one of the alternatives that seduces me the most (or rather, it seduced me). Yes, they are physical disks, but there are manufacturers like Synology that offer their own image organization software with face tagging and much more, so this idea started to take center stage in my mind. Problem: it is not cheap. The model that has been recommended to me the most is the Synology DS220 + and it costs 362 euros to which we must add what the hard drives cost. For example, this 4 TB Seagate goes up to 175 euros and you would have to buy two. The total goes to more than 700 euros. Yes, I know that I would end up amortizing them, but they are still 700 euros to avoid paying a much lower amount if I decide to stay on Google.

Then there is the matter of downloading all the photos and videos and uploading them to the NAS. Here I have to make a clarification, and that is that although I have everything uploaded to Google Photos, I also keep the originals of many of my photos on physical discs (yes, those that I have so much hobby for). On the discs I have photos shot with SLR, most of them in RAW, of trips and photographic projects that I want to have in original. I count this because the process It would not be as simple as downloading from here and uploading there, but you would have to combine everything. You can call me lazy and disaster and surely you are right, but really I can think of few things that make me lazier than this. I do not know how much all the content I have in Google Photos weighs, but on the disks I have about 800 GB. It was not going to be a quick process.

Going to another service like OneDrive or Dropbox I don't even think about it. You would lose the potential of Google Photos and keep paying. If I'm going to stay in the cloud, that's why I stay in Google's. And here we get to the point where the idea of ​​paying starts to sound good.

What if I stay?

Currently I have contracted the Google One 200GB plan for 29.99 euros a year, but clearly this would fall short (in fact, I already have it at 82% capacity). The best option would be to contract the 2 TB plan, with which you would pay 99.99 euros per year. This are 8.33 euros per month, more or less triple what I am currently paying, but it is not 700 euros. It would be nice if Google offered some intermediate plan, but there is not; or 200GB or 2TB, period.

If I think about the long term there is a problem and it is that those 2 TB are not infinite. If I keep storing photos (which I obviously will), I may need 10 TB one day and that is already going to 50 euros per month. How long will it take to fill up? It is assumed that with this tool you can know it, but in my case Google says that it cannot calculate it. 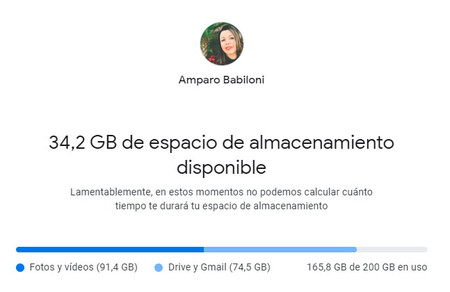 Neither solution is ideal. Ideally, Google would deliver on what it promised in 2015 when it launched the service, but that's not going to happen so here I am, not sure what to do.

Neither solution is ideal. Ideally, Google would deliver on what it promised in 2015 when it launched the service, but that's not going to happen so here I am, not sure what to do. What I do know is that every time I go to Google Photos to search for something and find it the first time I feel a pang in my heart. The service works so exaggeratedly well and I've gotten used to it so much that changing, wherever it may be, feels like a mountain.

The answer that a move like this deserves is that we all leave and Google Photos ends up being the desert that in its day was Google+, but let's face it, although there is an exodus of users, many will stay, and I may be one of them. What are you going to do on June 1?