Download free to print these spectacular maps of Madrid, Barcelona, ​​Valencia or Malaga and even make the one of your city 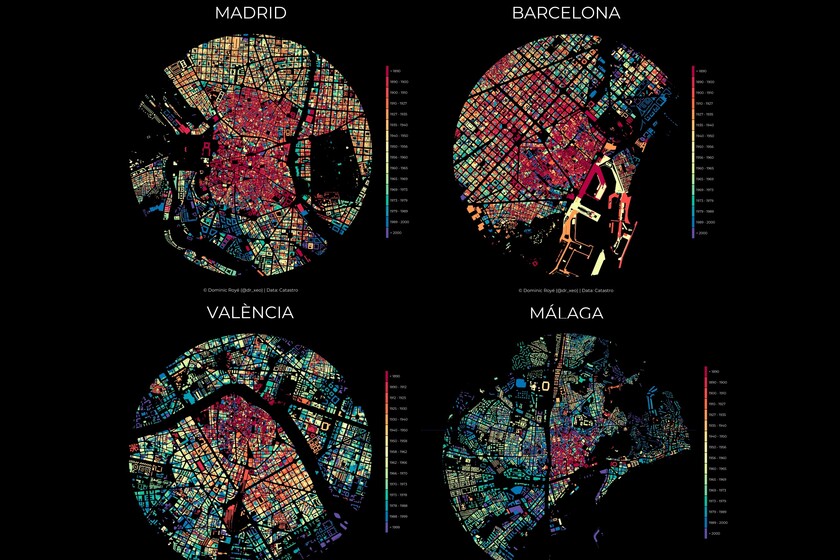 Dominic Royé He is a researcher in the Department of Geography at the University of Santiago de Compostela and, as we will see, an expert in data visualization. In 2019 he explained how to represent the historical growth of Spanish municipalities from the end of the 19th century to the present in a very graphic way, as we see in the image above.

Thanks to the fact that, as Royé points out, the "General Directorate of the Cadastre of Spain has spatial information on the entire building except for the Basque Country and Navarra", it is possible to use the statistical software (and programming language) R to create the map from our own locality. It is not a process for everyone, but it is not impossible either.

That the data are better or worse, in the sense of being adjusted to reality, It does not depend on the tool and its creator, but on the information contained in the Cadastre. Some people point out on Twitter that, because of how some buildings have been represented, some dates correspond more to renovations than to the original construction date. This is the case, for example, of the Mestalla stadium in Valencia, which was built in 1923, but is marked in yellow, like two decades later.

Free download to print those of Madrid, Barcelona, ​​Valencia and Malaga 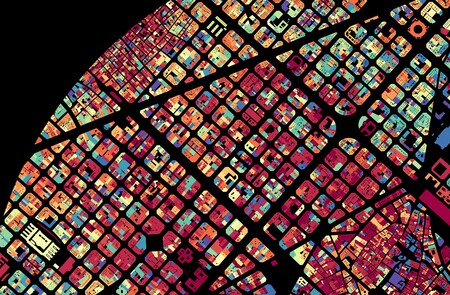 That's how good the beautiful expansion of Barcelona looks.

If as a server you are not from Barcelona but admire the beauty of its urban map (or that of Madrid, Valencia or Malaga), Dominic Royé has made available to anyone who wants to download them, and free of charge, the four maps highlighted in the main image of the article . In particular, I think they are great for printing and framing.

The unexpected success of the 🗺️ map of Valencia with many requests from all of you has led me to offer you a pdf format of Valencia, Barcelona, ​​Madrid and Malaga. Thank you all! 🤩 pic.twitter.com/IetioLkUVj

Royé hung up the map of Valencia days ago with such success that he has decided share those four maps in PDFs vector, so the quality couldn't be better for making large prints. These are the download links provided by the researcher:

Royé previously demonstrated that with the data from the cadastre it is also possible to make other maps, such as this one of height in Ourense. Everything is a matter of cheering up.

The pattern of the heights in #Ourense. The tallest building is 76 m. #dataviz #rstats pic.twitter.com/sYrsHwO1my