CodeGym, a platform to learn to program with Java from scratch thanks to gamification 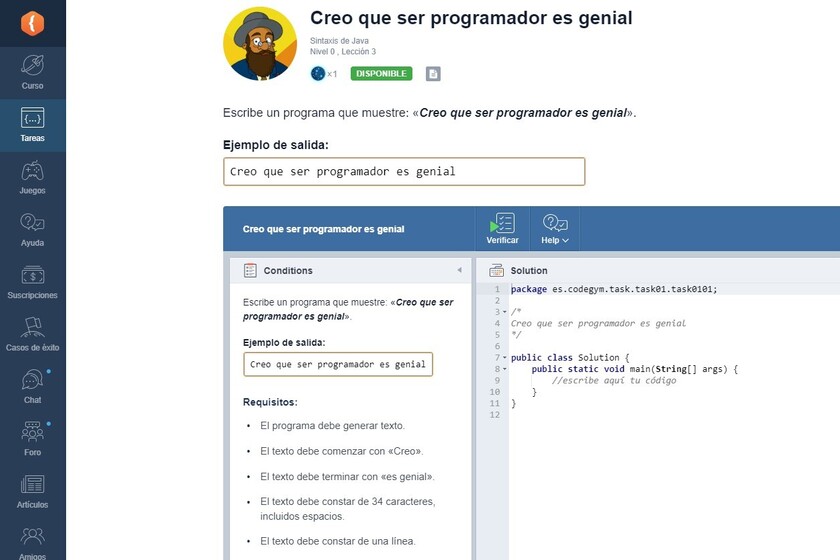 "What if we created a course that teach people to learn to program with Java in the same way that a tutor does, but online? "That was the question asked in 2012 by the creators of CodeGym.

His proposal was so successful among Eastern European countries (it has a large community of users in this region of the world) that in 2018 they decided to launch a global version in English. And now They also have versions in a total of 17 languages, including Spanish.

What does CodeGym offer us?

The objective of this freemium platform is to help the user to learn Java from scratch, either from the PC or from the mobile, turning to a futuristic video game format, in which each 'mission' includes a series of levels composed of progressively more complex exercises, until adding 1200 tasks and 600 mini-conferences, focused on specific topics to avoid boring with too theoretical content.

The plot of the game centers on a spaceship that is stranded on an unknown planet, forcing the crew to reprogram the thousands of 'wild robots' that inhabit itn to be able to repair it.

"Have you ever played something where your character can level up? Sometimes it hooks you without realizing it, right? You know what I mean? In CodeGym you have to get that your character goes up from level 1 to 40 (80 when we launch the continuation). Take the whole course and you will be a crack programming in Java. "

"If you reach level 40 you can look for a job as a junior developer in this language. There are even those who have been able to find work just by reaching level 20, since CodeGym contains many exercises. Seriously, it has a lot. "

The best thing is that all these exercises we can program them, correct them and 'run' them from an IDE integrated into the platform itself (both in its Android version and on the web), which saves inexperienced users from having to start their learning by installing an external IDE or a code editor.

Throughout all these missions, and with the excuse of robots and space travel, students are learning not only the syntax of Java (it begins, as is usual in these cases, explaining basic concepts such as variables, classes and methods) , but also other aspects of the language such as multithreading, collections, use of SQL, JSP, etc.

But video games are not only the format on which the course is based: some of the missions consist precisely of create duplicates in Java of famous games like the 2048, the Snake or the Minesweeper.