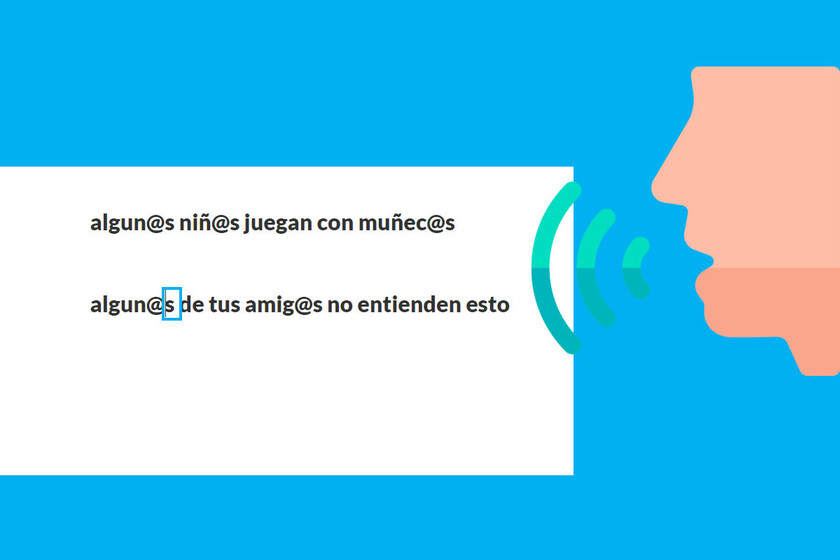 If you are a person who does not have any visual impairment and who can perfectly read the text you see on a screen, perhaps you have never thought about how people who do have these limitations perceive the content, and who often depend on the accessibility features in the different systems.

In Windows there are tools such as Storyteller, or in iOS for example, there is the function Voiceover. What they both do is basically that, read text on the screen aloud, and over the years they've gotten pretty good at it, except when they have to deal with simply unpronounceable things.

Please don't use the @ for inclusive language

The conversation about the different gender biases in language is one that takes a long time, but here we want to talk specifically the use of the @ to try to write in a neutral way without assigning a gender to some words.

It is something relatively common, although more and more we see that options such as "x" or "e" are used to avoid assigning gender in search of that inclusiveness in language. Yes OK in the cases of "e" or "x" a word is still produced that can be spoken by a screen reader by voice and understood by a human (sometimes), what happens with the @ is different.

The @ is not a letter, it is a symbol that does not really have a phonetic transcription, and what a voice screen reader will do when it finds you is read your full name "at", as you would read a comma or an exclamation point. How would you read it out loud yourself if you don't decide to replace it with an "a" or an "o", which is literally what you don't want to do because of its use as "inclusive".

This is how when writing something like "friends", for example, this ends up being read by the Narrator or VoiceOver as "friend that" and the faster the narrator goes or the longer the sentence, the more incompressible it will be.

Every time we use the @ wanting to be inclusive, we stop being inclusive with people who use devices with voice screen readers.#accessibility pic.twitter.com/50yDN2L3DB

Quoting the people of Internet Molaba, the moral is that by using the @ wanting to be inclusive, we stop being inclusive with other people who depend on these accessibility tools. No one with visual limitations who depends on one of these tools will understand your message if you write it like this.

And the solution is very simple when using options like "e" do not represent the same problem, and their use is becoming a little more accepted among people, although RAE continue without seeming necessary.