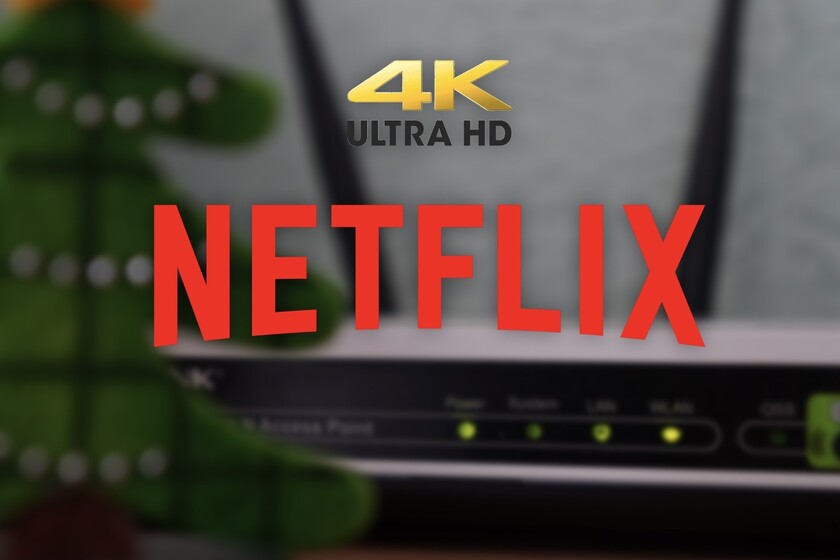 One of the keys to Netflix for a long time has been the different broadcast qualities: the service plays videos in SD, HD and 4K quality as long as the content is available at that definition. But now well: Can we reproduce those qualities with the Internet connections we have at home?

The answer is yes, but it depends. Let's start with the official figures that Netflix itself gives us about the recommended bandwidths:

Let's avoid confusion: we are talking about Megabits per second (Mbps), which is how the bitrate or bit rate and network connections are measured, instead of megabytes per second (MB / s). Therefore, with the vast majority of connections we will have enough to enjoy Netflix. But be careful, because you have to take into account several factors. And the most important of them is the speed variation of some connections.

In Spain, when you hire an ADSL line, you will most likely get a speed of "up to 20 Mbps". Depending on where the central station is or if you have a repeater nearby, that can be 17-18 Megabits per second (consider yourself lucky) or even less than 3 Mbps.

Therefore, the best thing you can do if you have an ADSL and are considering hiring Netflix is do a speed test to be able to check how fast you get home, knowing that many times, in addition to a bad connection, the bad thing is the router and it may be worth changing.

ADSL tends to disappear, but wherever it is, it makes things difficult for Netflix and especially Disney + and Apple TV +

If you live in a minimally large urban core, you most likely already have fiber. But if not, the usual thing is that you can play content in HD (at least 720p) without too many problems since ADSL usually exceed the 5 Megabits per second that Netflix recommends. But be careful, because that can go wrong to the minimum that someone at home does something as simple as uploading a YouTube video to a device.

Unfortunately, lockdown was the perfect time to see that with 7.62 Mbps, 2160p / 4K video can be seen on Netflix. The recommended 25 Mbps is for the highest quality.

ADSL lines are not the most stable thing in the world, and the classic situation of "nobody do anything on the internet I want to see this movie on Netflix"Of course, although Netflix speaks of 25 Mbps, according to our own measurements, the normal thing is that the average bitrate is about 15 Mbps in 4K, so a slightly higher speed could be enough, although with buffering depending on the case.

These are situations that in 2021 it is hard to believe that they will continue to exist, but although in recent years the total number of lines has fallen by about 3.15 million in favor of fiber, the data says that there are still approximately 1.77 million ADSL lines in Spain.

Fiber: plenty, but for 4K take into account the strength and signal of the WiFi

Naturally, if you have a fiber optic connection at home, you don't have to worry. The speeds that are contracted with this modality today do not drop in almost any case than 100 Mbps, four times what we need to play video in 4K. Now, could you have a "bottleneck" depending on the WiFi coverage you have in the house.

If you get 100 Mbps, but you have a large house, not wired, with an operator router, and you do not have a Mesh network or good repeaters, it is possible that the 25 Mbps that Netflix recommends will not reach you, as in fact it happens to the server with a Fire TV Stick 4K in the bedroom.

Anyway, there goes a reassuring message: It is often believed that large connections are needed to be able to play HD videos when it is not like that. A 720p video, which is the "minimum bar" that many people set, needs less than 5 Mbps, taking into account the bitrates that are seen with that content. And that, provided certain precautions are taken, are covered by most of the ADSL in the country.