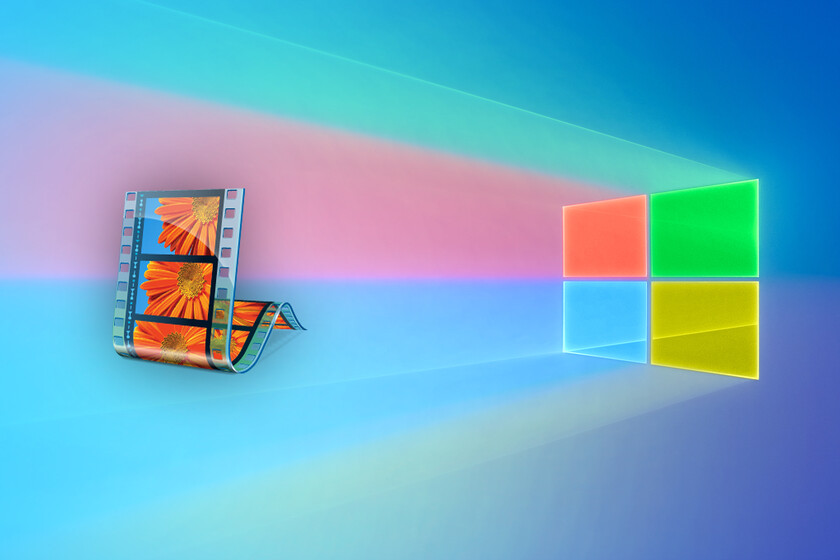 In January 2017, Microsoft announced that it stopped supporting Windows Movie Maker, the iconic simple video editor that had not been updated since 2012. Once one of the great integrated tools in Windows XP, and the star of the Windows Live Essentials pack, said goodbye like this after five agonizing years.

Windows 10 never included it as standard, but Microsoft allowed downloading and installing it from their servers, until he left decided to give her a silent goodbye. Everything seemed headed for Redmond to develop a true and worthy successor to Movie Maker, as Windows Central said in 2016.

However, four years and three months later, and almost six years after Windows 10, that has not happened and the user who wants to edit a video from the system in a basic way, but in the way he did before, can no longer. Yes, you can download Windows Movie Maker and install it, as we tell you here.

Windows Movie Maker has an unknown "successor" in Windows 10 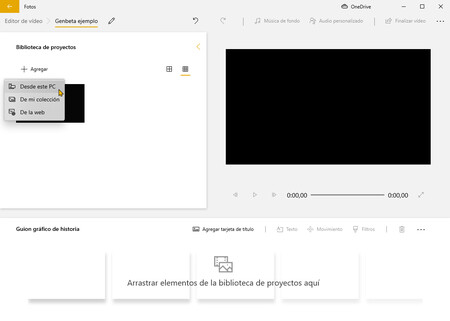 As we have made more and better videos thanks to smartphones, it would make sense that the pre-installed or built-in tools for editing them on operating systems would have improved accordingly. This has been the case on Android, with Google Photos, or on iOS, with Photos and iMovie. However, both in macOS, where iMovie was losing functions, and in Windows 10, where we are going to see how much more has been lost, users are more orphaned of improvements.

In 2017, saying goodbye, Windows Movie Maker felt like an outdated video editing app because, beyond not having been updated in five years, it still had the old aesthetic. However, It is the tool that many users began to use years and years before, and it was still being installed. Today the system offers such a poor (and unknown) alternative with Photos / Video Editor, that let's see what happened to the Movie Maker searches during April 2020, in full confinement: 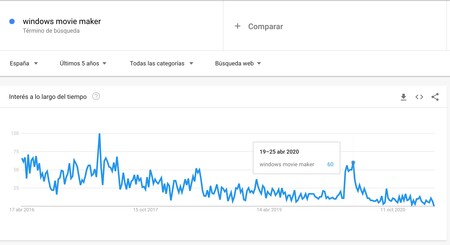 Having eliminated the official Windows Movie Maker downloads, when a lot of home video editing had to be done (compilation videos of birthday greetings from people who were locked up at home, server sent like four), people wanted to turn to Movie Maker as a safe bet. Because the Windows 10 Video Editor, integrated in Photos, is as unknown as it is incomplete, no matter how much Microsoft recommends it like this:

"Windows 10 includes the video editor, a complete set of video creation and editing tools that tell the story with music, text, motion, and 3D effects. The video editor is the successor of Movie Maker in Windows 10, with a focus on easy-to-use creative tools that allow you to tell your story. "

Video Editor (Photos) is far from what Windows Movie Maker was 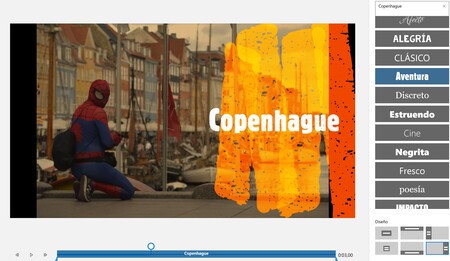 The possibilities of Photos / Video Editor in Windows 10 are negligible when pretending to do the same as in Movie Maker. Modernity, yes, but predetermined.

Knowing that Microsoft proposed Photos / Video Editor as an alternative, I suggested to my partner that he use it when he asked me how he could install Windows Movie Maker, of which she was "advanced user". And my recommendation couldn't be worse. From the first moment, she felt not only uncomfortable, as is normal when changing the tool with which you have worked for years and years, but also orphaned of functions and surrounded by limitations.

Quickly saw that text editing in Photos and Video Editor is extremely limited, both in terms of availability of sources and flexibility. There is a default font list, which cannot be exited. With them you cannot change the style, or place text by eliminating the style of the templates that are integrated.

Windows 10 Video Editor has embraced the age of filters and quick editing very well, but has forgotten about almost everything else.

It is simply that, have made customization very limited, embracing the era of templates without allowing to change anything. And you feel limited. The "adventure" style, for example, is orange, and it does not allow to change color, which would come in handy to fit better with colored backgrounds that match more.

The only thing that can be changed in text is the location in the "Design" section., but with default locations. Also the style, but when you touch the "Motion", the only thing you alter are the animations of the background images, not text transitions. In that sense, you can choose the time of each image in the video, but not the time of the text accompanying that image. 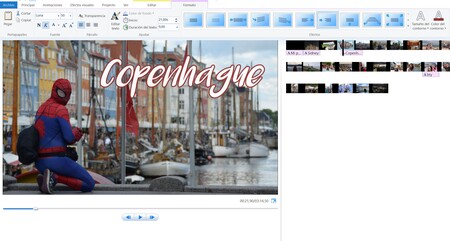 You only have to look at this image of Movie Maker to see all the flexibility it provided despite its basic editor limitations.

In contrast to all this, Movie Maker feels much more flexible and less "Instagram" in the sense of not being so based on default modifications. In the text, you can use the system fonts, change size, choose the exact place where you want the text, etc. Everything is less aesthetic and modern than the Photo / Video Editor templates, but you choose the aesthetic and the possibilities of changing to bold, italic, color of the contours, etc. are appreciated.

What's more, entering text with a certain style, we could copy it to another slide, so that it is easy to maintain homogeneity between photos and text. In addition, you can choose the animation of the photo independently of the type of text input in the image. 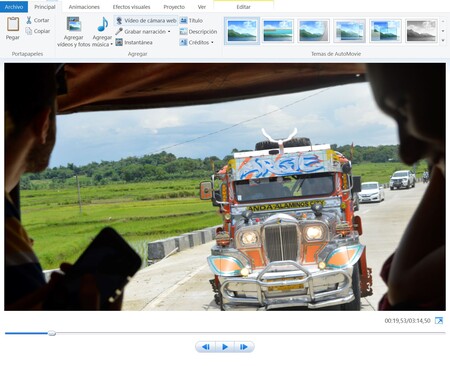 Recording narration in Windows Movie Maker was convenient and did not require exiting the application.

Regarding other functions, to give more examples, in Movie Maker we can record audio narrate directly in the application, without having to use external audio, or take video from the webcam, which we have not seen possible in the new editor. 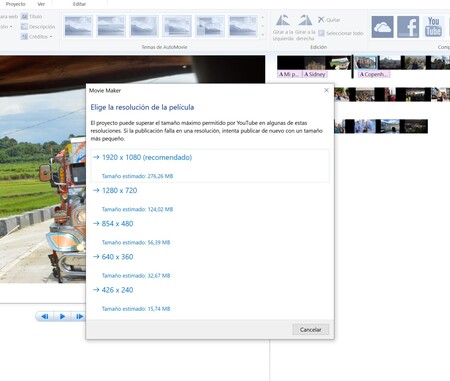 Also, in this age of social media, Video Editor on Windows does not allow sharing on platforms like YouTube, Vimeo, Facebook, etc, but only allows export. Again, in contrast, Movie Maker in 2012 could do all of that in addition to letting us select resolution to export locally.