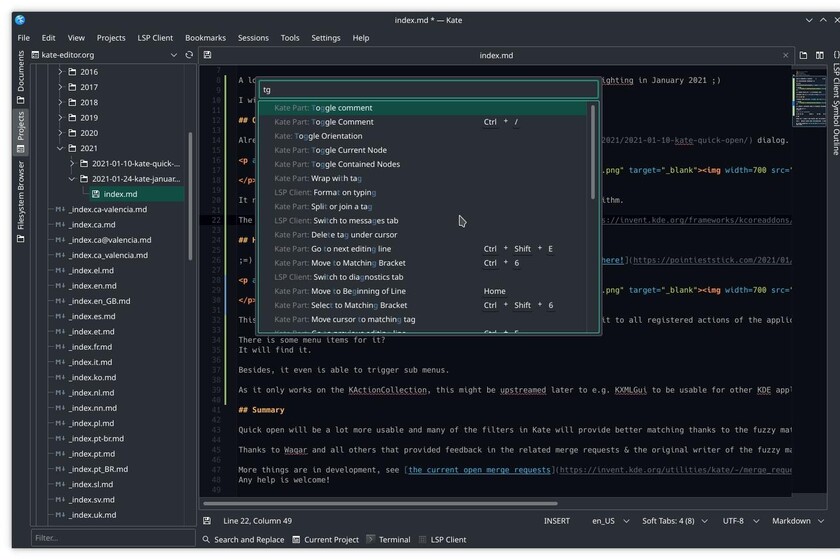 On December 14, the program Kate, the advanced text editor from KDE Plasma, I was turning 20 years old. Born as a multi-document version of KWrite (the old equivalent of Notepad in KDE) over time it has become a good option for developers more attached to the famous free desktop environment.

But, despite its virtues and multiple options, Kate does not seem to stand out from many other similar editors; And, on top of that, another program much less veteran (and with less 'open source' pedigree) has beaten it by the hand by focusing on the same market niche: MS Visual Studio Code.

However, facing the imminent release of its version 21.04, Kate's developers have proposed to provide their software with a set of new functionalities that allow it to be closer and closer to talk face to face with the microsof code editort (excluding for now, of course, the extensive library of extensions in this one).

Let's review some of these news:

Upload repositories from Git in the versions of Kate for Linux it is nothing new, but until now that had always Forced the user to enter text mode commands on the integrated terminal of the program. The Windows version of Kate, however, didn't even have this option.

From now on, let's use the operating system we use, we can make commits, merge branches or clone repositories from the program's own graphical interface, a much-needed new feature to make Kate easier to use and will no doubt be welcomed by thousands of developers who use the program.

One of the most used and best valued functions of Visual Studio Code is the Command Palette, a text box that allows full access to almost all the functionalities and commands of the code editor, substantially improving the workflow of its users.

Kate did not have a command palette, a neglect highly criticized for years by its own users ... and that will remain solved after the next update.

Kate's "Quick Open" function has allowed for years to display a list of open documents and projects, to quickly navigate between them. But, from now on, Kate will improve this feature by implementing 'fuzzy matching'.

This means that we write "kte", the quick opening will not only offer us an option like (for example)"ktexteditor.cpp"but below will also show"katemain.cpp", despite the fact that there is no literal coincidence with what is written by the user.

Let's add to that a very noticeable performance improvement of the code lookup function within each file (thanks to better use of multicore CPUs), as well as a favorable aesthetic change when displaying the results.

LSP stands for "Language Server Protocol", a protocol that allows the editor to recognize the programming language used in a certain buffer and adapt to it when, for example, recognizing errors in the code and proposing solutions to them.

It constitutes a fundamental element that separates the mere code editor from a lightweight development environment... and it is another of the novelties that Kate is about to introduce.

Kate 21.04 is scheduled for release in a few days: April 22, along with the rest of the project's applications until recently known as KDE Applications, renamed last month as KDE Gear, and which includes classics such as KDE, Kontact, Konsole or Dolphin.

Remember that it will be available for multiple operating systems and architectures (In fact, we can download Kate even from the Windows Store).