Brave and DuckDuckGo will block the use of FLoC in browsers 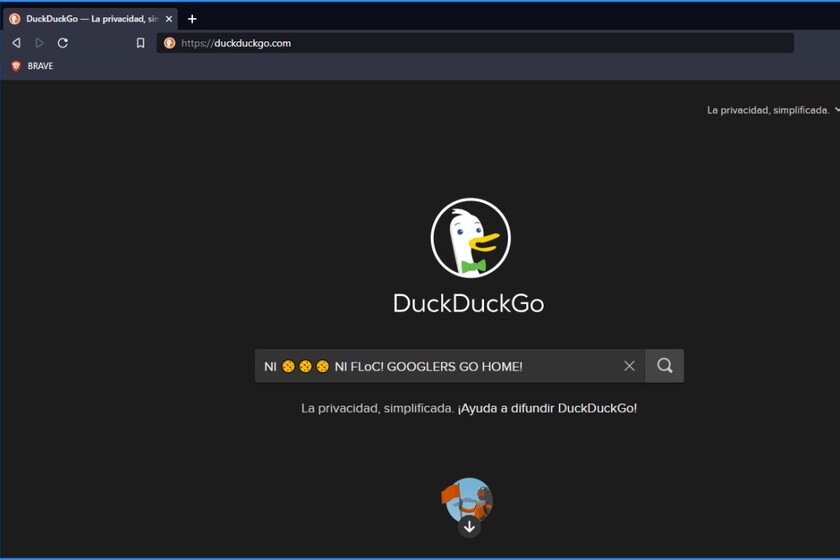 We have already spoken on other occasions about FLoC (Federated Learning Cohort), the innovative technology that Google is developing with the aim of replacing cookies as a system for monitoring the user's web activity, diluting it within demographic groups to safeguard their privacy.

Google is already testing FLoC in its Chrome browser, although not with all users, but only with 0.5% of them (in AmIFloCed, an online tool of the EFF, you can check if you are one of them). Its goal is to reach 100% of its users in the next two years.

Following that, Google announced that over time Chrome will end up blocking the use of third-party cookies by other companies (which, considering their share of the browser market, would undoubtedly mean the death of this technology).

Brave and DuckDuckGo lead the rebellion

However, FLoC is not without its problems: one of them is that it contributes to reinforce the centralization of the Internet around Google. The other, according to Brave and DuckDuckGo ... is that does not even meet its objective of safeguarding privacy. In the words of Peter Snyder and Brendan Eich of Brave,

"FLoC materially damages user privacy under the guise of being privacy-friendly. FLoC makes your browsing history known to websites, which makes it easier for sites to track you across the web, and promotes a false notion of what privacy is and why privacy is important. "

That is why, in an unprecedented reaction, Brave developers (a browser specifically focused on privacy) have decided to block FLoC in the trial versions of their application on desktop and Android; the change will come to stable releases later this week.

Another company that makes the flag of privacy on the Internet is the DuckDuckGo search engine, which also maintains an extension for browsers with which, likewise, from now on they will try to block FLoC.

The arguments of its CEO and founder, Gabriel Weinberg, are very similar to those put forward by Brave: "FLoC is simply not good for privacy." According to Weinberg, it's nonsense claim that "a behavior monitoring mechanism imposed without consent (that is, FLoC) can respect the privacy of individuals at the same time."

From Brave they affect this imposed nature of the FLoC: "Any new function that risks privacy on the web must be opt-in", that is, It must be the user who proactively and previously agrees to participate in it.

"One might wonder why Google is not implementing FLoC as an opt-in. We suspect that [...] Google knows that a privacy-damaging opt-in system would likely never reach the level of adoption necessary to induce advertisers to use it. "

According to the consumer organization Consumer Reports, "third-party cookies were an accidental web artifact that ended up being exploited in bad faith, for decades, to track users. Getting rid of them is good, but replacing them with technologies that end up, roughly, exercising the same unwanted follow-up will not solve the problem. "

From Google they explain that FLoC is just one of the elements of your Privacy Sandbox strategy, with which it aims to achieve a 'balance' between the privacy needs of users and the advertising of the industry. According to Marshall Vale, the product manager for said strategy,

"We concluded that blocking third-party cookies directly without viable alternatives for the ecosystem was irresponsible, and even detrimental, to the free and open web that we all enjoy."

Interestingly, one of the people involved in the design and implementation of Privacy Shield is the director of Privacy and Confidence of Google Advertising, David Temkin, who until January 2020 served as Brave's product manager. Just over a month ago, Temkin wrote a pro-privacy (and pro-FLoC, of ​​course) plea on Google's blog. It does not appear that he has been able to convince his former employers.

It could be argued that Google's main motivation for launching the Privacy Sandbox lies in the fact that all relevant browsers already include systems to block third-party cookies and that the decrease in these is a problem for companies (such as Google itself) whose business is based, above all, on personalized advertising.

But the problem goes further: if at some point third-party cookies end up being replaced by FLoC, Google will have in its hands a way to track consumers that is prohibited from other companies in the advertising sector, which could put you in a monopoly situation: no other company could charge advertisers so much, because the information they will handle will be less valuable.