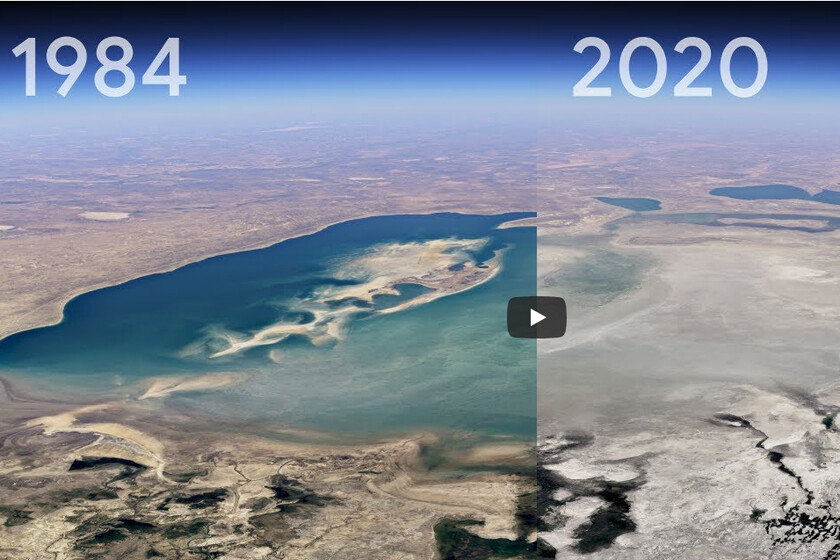 From time to time, Google Earth is updated to introduce new functions and improvements, such as distance measurement or tests to test your knowledge about the planet. Now, you just received its biggest update since 2017 to welcome 'Timelapse'.

With this new feature, which has been in testing for a long time, we can see how time has passed by places around the world and check what changes there have been at the planetary level in the last 37 years. Google assures that, for this, they have collected more than 24 million satellite images taken between 1984 and 2020, and have required more than 2 million hours of processing on thousands of machines.

The latest Google Earth update, the largest since 2017, allows us to see Earth in a whole new dimension: time. Responsible for this is the Timelapse function, thanks to which anyone can see how time has passed through places around the world and witness almost four decades of changes on a planetary level.

Google ensures that Google Earth Timelapse is the world's largest video about our planet and "it would not have been possible without NASA and the Landsat program of the United States Geological Survey, [...] and without the Copernicus program of the European Union with its Sentinel satellites. And it is that, to integrate the animated images of Timelapse in Google Earth, more than 24 million satellite images taken between 1984 and 2020 have been gathered.

In total, it took more than 2 million hours of processing on thousands of machines on Google Cloud, which managed to combine 20 petabytes of satellite imagery into a single 4.4 therapy pixel video mosaic (equivalent to 530,000 videos in 4K resolution). Also, for the next decade, Google Earth will be updated every year with new Timelapse images.

To use Timelapse in Google Earth, go to g.co/Timelapse and, using the search bar, you can choose anywhere on the planet wherever you want to see time "in motion". You can also open Google Earth and click the wheel to search for Timelapse on the Voyager story platform.

Also, Google uploaded more than 800 Timelapse videos in 2D and 3D for public use at g.co/TimelapseVideos. In this way, you can select any video you want as a ready-to-use MP4 video or just play the videos on YouTube.