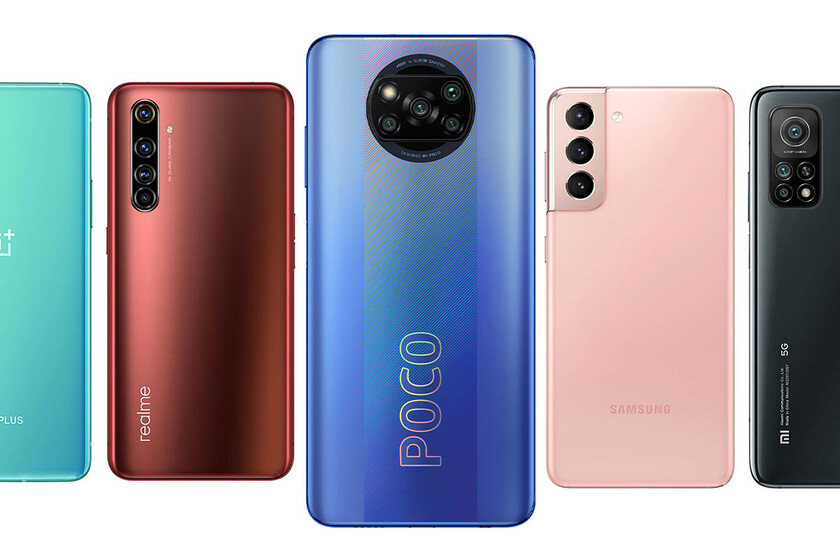 POCO, Xiaomi's friendly brand, renews its ranks with two new high-end terminals that follow in the wake of the original POCO F1. The POCO X3 Pro debuts the new Snapdragon 860, a high-end processor but with 4G connectivity. Of course, there is no lack of the screen with a higher refresh rate and the large battery with fast charging.

Comparisons are hateful, but also necessary, so we've faced the POCO X3 Pro vs. its competition in the high-end Android. Let's see what the POCO X3 Pro has and what it lacks when facing the Samsung Galaxy S21, Xiaomi Mi 10T, OnePlus 8T, Realme X50 Pro, OPPO Find X3 Neo and Sony Xperia 5 II.

One of the characteristics that best describe the POCO X3 Pro is its processor, since it is, today, the first and only mobile to incorporate the Snapdragon 860. It is a new Qualcomm processor with 7 nm manufacturing and eight cores at up to 2.92 GHz, which is something like a plus version of Snapdragon 855+.

The choice of this processor has two consequences in the POCO X3 Pro: one good and the other not so much. The good news is that it should allow the price of the terminal to be lowered compared to other mobiles that mount the Qualcomm 5G modem. The bad is that we are left with 4G connectivity, something quite unusual in these times. 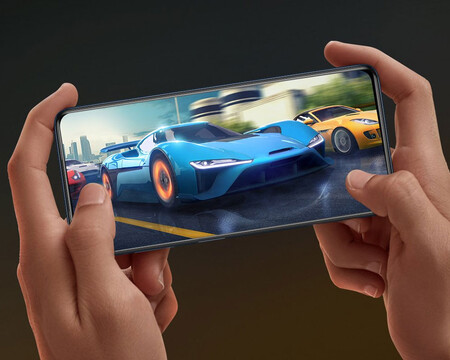 Of course, all the other mobiles in our comparison have 5G connectivity, either signed by the Snapdragon 865 or, in the case of the Samsung Galaxy S21, by the Exynos 2100. The POCO is the ugly duckling of connectivity, although here the factor that will make the difference will be the price.

In terms of memory and storage, the POCO X3 Pro is on the line with its 6 and 8 GB of RAM and 128 or 256 GB of storage. Now, it is true that the high-end is already turning more starting at 8 GB and reaching 12 GB of memory like those available in the OnePlus 8T, Realme X50 Pro or the OPPO Find X3 Neo.

For the screen, the POCO X3 Pro bets on a 6.67 inch LCD panel, which is exactly the same as the Xiaomi Mi 10T, if it weren't for the different refresh rate. It comes to be in the middle of what we find in the high range, although pulling to the top, as there is still room for relatively compact terminals such as the Samsung Galaxy S21 or the Sony Xperia 5 II, with 6.2 and 6 screens. , 1 inches respectively.

All the phones in our comparison left 60 Hz behind, so we have mainly two sides: those with a 90 Hz screen such as the Realme X50 Pro or the OPPO Find X3 Neo or those that have it at 120 Hz, which are the rest, including the POCO X3 Pro. The exception is the Xiaomi Mi 10T that raises the ante slightly so that it reaches 144 Hz.

Regarding notch or perforations, 2021 is confirmed as the year of the piercing on the screen: the favorite solution to incorporate the front camera of the POCO X3 Pro and basically all the competition except Sony, which in the Sony Xperia 5 II includes it in the upper frame as usual.

Cameras without much fanfare

The POCO X3 Pro includes what would be called a basic lens package for a high-end (or even mid-range) in this 2021: it has a 48-megapixel main lens, an 8-megapixel wide-angle and two extra 2-megapixel sensors for bokeh and macro. It is similar to the offer of the OnePlus 8T or the Xiaomi Mi 10T, although on paper it should be less versatile than those present in the Galaxy S21, Realme X50 Pro or OPPO Find X3 Neo.

At the front, the POCO X3 Pro mounts a 20 megapixel front camera perforated centered on the screen and located more or less in the middle point. It is identical to that of the Xiaomi Mi 10T, superior to the one mounted by Sony, Samsung and Realme, although lower in resolution than the 32 megapixels that the OPPO sensor has or the 32 + 8 MP of the Realme X50 Pro. 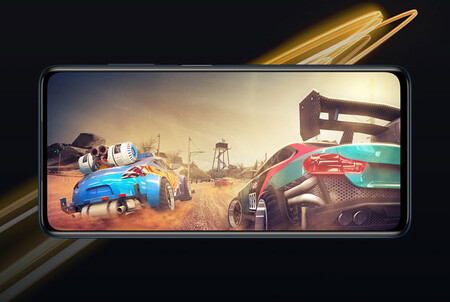 Over time, Xiaomi has published a handful of terminals under the POCO brand and, if something is agreed, it is to include a large battery that rarely falls below 5,000 mAh capacity. You will find a little more in the POCO X3 Pro, which incorporates 5,160 mAh. Is the largest battery of all the phones in the comparison, closely followed by the Xiaomi Mi 10T and its 5,000 mAh and, at a further distance, by the 4,500 mAh that mount the OnePlus 8T and the OPPO Find X3 Neo.

The POCO X3 Pro accompanies its large battery with a 33W fast charge which, again, coincides with the figure of the Xiaomi Mi 10T and is higher than Sony's 21W or Samsung's 25W (although they are accompanied by wireless charging). However, the trio of BBK Electronics mobiles (OnePlus 8T, Realme X50 Pro and OPPO Find X3 Neo) double the figure, reaching a load of 65W.

As always, we leave you with the complete comparison table with all specifications of the terminals in our comparison, so that you can at a glance see what the POCO X3 Pro has and what it lacks compared to its competition.