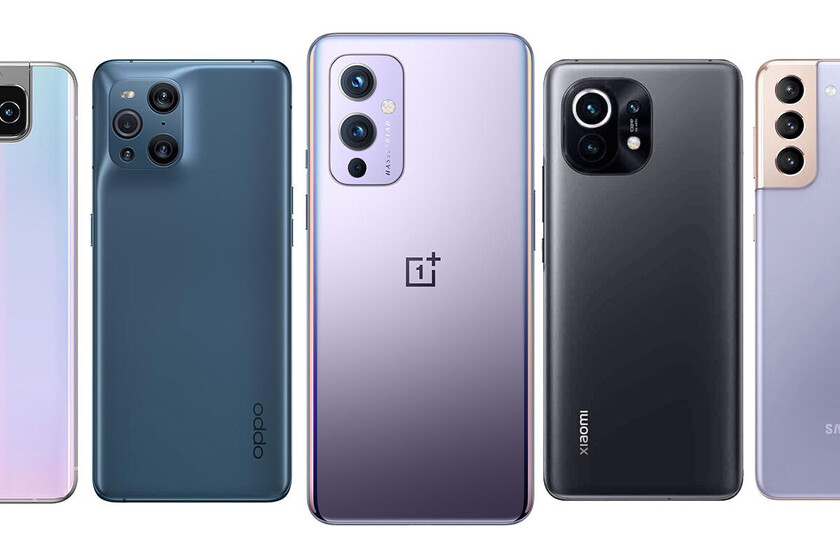 The new high-end OnePlus are official and, again, they are a couple again. The OnePlus 9 and OnePlus 9 Pro with Snapdragon 888, 120 Hz displays and cameras developed in collaboration with Hasselbad.

To see how the new OnePlus fare against its direct competition, we have them face to face with the latest high-end mobiles in the definitive comparison. This is how the OnePlus 9 and OnePlus 9 Pro stand in front of the POCO F3, Xiaomi Mi 11, Samsung Galaxy S21 +, OPPO Find X3 Pro, Realme X50 Pro 5G, ASUS Zenfone 7 Pro, Sony Xperia 1 II and Huawei Mate 40 Pro +.


QHD + resolution only for a few

If a few years ago that a terminal raised the refresh rate to 120 Hz was considered a feat, today rare is the high-end mobile that maintains 60 Hz lifelong. Of all the mobiles in our comparison, the Sony Xperia 1 II is the only one that does not raise the refreshment of the screen.

Almost the entire high-end has 120 Hz AMOLED displays, but only a few with QHD + resolution

The 120 Hz refreshment like those present in the OnePlus 9 and OnePlus 9 Pro, the same that you will find in most of the high-end except in the Realme X50 Pro, Zenfone 7 Pro and Huawei P40 Pro +, which have a 90 Hz refresh rate. Of course, the OnePlus 9 do not touch the speed of touch response, something that it does happen on the Xiaomi Mi 11 (480 Hz) and Zenfone 7 Pro (200 Hz).

The OnePlus 9 have AMOLED, which is how little all the phones in the comparison agree on. At 6.55 inches for the standard model and 6.7 inches for the Pro model, the diagonal is average. Where there is more difference is in the resolution of the screen, which hits QHD + on the OnePlus 9 Pro. For now, only a handful of mobiles bet on this resolution, and Full HD + is still the favorite of the high-end.

Snapdragon of all flavors

A few years ago, it was almost unnecessary to compare the processors of high-end mobiles, since basically they all had the same: Samsung mobiles the most powerful of Exynos, Huawei and Honor mobiles the most cutting-edge Kirin and the rest the high-end Snapdragon for that year. In 2021, we have almost unanimously from Snapdragon, although not of the same model.

Excluding the exceptions of the Samsung Galaxy S21 + with Exynos 2100 and the Huawei Mate 40 Pro + with Kirin 9000, everyone else has a Snapdragon, albeit with greater genetic diversity than ever before. The most powerful and recent, such as the OnePlus 9 and 9 Pro have the Snapdragon 888, while others like the POCO F3 bet on the slightly more modest Snapdragon 870 and the models launched last year are divided between the Snapdragon 865 and the Snapdragon 865+, which is only in the high-end of ASUS.

In terms of memory and storage, OnePlus repeats the play of the 8 and 12 GB of RAM with 128 and 256 GB storage, which is the same present in the rest of the high-end. For the moment, going up to 512 GB of storage or reaching 16 GB of RAM is still an option for mobile gamers ... or the Samsung Galaxy Note 10+. 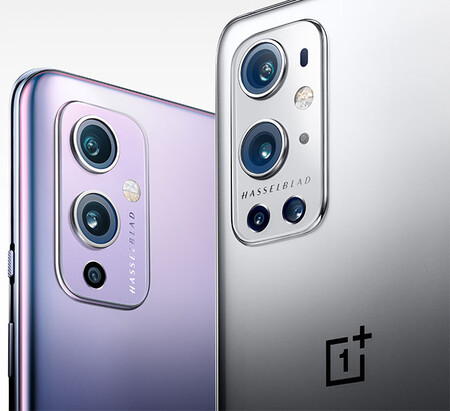 The OnePlus 9 has a triple camera and on the OnePlus 9 Pro it is quadruple. They are exactly the same - a 48 megapixel sensor, a 50 megapixel wide angle and a 2 megapixel monochrome sensor - but the OnePlus 9 Pro also incorporates an 8 megapixel telephoto sensor. In both cases OnePlus claims to have worked with the Hasselbad brand to optimize the cameras from the software side.

Signed by Hasselbad or not, few high-end have two high-resolution sensors like those of the OnePlus 9

The photographic bet of OnePlus, beyond being signed or not by a brand, does not differ much from that of other terminals in its range such as the recent OPPO Find X3 Pro, which has a very similar configuration, megapixel on top or megapixel on the bottom. Of course, although in gross megapixels Xiaomi clearly wins in its Mi 11, it is not very common to have two sensors around 48 megapixels. In the competition, the main thing is a main sensor of 48 or 64 megapixels and a third sensor of 13 or 8 MP.

The OnePlus 9 Pro has the fastest fast charging of the high-end, with cable and without it

The rest of the high-end terminals or have fast wireless charging at less speed or they do not have wireless charging, as is the case with the POCO F3, ASUS Zenfone 7 Pro or the Realme X50 Pro 5G. 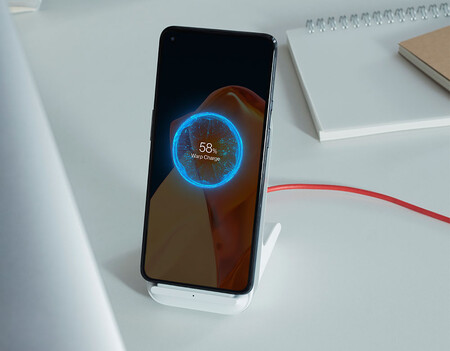 In terms of capacity, the 4,500 mAh is on the line and is that it is the most repeated figure and surpassed only by the 5,000 mAh of the Zenfone 7 Pro or the 4,800 mAh of the Galaxy S21 +. The fast charging with cable of the OnePlus 9, 66W, is still the figure to beat, because even faster fast charges are still reserved for the most eccentric mobiles and not for the traditional high-end.

To finish, we leave you the complete comparison table pitting the new OnePlus 9 and OnePlus 9 Pro against their direct competition in the high-end Android range. As there are many models, we have separated the table into two parts. First, in front of POCO F3, Xiaomi Mi 11, Samsung Galaxy S21 + and OPPO Find X3 Pro.

In this second table you have the OnePlus 9 and OnePlus 9 Pro face to face with other recent high-end terminals from this or last year. We pit them against Realme X50 Pro 5G, ASUS Zenfone 7 Pro, Sony Xperia 1 II, and Huawei Mate 40 Pro +.