Now you are ready to download the first stable version of AlmaLinux, the best positioned successor to CentOS 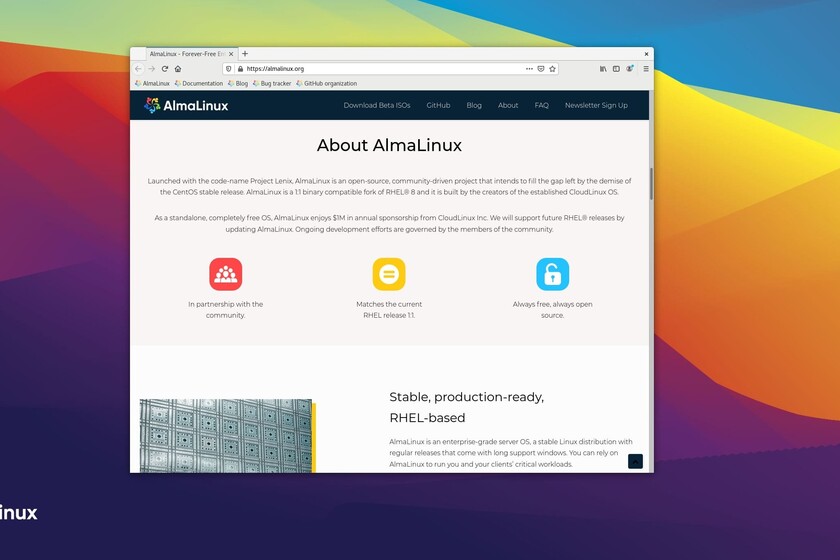 Following RedHat's controversial decision to shut down CentOS distribution, to replace it with a 'CentOS Stream' endowed with a totally different approach, several projects emerged focused not only on replacing, but directly on clone CentOS, to ease the transition since the latter.

One of these projects was Lenix, which came with the sponsorship of CloudLinux (developers of the eponymous distribution) and was quickly renamed AlmaLinux. This new distribution presented its beta version two months ago ... and now has just presented its first stable version.

After the release of the beta version, those responsible for developing AlmaLinux received the help of beta testers who thoroughly tested the new distribution to ensure its stability, one of the most appreciated aspects from the old CentOS (along with its long periods of official support, which still remain).

Ultimately, most of the work consisted of fix detected bugs and add new packagessuch as VMWare, Errata, SecureBoot, and AWS.

This first AlmaLinux is a binary fork of RHEL (Red Hat Enterprise Edition) 8.3; From what we know so far, future versions of AlmaLinx will seek to keep up with new versions of RHEL.

The AlmaLinux GitHub account shows specific repositories to get hold of specific installation images for Docker and the cloud, and their official statement talks about an imminent landing of the version of AlmaLinux for ARM processors.

Not everything is left to CloudLinux: there will be an AlmaLinux Open Source Foundation

Parallel to the announcement of its launch, CloudLinux has announced the imminent creation of a non-profit organization that will have as its name AlmaLinux Open Source Foundation.

This foundation is intended to take over the AlmaLinux project in the future, when you've had enough 'break-in time', and you'll be supported by an annual CloudLinux donation worth $ 1 million.

Jack Aboutboul, ex-Red Hat and Fedora engineer, will be in charge of running the foundation, with the help from the board of directors of Jesse Asklung (ex-cPanel director), Simon Phipps (ex-president of Open Source) Initiative), and of managers of CloudLInux, in addition to two other people who must be elected later by the community.