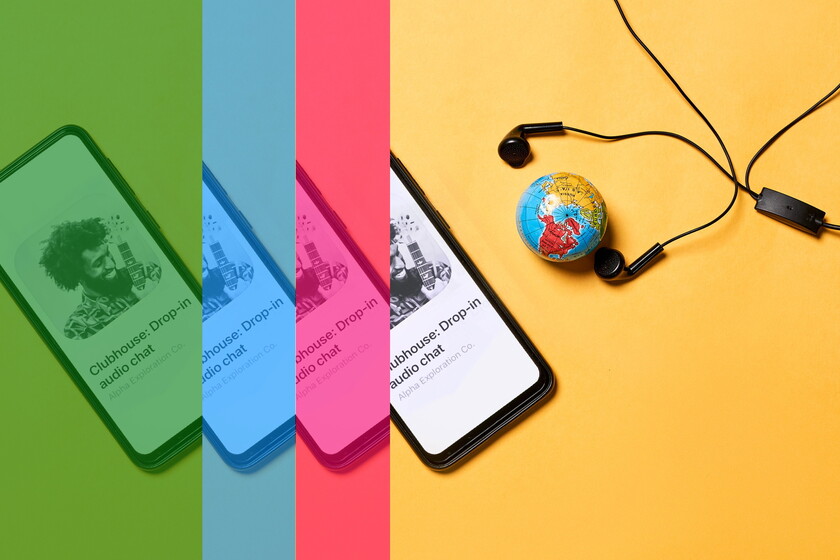 Clubhouse's success, the app that a few months ago landed with a groundbreaking proposal based on the relay of audio conversations, is generating a new trend (already baptized as 'social audio').

A new trend that is nothing but a new market ... on which other online platforms have already begun to pounce, copying without complexes the Clubhouse itself.

First it was Twitter who earlier this month featured Spaces, a new functionality integrated into its main app, which allowed to create, in a very simple way, public chat rooms (without limit of listeners) based on audio.

Still a few weeks left until all users have access to the functionality of creating such rooms (that is, of hosting the 'spaces'), but we can all use them as listeners.

Now on #TwitterSpaces You can Tweet your questions with #AskTwitterSpaces. pic.twitter.com/EaBpcIY5WY

In addition, Twitter has already announced that they are working on reinforcing this new functionality with details such as recording conversations, or the possibility that each 'space' has more than one host.

And after Twitter, Facebook- Reverse engineering expert Alessandro Paluzzi posted screenshots a few days ago showing that the social network that is working on its own partner audio proposall (in other words, in his own Clubhouse).

ℹ️ The feature appears to be in an early state of development, the UI is just a mockup at the moment. pic.twitter.com/vCBN7MCB6r

Actually, much of the work has already been done, because shortly after the pandemic began, the social network launched Messenger Rooms to facilitate communication during confinement (and as response to Zoom's success).

So now launching audio-based chat rooms just takes a step back in the technical section and save some bandwidth. Their engineers would just have to add the live broadcast function. 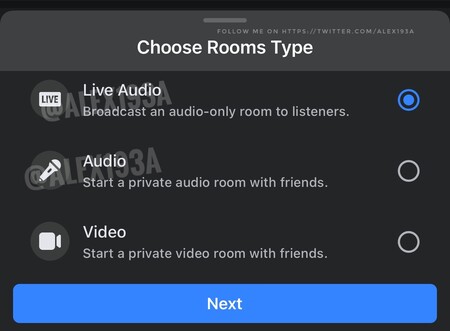 Telegram is not far behind

More: just a week ago, we informed you that Telegram was also working on a similar function for its channels, which would allow their administrators to have voice chats with their subscribers.

It would be one more way to take advantage of this new trend, since Telegram had already added voice chats to its groups in December.

We don't know what Spotify has in mind

Another online platform determined to make the interactive dimension of audio profitable is Spotify; after becoming the undisputed leader of music streaming, has been working for some time to fill the same role in the podcast field ...

... and they don't seem to want me to the irruption of 'social audio' caught them with a changed foot, judging by the surveys that it has begun to show to some of its users in which it asks them about the use of Clubhouse, with questions such as the following:

How long has it been since you installed Clubhouse on your mobile and used it for the first time?

How many times have you used Clubhouse in the last seven days?

When you use Clubhouse, how much time do you spend on the app?

In the coming weeks, we may conduct a follow-up investigation on Clubhouse and Clubhouse users. Would you be willing to have a longer conversation with someone from Spotify about this?

Spotify want to know more about how Social audio effects podcast and music consumpsion. Asking it's users about their Clubhouse habits. https://t.co/af8eoSgEHJ

Are their managers thinking about Get on the 'let's copy Clubhouse' bandwagonlike Twitter and Facebook? Are they thinking of somehow integrate your platform with the popular app? Or maybe even in buy it?

And Clubhouse should get on with it.

Be that as it may, this new trend seems to have come to stay. What is not so clear is that Clubhouse will be able to capitalize on its own innovation.

And it is that, without having been able to launch an Android version yet (the most used operating system on mobiles), and still seeking to equip themselves with an adequate infrastructure for the current demand, it is possible that they what already happened to Snapchat and its stories, or to Meerkat and the microvideos.

That is to say: another groundbreaking innovation more than finally it did not serve more than to reinforce the leadership of Instagram (in the first case) or Twitter (in the second) once they decided to plagiarize the rival's format.

In fact, the own Twitter is now available on Android, and from April it will allow any of its current users to create their own chat rooms.

Let's add to that the synergies that can be created between Facebook audio chat rooms and 'groups'of said platform, in which 1.8 billion users participate every month. And finally, the interest of Spotify, whatever it is you are thinking of doing.

In short, Clubhouse creators are better off getting the hang of it If you do not want to go to the drawer of the history of technology companies.