How to change the icons on an Android mobile

Personalization is one of the main strengths of Android, and that is that the green robot's operating system allows you to change themes, fonts, and wallpapers to a lesser or greater extent. Obviously, they can also be change icons.

If you are bored of seeing the same icons every day, the good news is that on Android it is possible to change them in two different ways. For this you basically have two options, depending on the brand of, depending on the manufacturer of your mobile. You can use the house themes feature or a launcher that supports icon packs. We will see how to do it with both methods.


For a complete change: use the themes

There are mainly two ways to change the icons on an Android mobile. The most complete way to do it is from the mobile settings, although it is not a native Android function, so it depends on whether the manufacturer has included the function in the personalization layer of the mobile.

Some Android layers include more comprehensive customization features, allowing you to change themes and icons, generally from the settings or an application called Theme, Themes or similar. This is how it works for example on Huawei phones with EMUI or Samsung phones with One UI, to name two examples.

The advantage of using the native option is that icon change applies to the entire system and not just the pitcher. That is, every time the icon appears on the mobile it will do so with the new icon pack design and not only in the launcher.

The nice thing about this method is that the icons are changed throughout the system. The downside is that you have fewer icons to choose from.

The problem with this method is that often these theme apps only allow you to use themes and icons obtained from own stores (Galaxy Store on Samsung and App Gallery on EMUI). These stores do not have as many icon packs as Google Play, especially free.

It would be impossible to make a step-by-step list of the process to install icon packages natively in all the customization layers that support them, although the process is in all cases similar: open the themes app, find an icon pack you like, download and apply it.

The process to install icons natively in EMUI

As we mentioned before, the main advantage is that this method will change the icon throughout the system and not just on the home screen. Nevertheless, Neither pure Android nor some customization layers allow changing the icons natively, so if that is your case you will have to resort to the following method. In summary, this is the process:

For the rest: use a launcher that supports icon packs

Ideally you should use the previous method whenever possible, although if your mobile does not have the possibility to install themes and icon packs or if you want to access a larger catalog of icons, you can always achieve almost the same with a launcher that supports icon packs.

Keep in mind that in this case the icons you change will only show up in the launcher itself and not in other parts of the system such as the recent view or the settings menus. The normal icon will continue to be displayed there. 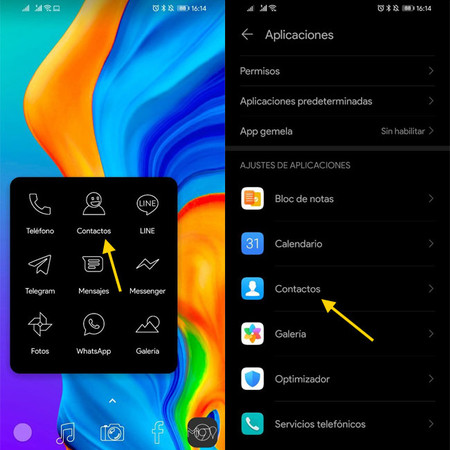 If your mobile does not support themes, you can change the icons in the launcher, although they will not be changed in other parts of the system (for example, in settings menus)

Find an app launcher with icon pack support It is not difficult, as over time it has become more the norm than the exception. The major launchers support icon packs, but if you need names, here are a few:

In this case, you must download the icon pack on your own, and it won't cost you to find hundreds and thousands of them on Google Play. They do not have a category for themselves, but live with wallpapers, themes and other applications within Personalization, although the easiest way to find an icon pack on Google Play is to type "icon pack" in the search engine.

Find an icon pack that catches your eye, and otherwise there is no difference between downloading these icon packs and any other app on Google Play. Press to download and wait for it to finish. When it's done, you don't need to open the app, which generally only shows information about the icons and access to make missing icon requests.

Instead, you will need to go to the launcher settings and look for the option to choose the icon pack. This can vary from launcher to launcher, although it should generally be in Appearance - Themes or similar. If the icon pack you downloaded is compatible - and it generally will be - it will appear for you to choose from in the list.

The process in Nova Launcher

Icon packs include hundreds or thousands of icons, but there will always be applications that do not have an icon specially designed for them. For those cases Nova Launcher has an advantage over other launchers, and that is that instead of showing the normal icon, it can generate icons for unsupported applications to get out of the way.

If at any time you change your mind and want return to normal icons Instead of using an icon pack, you just need to retrace your steps and switch to the "system" icons in the launcher options. In summary, this is the process: