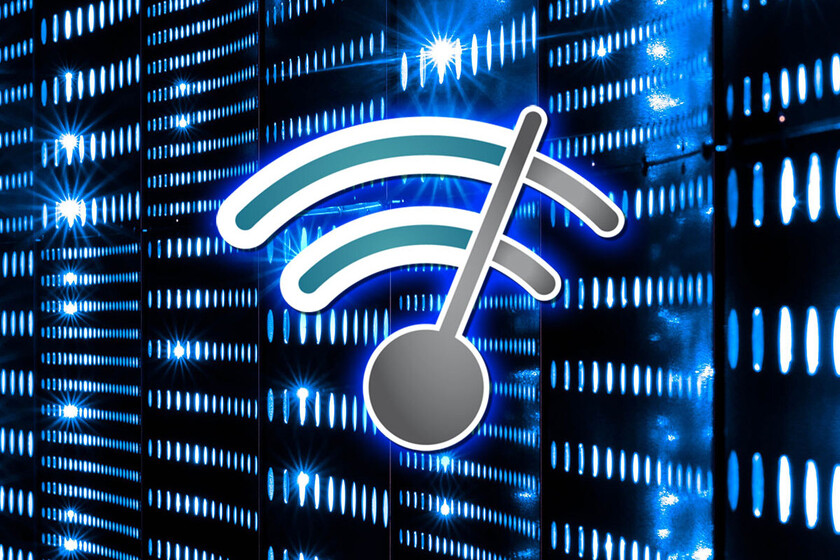 Only a few applications manage to conquer the title of legendary: those that remain useful many years after their launch. A good example of this is WiFi Analyzer, an application focused on a single concept: analyze nearby Wi-Fi networks and help you choose the best channel for your Wi-Fi.

Although the main function of Wi-Fi Analyzer is to give you the necessary information to choose the best channel for your Wi-Fi network, the application has several different utilities that give you valuable information about your network. We tell you everything that WiFi Analyzer offers you in your application for Andorid.


See which channels are using nearby Wi-Fi networks

After opening WiFi Analyzer and granting the necessary permissions for its use, the first thing you will see in the application is a series of colored wave charts. These graphs show overlapping the Wi-Fi networks to which your mobile has access and the channels in which they work.

At first, the information can be difficult to interpret, although the concept is simple: on the horizontal axis you have the channels and on the vertical axis the signal intensity in dBm (decibel-milliwatt). The higher the intensity, the better. The fewer networks that use the same channel, the better, as this will not cause interference between them. 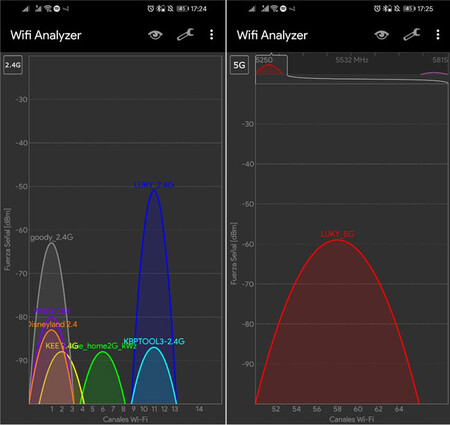 The application shows the graphs of all the networks, regardless of whether you are connected to them or not. You must therefore search for your Wi-Fi network and see if you are sharing channels with other networks In the neighborhood. If so, it is a good idea to change the channel of the connection. The application allows you to switch between 2.4G and 5G mode, with the button at the top.

If all of this is still too technical for you, WiFi Analyzer has an easier way to query the same thing. Tapping on the eye icon and choosing Channel scoringYou can choose your Wi-Fi network in the drop-down menu and then you will be shown a list with all the available channels and a star rating next to each one. 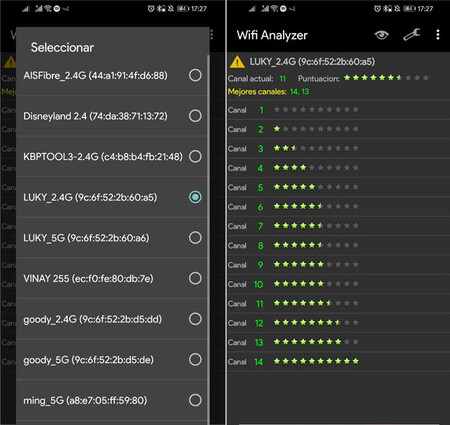 The idea is simple: the higher the score of a channel, it is more recommended that you use it on your Wi-Fi connection. In the screenshot above, for example, the best available channel is channel 14.

In a related way, with the time graph mode it does not show you the channels, but the progression of signal intensity on a timeline that is updated periodically (you can change the update frequency in the settings). 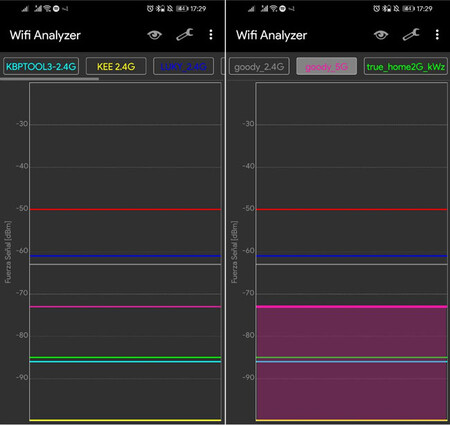 The idea here is not to compare channels, but to see how the signal strength varies while, for example, we move around the house to find where the signal best reaches of the Wi-Fi connection. The app shows all visible Wi-Fi networks, although you can tap on one to highlight it.

Again, the app gives you an easier way to do the same: with the view of the signal meter. Instead of having timelines, you are shown an indicator of the signal strength of the network of your choice. 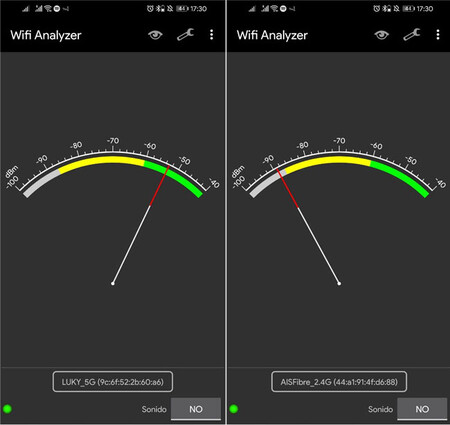 The application itself shows you if the dBm value is good or bad with a color code: green is good, yellow is ok and gray is bad. Again, the idea is to move around the house to check signal coverage.

Get information from each Wi-Fi network 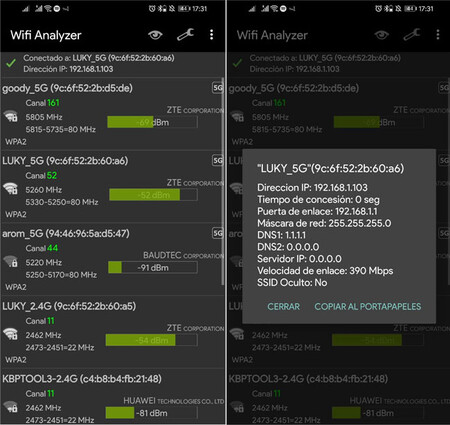 The view AP list It is similar to the Android Wi-Fi networks section, although it shows more information about each Wi-Fi network. You have the name of the network, the channel, the brand of the router, the signal strength and the security of the network.

Also, if you are already connected to a Wi-Fi network, tapping on it at the top of the screen displays a window with information about current connection, such as your local IP address and DNS servers, as well as the speed of the link.

Save data to review later 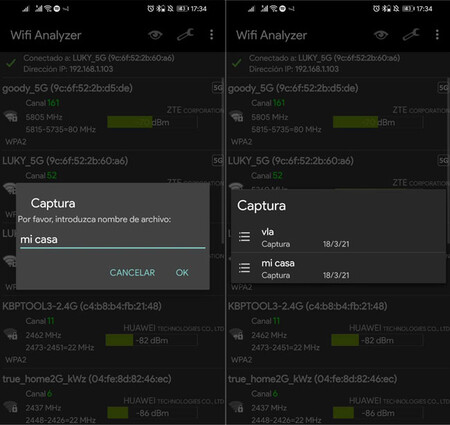 A very useful feature of WiFi Analyzer is that you don't need to do data collection and analysis at the same time. With the menu Capture> Capture, you can save the current status of the analysis to refer to it later. You can choose a custom name for said capture.

Similarly, with the menu Capture> View, you will see all the different captures that are saved on the mobile. When you open one of them, you will be able to see the status of the Wi-Fi networks at the time you saved that capture. 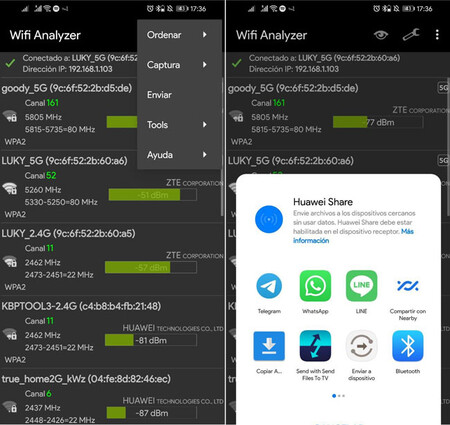 If you want to share the data with another person, you can do it with the menu Send, with which you can send an XML file with the data and save it in applications such as Google Drive or share it with other people in apps such as WhatsApp or Telegram. 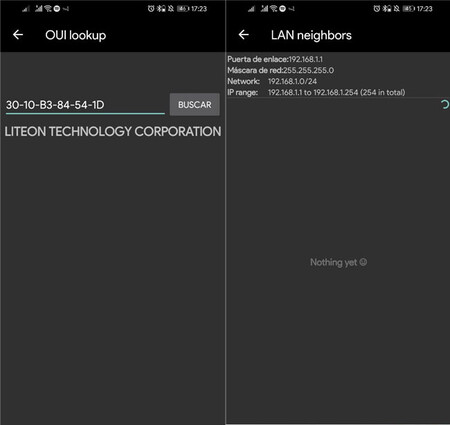 In addition, WiFi Analyzer includes two little tools extra under the Tools menu. The first one is OUI lookup, with which you can enter a MAC address to obtain the unique identifier of the organization, which indicates which company it belongs to.

The second tool is LAN neighbors, which should show devices connected to the same Wi-Fi network similar to Fing, although it doesn't seem to work today. After all, the application has not been updated for three years. 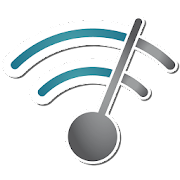