12 Little-Known Android Features That Can Be Very Useful 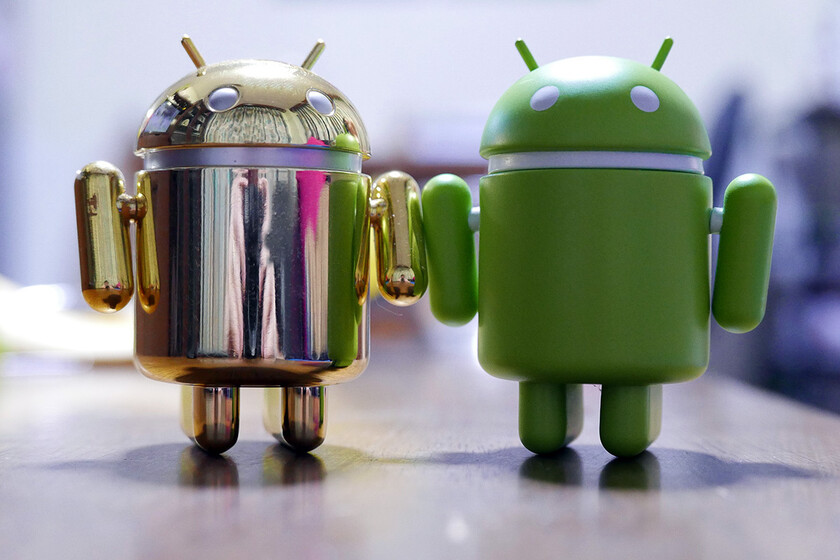 More than 12 years have passed since the first version of Android and, version after version, the operating system has been improving and adding new functions. Over time, it becomes increasingly difficult to keep up with everything it offers, so some functions may go a bit unnoticed for someone who doesn't follow evolution closely.

In this article we collect 12 little-known Android features of the last five versions of Android and that are not difficult to find in any current terminal, regardless of its customization layer. 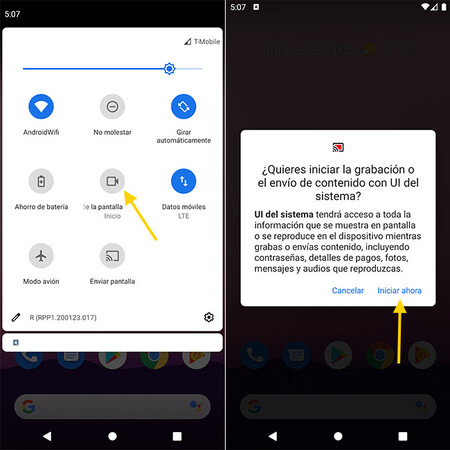 Many layers of Android customization include for years the possibility of record the screen to video one way or another, although this did not officially reach Android until Android 11.

Although its use may vary if you have a mobile with a Huawei, Xiaomi or Samsung interface, the concept is usually similar: a quick setting with which you can easily start a recording. This setting is not always set or visible, so you may need to first configure the settings to get it into position.

Your phone remembers the password of all the Wi-Fi networks to which it has connected, but finding out what that password is was not easy until recently. In the beginning of Android, root was required, but with recent versions it is no longer necessary: ​​you can share a Wi-Fi connection with a QR code. 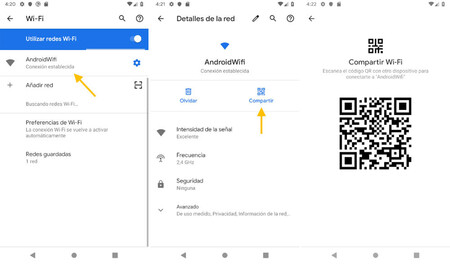 The process can vary in versions and layers of Android, although it is usually similar to the following: open the Android quick settings, make a long tap on the Wi-Fi setting and tap on the network you are currently connected to. You will then have the option of Share as a QR code, which someone else can scan to connect directly, without entering a password.

The latest version of Android, which is not yet official, gives a twist to the matter by adding to the mix sharing Wi-Fi connections through Nearby Share. It is basically the same, but with the code being sent to the other person's mobile, rather than having to scan it with the camera.

Rotate the mobile from the navigation bar

This is personally one of my favorite tricks that, being a small button that only appears once in a while, it is easy to go unnoticed. Since Android 9 Pie, the Android navigation bar adds one button to rotate the screen when you have the screen rotation disabled, but you have rotated the mobile.

It sounds like a tongue twister, but it makes more sense than it sounds. If you are using the mobile lying down and you have deactivated the automatic rotation, this way you can switch from landscape to portrait mode whenever you want, without having to constantly turn the screen on and off.

QR codes have been with us since time immemorial, although it was not until recently that their use has exploded. There are infinite ways to read QR codes with or without applications in between, although all you need is the Google Assistant or, a part of it, Google Lens. 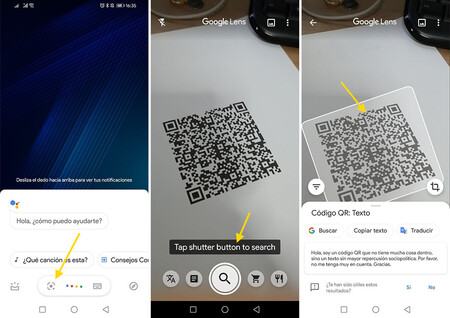 With any relatively recent Android mobile, you can scan a QR code with a long press on the start button or the gesture or button to start the Google Assistant. Then press the Google Lens button and, finally, point to the QR code.

This gesture or quick shortcut has been in Android since before the gestures arrived, although it is easy to go unnoticed unless you start pounding the buttons. It is a way of switch from one app to the previous one without going through the Recent view.

It is something like the Alt + Tab of Android, and it is carried out as easily as pressing the square button twice (the one that opens the Recent view). In this way, you toggle between the last two apps you have used.

The same version of Android that brought us the method to switch between applications was officially released split screen mode: Android Nougat. This mode took some time longer in some layers of customization, such as Samsung.

There are several ways to use split screen on Android: with one long press on the square button or from the recent view, by long-tapping the app name or pressing the overlay button. First you choose an app that is shown in the middle of the screen and then you can open the second one. The split screen works both vertically and horizontally. 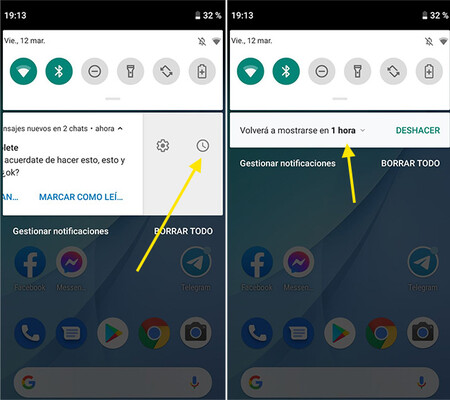 If you get a notification at an inopportune moment and you want to get it out of the way, but not for it to disappear forever, an alternative is postpone notification. Android has changed how this works a bit in the latest versions, but the normal thing is that you can postpone any notification that is not permanent, moving it a little to the side until the clock button appears.

In some layers there is not a button, but a snooze text that appears when you make a long touch on the notification. Generally, you can choose for the notification is displayed again after a certain timeabout an hour later. 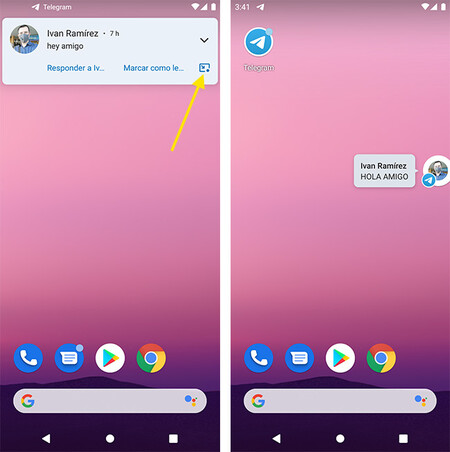 We will see chat bubbles in all their glory in the next version of Android, but Android 11 already incorporated chat bubbles and more and more applications are compatible with them. By activating them, you can make any notification float, making it easier for you chat without leaving the current application. 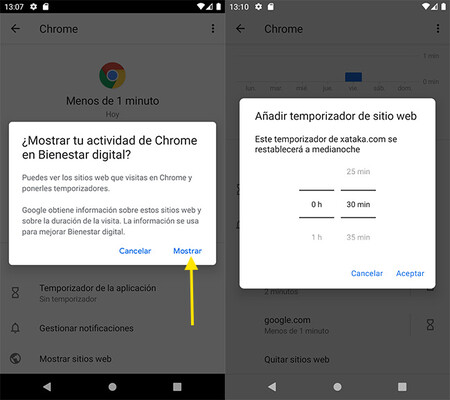 Digital Wellbeing arrived in Android 9 Pie as a way for you to set limits -if you want- to the use of your mobile. One of these limits allows you to limit how long you use an application, to which in Android 10 another option was added: limit how much time you spend on any website.

Like the rest of the digital wellbeing options, it is deactivated at the factory. To activate it you need to go to the mobile settings> Digital Wellbeing> Dashboard and tap on Google Chrome. You must activate then Show websites. From that moment, you will see how much time you spend on each website and you can limit its use to certain minutes or hours a day. 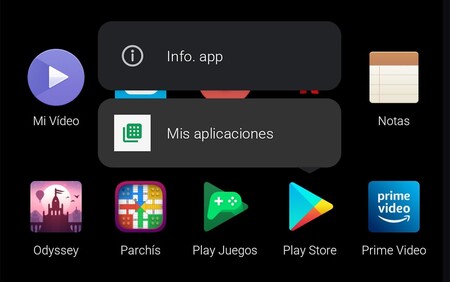 For some versions now, Android applications may have a kind of menu with which you can directly access a specific section, instead of always entering the first screen. This menu is accessible, in the apps that support it, with a long touch.

This menu is already relatively unknown, but the most important thing is that in most Android launchers, you can drag menu items to add them as shortcuts on the home screen. Thus, you can create a shortcut for the 'My applications' section of Google Play. 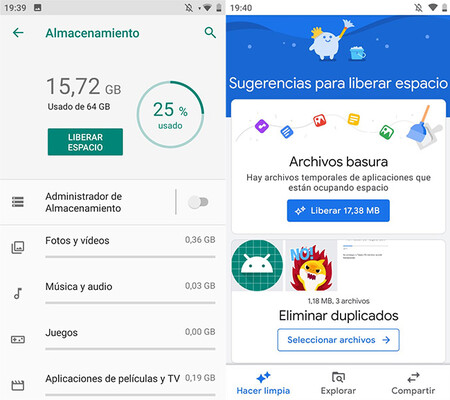 Forget about lying applications like Clean Master, if you go a bit tight in the storage space of the mobile, you do not need to install any application. Instead, Android has long incorporated into its storage settings a summary of where your space is going, with the option of freeing up space in various ways.

In the most modern versions, this task is carried out by the Google Files application, the pre-installed file manager. With Google Files you can free up space by deleting duplicate files, images you probably don't want and looking for large files. 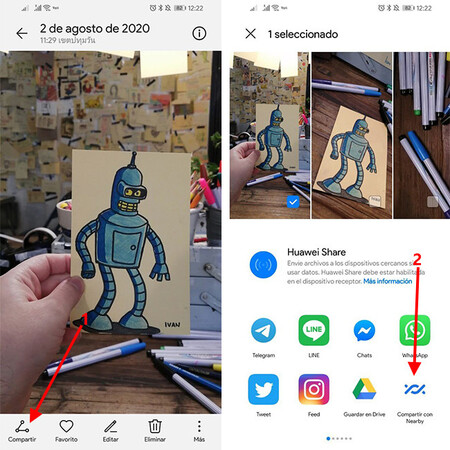 A recent Android novelty that is not tied to a specific version of Android is Share with Nearby. It is a simple way to send files to nearby mobiles using technologies such as NFC, Bluetooth and Wi-Fi Direct.

Share with Nearby is integrated into the quick settings menu and you will also find it in the Android share menu. The recipient's mobile needs to have activated Share with Nearby to appear as visible, which can be done from Quick Settings.