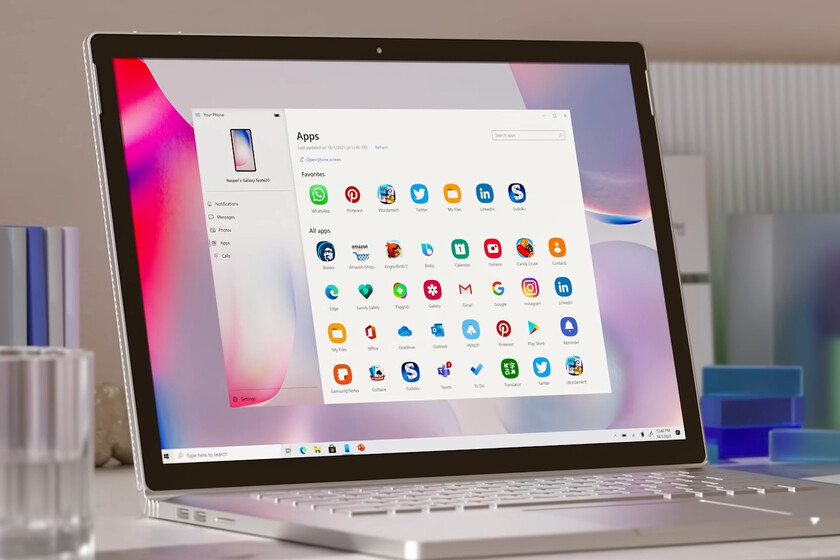 First was the ability to run Android apps on Windows 10, one by one, and now the option to run several at the same time thanks to the Your Phone application and some Samsung devices. It was announced a few months ago and in recent days Microsoft has confirmed that it is coming true.

The lucky phones that have already started to enjoy this possibility are The Samsung Galaxy Fold, Note20 5G, Note20 Ultra 5G, S20, S20 +, S20 FE, S20 Ultra, Z Flip, Z Flip 5G and Z Fold 2 5G. For now, the new Samsung Galaxy S21 is not mentioned, although it is presumably compatible with this feature.

Thanks to its latest update, your Phone allows you to run various Android applications on your PC, although you need to have a compatible Samsung device

The feature should work on supported devices, which must be running at least Android 11 and the latest version of the Microsoft app, since last Thursday. For everything to run smoothly on your computer, Windows 10 must be updated to the May 2020 version or later.

If everything works as expected and the linking is successful, we must be able to instantly access Android applications installed on our terminal directly from our Windows PC and run simultaneously as we do with any computer application.

In addition, as we already know, this close relationship between our mobile and our computer allows us to add android applications as favorites in our team, anchor them to the Start menu or the taskbar and use them, of course, in parallel with those of the PC itself.

For now, we do not know if Microsoft plans to extend this feature to other Samsung devices or other brands in the short term in the near future. What we do know is that the American company has been working on similar solutions for some time and projects like Latte give a good account of this. For iPhone usersFor now, there are also quite interesting alternatives.