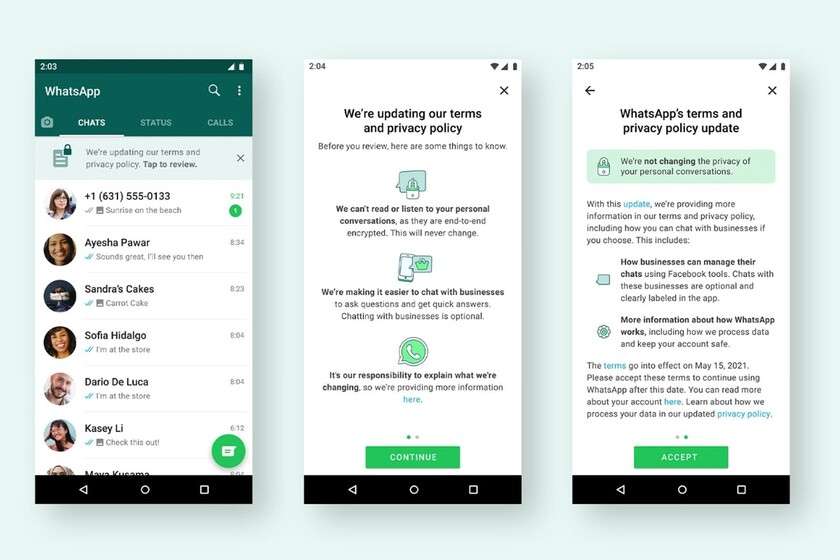 At the beginning of January, WhatsApp announced changes to the terms of use and privacy policy that would force users to users to share their data with Facebook in order to continue using the app as of February 8 (this does not apply to users in the European Union). The controversy that this decision aroused led to a massive move of users from WhatsApp to other applications messaging service, so the Facebook app postponed its mission to better explain the change.

Today he announced his plans to "ask WhatsApp users to review our Terms of Service and Privacy Policy", because according to them, that mistrust that occurred in January was due to the "great amount of rumors and misinformation related to this update".

To do this, in the coming weeks, the company will publish a banner on WhatsApp that will allow access to the web where the changes in the privacy policy are explained. After a while users will be reminded to review and accept these updates to continue using WhatsApp, says the company, which does not give dates in its official statement but does Twitter profile: the changes will finally be on May 15.

There is nothing that comes between you and your privacy. Chatting with a company is optional, and the chats are clearly labeled in the app. You have the control.

The controversy of joining WhatsApp data with Facebook data 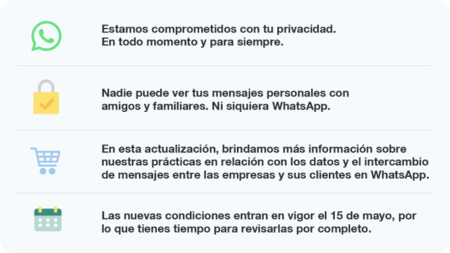 In its official statement, WhatsApp has avoided naming Facebook, rather than saying some shopping features are integrated with Facebook. And it must be remembered that the fact that both platforms are going to share information was one of the most controversial points in January.

Just today marks seven years since we published the announcement that WhatsApp was acquired by the firm of Mark Zuckerberg for 19,000 million dollars. One of the initial objectives of the acquisition was to share the data of WhatsApp users with Facebook, which has not stopped raising controversy since then until now, especially in the European Union.

The announcement that took place at the beginning of this year led millions of users to move to other messaging apps with more secure privacy policies, such as Telegram or Signal. In addition, Telegram took advantage of the situation to release version 7.4 of its app for iOS and Android that included among the novelties the possibility of moving the chat history from other apps like WhatsApp, Line and KakaoTalk to Telegram.

The case of the European Union is different 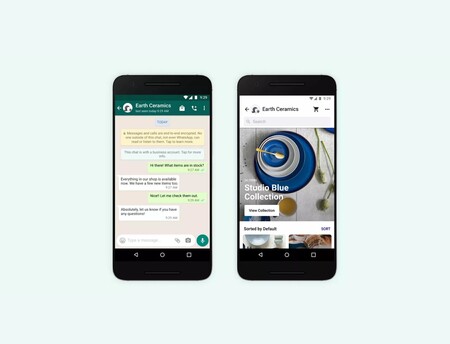 "Currently, Facebook does not use the information in your WhatsApp account to improve experiences with Facebook products or to provide you with more relevant advertisements on the platform. This is the result of discussions with the Irish Data Protection Commission and other European data protection authorities. "*

As indicated by a company spokesperson [a Xataka] (https://www.xataka.com/privacidad/whatsapp-ahora-compartira-datos-facebook-contrario-no-se-podra-usar-no-afecta-a-usuarios-union-europea):

"There are no changes to WhatsApp data sharing practices in the Europe region (including the UK) arising from the updated Terms of Service and Privacy Policy. For the avoidance of any doubt, it remains true that WhatsApp does not share WhatsApp user data from the Europe region with Facebook in order for Facebook to use this data to improve its products or advertisements. "