we tested the case with S Pen Smart Clear View 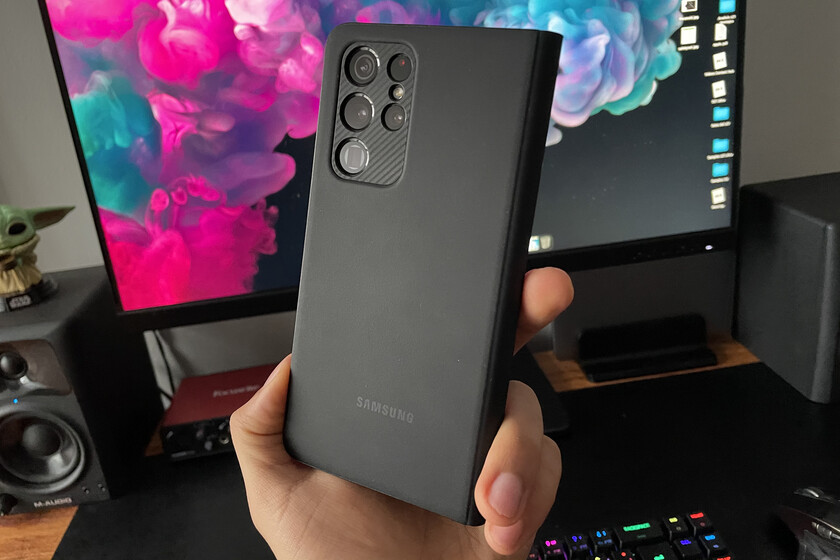 With the arrival of the new Samsung Galaxy S21 family, a novelty landed on the company's most ambitious model: the Galaxy S21 Ultra. is the first Galaxy S compatible with S-Pen. This compatibility comes from the hand of a case that serves to store the pencil, since the terminal does not have physical space for it.

We are going to tell you about our experience with the new case with S-Pen for the Samsung Galaxy S21 Ultra, the flagship accessory for this phone, after a few days of using it to protect the device and use it together with the S-Pen. 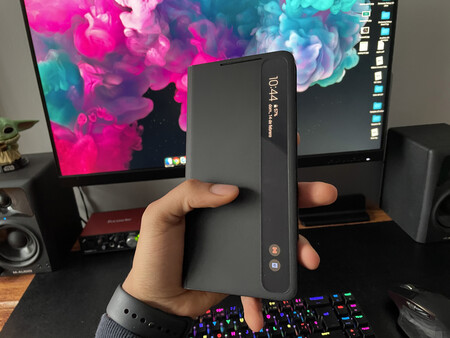 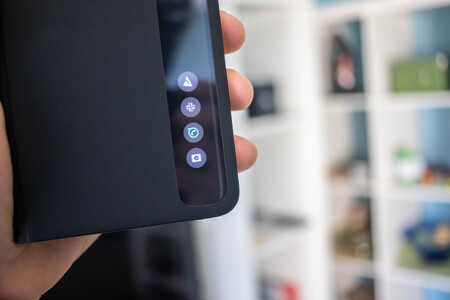 Through the small window of the case we can see the icons of pending notifications.

The Galaxy S21 Ultra's Smart Clear View case is well finished. Samsung has used a rubbery plastic as a material, with a slightly rough finish. On the front the cover has a large transparent vertical strip, through which we can see the time and notification icons. In this way, in a simple glance we can know if we have a WhatsApp message, email, missed call and others, although we will not see text, only the icon. 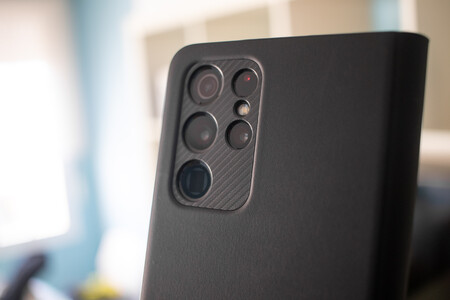 On the back, the case covers the large camera module of the S21 Ultra with a sheet with a vinyl finish, protecting the lenses and the flash against possible drops. The grip of the case is quite goodAlthough the Samsung Galaxy S21 Ultra is already a large and thick device, with it it becomes even more voluminous and heavy. The weight of the S21 Ultra without a cover is 228 grams, so if we add the 96.4 grams of the cover we stand at almost 325 grams, a very high figure for a device that we usually hold with one hand. 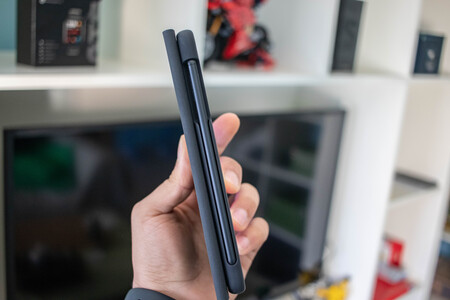 The inside of the sleeve leaves plenty of space for the S-Pen, which we will talk about later, since it is slightly different from the Galaxy Note 20 Ultra. It has just enough space to store this pencil, being well attached so that it is practically impossible for it to fall, no matter how much movement or blows the case suffers.

The main drawback of the case is the thickness and weight it adds. They are practically 325 grams and two centimeters thick with the cover open and folded out

If we are used to book covers and their cons, we will not have any problems with the Smart Clear View of the S21 Ultra, but if we are newcomers to this type of case there are some problems to solve. The first one is that the grip with the cover is not too comfortable. Not only do we have the increase in thickness of the cover itself, but also, when it is unfolded, the back part is added: in total they are two centimeters thick with the cover open. 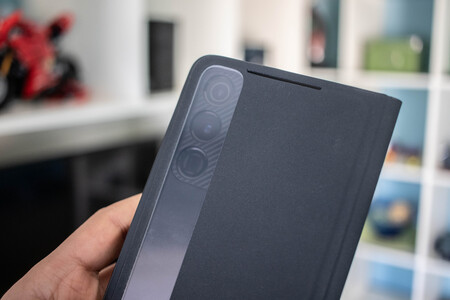 If we have the case unfolded, the vertical strip coincides with the camera module, but only halfway.

As we indicated, this will not be a big problem if we are already used to these covers, but there is an inconsistency in the design that will mean another inconvenience. The vertical stripe on this case only leaves room for three of the S21 Ultra's five lenses., covering the 3X telephoto lens and the laser sensor.

Although the vertical strip leaves space for three of the S21 Ultra's cameras, it detects that there is something covering them and the telephoto lens stops working

On this basis, we will not be able to use that optical zoom and we will have worse focus but, in addition to this, the mobile detects that there is something covering the cameras that are uncovered, so the 10X telephoto lens stops working. If we want to take advantage of the S21 Ultra's camera, we will have to use the open cover as if it were a book, something quite uncomfortable.

In short, the case meets the level of finishes and protection of the device, but usability is a point to improve. That the open case covers the cameras does not make much sense and is a notable handicap in a terminal whose camera is one of its strongest points.

The S-Pen in the Samsung Galaxy S21 Ultra 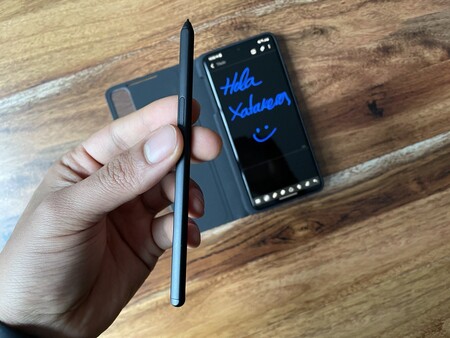 The Samsung Galaxy S21 Ultra is the first device in the S family with S-Pen support. The S-Pen that comes in the case is much larger and wider compared to the S-Pen included in the Note. This, in the opinion of a server, is more of an advantage than a disadvantage, as it is easier to grasp and handle. Tips are the same, with refills in the holster box.

The S-Pen in this case is not Bluetooth and does not have a built-in battery, so functions such as remote shooting are lost

As for the operation of the S-Pen, it is different at the software and hardware level. In a Note, as soon as we remove the S-Pen from the body of the terminal we can take a note quickly, thanks to the function screen off memo. In the S21 Ultra this function is not present when removing the pencil from the case, although we can activate it by pressing the S-Pen button and touching the screen when it is off. 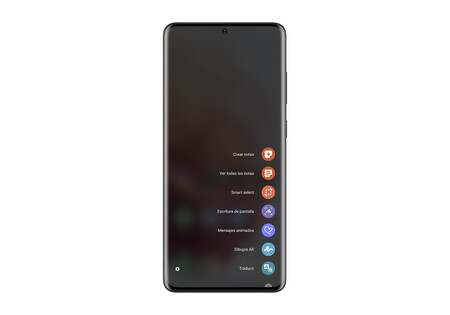 When the screen is on and we take out the S-Pen in a Note, the function menu is activated. In the case of the S21 Ultra we will have to activate this menu manually, by clicking on the S-Pen icon on the screen. Features like the remote trigger are also lost on this new S-Pen, as it doesn't have a built-in battery and Bluetooth capabilities, as is the case with the Note.

Saving these little differences, the operation is the same with this S-Pen, being able to draw, take notes, use apps that have integration with it and increase productivity with the phone by using this touch pen. 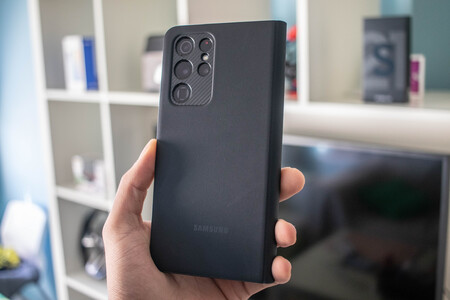 If you want to enjoy the S-Pen and you were going to choose yes or yes for a book case to protect the S21 Ultra, the new Smart Clear View case is a good option. It protects a lot, the finish is quality And being able to enjoy the S-Pen in a Galaxy S is a big step forward for the company.

Protection and usability of the S-Pen is the greatest goodness of this case. Its weight and ergonomics are the factors that penalize it the most

In the event that we are not very used to book covers, the thickness and weight will be an even greater handicap, since the open and folded cover is about two centimeters thick. Its price is 89.90 euros and is beginning to land in the official store of the company and distributors.