this is the covert advertising of some influencers about sports betting 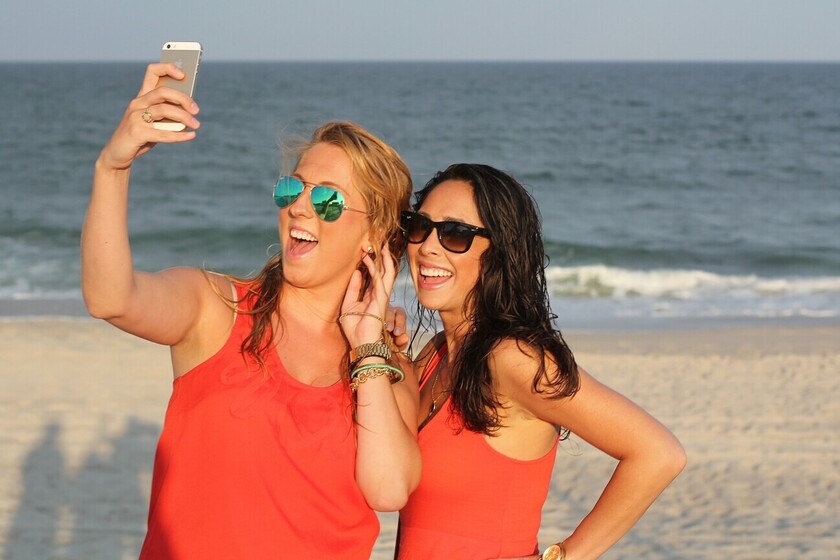 "Ask me a question!" It is one of the typical practices of influencers in their stories to maintain an interaction with their audience. During the past weekend, various known people on social networks have had to respond in their stories to exactly the same question: "How much do you earn per month with Instagram and such?".

All these people have responded that what they make money with, really, is not with the networks, but with the auctions and, curiously, all of them have won the same amount of money. They started betting 30 euros and in a single afternoon they had 1,043 euros (or 1,040) in their pockets, as shared @Soyuncharizard, after discovering the "chance". 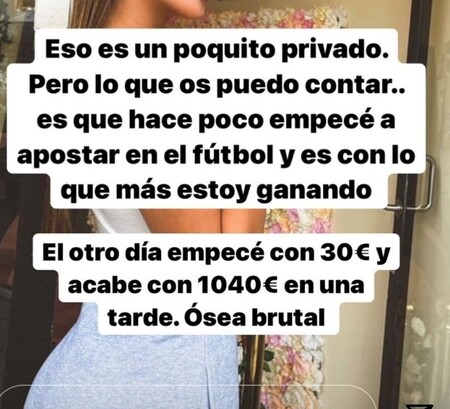 As we all know, stories are deleted after 24 hours unless the same user puts them in their "highlights", but different Twitter accounts have made public this "phenomenon" of influencers earning just over 1,000 euros in just one afternoon for betting online in football auctions and this has raised controversy. This type of practice can have legal consequences for influencers, for different reasons.

It should be said that the campaign was more subtle and did not start with users talking about money. Before they appeared other lighter questions such as "where are you from" and the influencer in question was talking about his people. Later, when they were consulted more thoroughly about sports betting, those involved in this alleged scam explained that they were part of a free Telegram channel where betting information is shared. They say that as they earn money, they bet those amounts again, to the point where by chance all the profiles that have been caught, reached 1,000 and little euros (some say 1,040, others 1,043 euros). 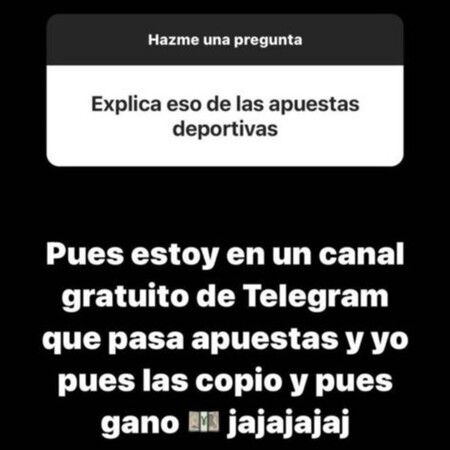 According to the various screenshots and information shared on Twitter, Jesús Sánchez and Diego James Lover, contestants of the third edition of the Island of Temptations; Genissa González, (sister of Sandra Pica, reality TV contestant); Marina Yers, known for having more than 4 million followers on TikTok and 1.5 million on Instagram; and other famous people for having accumulated tens or hundreds of thousands of followers in their social networks such as Alexandra Moreira, Lauraomr29 or Jùlia Uso; have participated in this advertising campaign in their stories.

Genissa González has decided to rectify the criticism of her followers, recognizing that it is "terrible to incite people to make bets." Meanwhile, Alexandra Moreira responded to those who questioned how it was possible that more people had earned the same amount of money in an afternoon that "is normal" because she joined the group to play with others and they bet 30 euros each, as you can see in the screenshot shared by journalist Javi Guzmán.

Other. Alexandra Moreira 👇🏼
Supposed question: "But if I saw another girl who uploaded the same capture of money as you"
Influencer: "Normal, we put 30 all" pic.twitter.com/ijx9whBVgm

A. Díaz González, general health psychologist and expert in gambling, comments that "almost all the cases of young addicts that I have dealt with in recent years are people who came to the world of poker, online gambling or video games under the influence of relatively famous people ".

According to the psychologist, Most of his patients have acknowledged that they started playing after seeing "advertising of soccer players who advertise it on television, youtubers who play and record it and also who have followed recognized people through other platforms such as Twitch or other social networks or also the casters (video game commentators) ".

"Accepting these campaigns may be attractive, but when in doubt, consult an attorney." 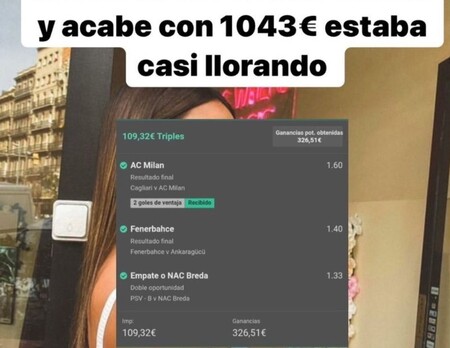 The legal implications of something like this can be several. Sergio Carrasco Mayans, a consultant at Fase Consulting, explains that "the current Information Society Services Law regulates commercial communications carried out electronically, which would include activities related to influencers through their social networks These commercial communications They must be clearly identifiable as such to guarantee the defense of the potential consumer, but unfortunately what we see is a perception of total impunity on the part of a large part of these influencers, who carry out advertising without any identification ".

Breach of obligation supposes a minor infringement in accordance with art. 38.4.c) which may imply a fine of up to 30,000 euros. "In other countries they have already gotten serious about controlling covert advertising on social networks, but here the first steps are still being taken," the lawyer clarifies.

In the words of Sergio Carrasco Mayans, "accepting one of these campaigns can be attractive, particularly in those profiles that have just begun to have a certain impact, but it is important to take into account the associated risks. "The legal expert warns people willing to market their profiles through social networks about the risks of the agreements that pacten.

"No matter how much they present themselves as agencies, in charge of carrying out all the necessary actions, It is important to have the advice of an independent third party expert in the field, especially when we talk about legal concepts which can be complex. "For this reason, he says, in case of doubt it is necessary to consult a lawyer, so that the activity can continue to be carried out peacefully.

From Segarra Abogados they explain to influencers (or aspiring to enter this market) and to those who want to have their services that "at the time of hiring, the commercial regulations that regulate not only the contract itself, but all the measures and precautions regarding the advertising to be done (General Law of Advertising, Law of Unfair Competition, Law of Services of the Information Society and Electronic Commerce, the Law of Consumers and Users, the Law of Intellectual Property ...) ".

Second, it is important for the influencer to know the tax regulations, how this relationship is taxed and the remuneration received for it and, what are the consequences with respect to the Treasury for having created a commercial or labor contract with the contracting brand. 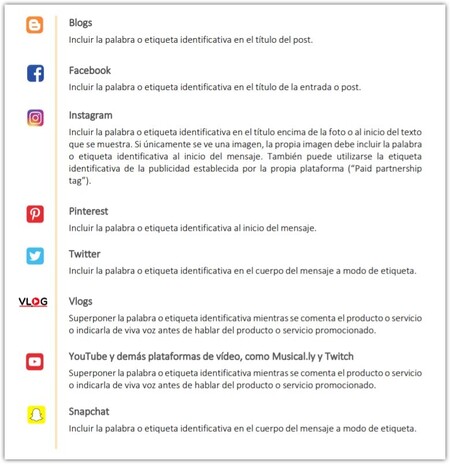 This means that if it is not clear that it is advertising, it will be necessary to include "an explicit, immediate and appropriate indication to the medium and message about the advertising nature of such mentions or content "through expressions such as" advertising "," publi "," in collaboration with "or" sponsored by ", for example. This is mandatory from January 1, 2021.

Since November 2020, Spain has a specific regulation for online betting advertising 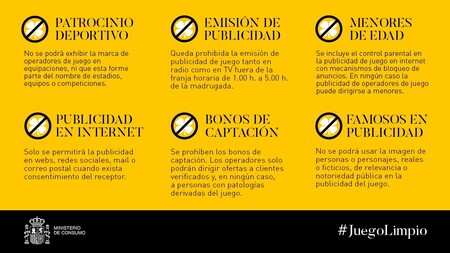 In addition to the laws relating to advertising on Instagram, it should be remembered that in November 2020 the Council of Ministers approved the Royal Decree on commercial communications of gambling activities that regulates, for the first time, advertising for the online betting and gambling sector in Spain.

According to official information, "in the last four years, investment figures have tripled in our country, accompanied by an increase in gambling consumption among young people From 18 to 25 years. In 2017, 28% of new players were in this age group. Two years later, in 2019, the figure reached 40%. "

Regarding advertising, sponsorship and promotion, the standard establishes a package of measures to restrict the exposure of minors and other vulnerable groups to the commercial communication of the betting sector, as well as to provide an adequate perception of the game as a potential risk activity.

On this matter, Sergio Carrasco Mayans recalls that "when dealing with bets, it is important to take into account the specific limitations of this nature of advertising." Posting bets is prohibited "unless the requirements of article 26 are met". If we look at this particular case, it is very difficult "that there really are instruments to prevent these communications from being directed to minors, making it an even more complex issue. "