OnePlus N100 vs OnePlus Nord, which of these two phones is better?

The OnePlus N100 or the OnePlus Nord? Find out which one is the best with this comparison.

Written by Paulina Cortez in Mobile

Consolidated as one of the most popular on the Android market, OnePlus has launched several models of mid-range mobiles and fairly affordable entry range in recent months, with quite favorable comments. If you want to buy a OnePlus mobile, but you do not know which model to choose, you should not worry since the firm has a fairly wide catalog and mobile phones with adaptable prices for all pockets. A competition between the mid-range and the entry range of OnePlus for the best position. OnePlus N100 vs OnePlus Nord.

In this case we will analyze the OnePlus N100 with the OnePlus Nord, one of the most popular phones of the firm since its launch, in this way you can choose the one that best suits your needs and tastes. There are a number of differences between them, including the price, so we compare each of the components, features and specifications of these two devices OnePlus.

Design and screens with great aesthetics

Naked eye their designs are quite similar, both have a front with a flat screen and a hole in the upper left corner to house the front camera, with the small difference of a dual front camera on the OnePlus Nord. Also, the size of its frames are very smallexcept for the lower one, which is a bit wider.

The similarities remain at the rear with a rectangular photo module in the top left-hand corner. The difference lies in the number of lenses, since the OnePlus Nord has four sensors Y the OnePlus N100 has 3 sensors. On the other hand, both terminals have on the back the logo and the name of its manufacturer with the same style and design.

The OnePlus N100 measures 164.9 x 75.1 x 8.5 millimeters and weighs just 188 grams thanks to its plastic cover and Gorilla Glass 3 glass screen on the front. You can find a hole in screen with a simple camera, and on its back, it has a triple photo module in linear arrangement. It is available in a single color called Midnight Frost.

The OnePlus Nord is more modern and measures 158.3 x 73.3 x 8.2 millimeters, weighing just 184 grams aided by the plastic material of its cover, which saves costs and gains lightness. Its screen is made of Gorilla Glass 5 on the front and has a hole in screen for double camera, at the rear, houses a quadruple photo module in linear arrangement. It is available in two colors that are Blue Marble and Gray Onyx. OnePlus Nord 5G in the two color options that are: the Blue Marble and the Gray Onyx.

Cameras: Hands down better than the OnePlus Nord

Regarding photography, we have to mention that there is a winner between the two phones of the OnePlus family. Its about OnePlus Nord, which has a more complete and advanced system than the OnePlus N100.

Specifically, the OnePlus Nord is considered one of the OnePlus phones with the best camera, it is equipped with four cameras on the rear: a 48 MP main sensor, an 8 MP wide angle, a 5 MP macro sensor and a 2 MP monochrome lens. In the hole on the screen is your 32 MP front camera. With this phone you can take more than correct photographs, with good level of detail and color reproduction.

The OnePlus N100's photographic system is more limited, it has a triple rear camera led by a 13 MP main sensor which comes with a 2 MP macro sensor and a 2 MP depth sensor for portraits. Also located in the hole on the screen, its front camera is 8 MP.

In short, the OnePlus Nord not only has more cameras, but these are of better quality than the N100. In addition, the Nord has 4K video recording, optical image stabilizer, dual led flash, backlight sensor and continuous autofocus for video recordingVery useful elements that the N100 does not have.

We all want fast charging battery and the best performance, do these phones have it?

The OnePlus N100 has a larger battery than the OnePlus Nord, 5,000 mAh vs 4,115 mAh respectively. Seeing the figures and depending on the use you give it, the most normal thing is that the autonomy of the N100 lasts a few hours longer than that of the Nord. However, the OnePlus N100 can be charged at a 18W maximum power.

For its part, the OnePlus Nord has a battery of 4,115 mAh with Warp Charge 30T technology, which allows you to recharge the device with up to 30W of power. As a result of this power you can recover up to 70% of the battery in just 30 minutes.

We must emphasize that OnePlus N100 with its powerful performance, is part of the select list of OnePlus phones with more battery. Processor and memory, do they have differences or similarities?

We start with the OnePlus N100, which comes equipped with a chip Qualcomm Snapdragon 460 that we find in other low-end mobiles, 4G RAM and 64 GB internal storage expandable by means of a second SIM card. It is a processor that perfectly fulfills its function with the most basic tasks, such as consulting social networks, watching series and movies on Netflix or chatting on WhatsApp. However, its performance looks affected when you demand more complex activities.

For its part, the OnePlus Nord, has a chip Qualcomm Snapdragon 765G higher speed, 12 GB RAM and internal storage with option of 128 and 256 GB, but in this case no microSD support for storage expansion. Thanks to its system and the operation of its processor, optimized with a 5G NSA modem, the OnePlus Nord is one of the stars of the mid-range.

The connectivity in the basics is similar, dual band WiFi in both, Low Power Bluetooth LE, GPS with support for multiple satellite networks, USB Type-C with OTG functionality and fast finger sensor (the OnePlus N100 has it on the back and on the OnePlus Nord you can find it on the screen).

What really stands out about the OnePlus Nord is that it has a modem compatible with 5G networksIn other words, you can take advantage of all the benefits of this connectivity to navigate faster. In addition, in this mobile you will also find NFC technology support to make mobile payments and more. 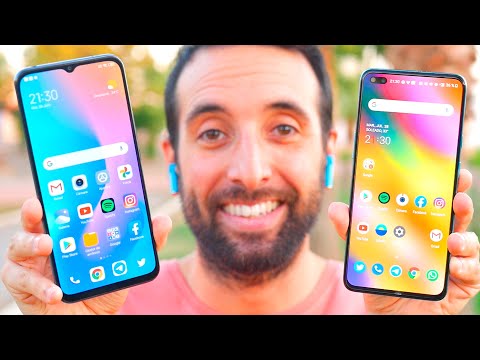 Other features and benefits

The OnePlus N100 has an audio jack outputHowever, it lacks NFC and face unlock functionality. The good thing about this mobile is that you would not have to worry about things to consider before buying a 5G mobile.

The OnePlus Nord has audio output via USB Cas it lacks the conventional headphone jack. Within its system it incorporates an advanced 3D facial recognition sensor for unlocking the mobile. In addition, with it you can connect to 5G networks and use all the functions of the NFC in addition to paying.

OnePlus N100 vs OnePlus Nord, which one should you buy?

You should definitely go for the OnePlus Nord, with a fairly fair price for all the benefits and qualities it has. OnePlus Nord with Snapdragon 765G and 6 cameras, also with a great photographic section, good power, a premium design, capacity options, a large battery and advanced features like 5G, to name a few. It is an excellent mobile of which we are sure that you will not regret buying.

However, if you want a low-priced mobile, the OnePlus N100 meets the most basic characteristics. This mobile adds microSD, offers a huge battery and it has the same update frequency as the Nord, but is affected in other areassuch as the camera, screen, and hardware.