Years later a youtuber leaks video to the HTC 'muskie', which would have been the Google Pixel 2 XL that never became ... And in those frames a whole Pixel 2 fits!

Four years have passed since Google presented us with its Pixel 2 and Pixel 2 XL, two smartphones to command the Android catalog that were to be made by HTC, although finally and in an unexpected turn, Google awarded the responsibility of the Pixel 2 XL to the South Korean LG at the last minute without revealing any of the reasons.

The development was already well advanced, in fact, since HTC itself used that platform to launch its HTC U11 +, and when it seemed that we would never know why this Google Pixel 2 XL codenamed 'muskie' had never come to be, a YouTube channel and xda-developers have shown us a prototype of that Pixel 2 XL 'made by HTC', which makes it very clear why Google scrapped its design. This would have been the Google Pixel 2 XL that never was, manufactured by HTC.

Yes friends, the rear is very similar to what we saw with LG's Pixel 2 XL, with its finish in two matt and glossy tones, single camera with LED flash it is the upper left corner and the fingerprint reader centered in the most comfortable position.

The difference was in the front, where The prototype shown by Calyx Hikari reveals huge frames, in which speaking in silver almost a Pixel 2 fits, and that would have been out of tune in a market I was already looking for the frontals full view as optimized as possible.

In those front frames a Pixel 2 almost fits, so in my opinion Google was right by discarding it and giving way to LG at a time when 'full view' designs were a trend and, as we saw later, they were here to stay.

Is this the only reason Google dumped the HTC Pixel 2 XL?

The truth is officially we do not know the motivations the decision to keep the Pixel 2 in charge of HTC and to change the manufacture of the Pixel 2 XL to LG, I am sure that we will never have official positions from Google to clarify the doubt.

In any case, it is clear that at least this HTC prototype 'muskie' shows oversized top and bottom bezels on his front, something that would have killed him before leaving for a dated look and absolutely out of the loop with what users required at that time, already ending 2017.

Obviously there are gaps for the two front stereo speakers up and down, but this in itself does not justify a panel so poorly optimized regarding the size of the device. 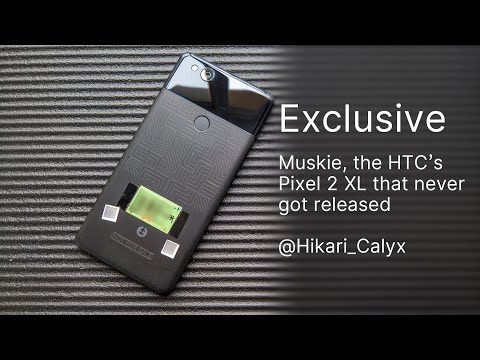 Whether or not this is the only reason, it does seem a compelling one to cancel the 'muskie' and give way to a Pixel 2 XL from LG that did meet expectations at the time, although it never became a best seller on the platform.

Also, the video posted lets us see a road tour by software installed in the prototype, which seems to still not have the digitizer or at least it was not functional, since the interaction is done via a mouse pointer like any other PC and not using the touch screen.

You can see Android 8.0 Oreo embryos with the security patches of May 2017, and justify Google's decision as I do then certainly that design on the Pixel 2 XL would not have been successful. and in fact it would only have raised criticism from both Google and HTC ... For me, Google's hit! And for you?