The Moto G9 Play and Moto G8 are two very similar smartphones from two families, however different, with subtle changes in design and cameras that will mark the choice ... Which one to buy between the two?

Now in the hands of Lenovo, the truth is that Motorola has acquired certain vices of the manufacturers of the giant Asian country, multiplying almost identical options in a catalog that has grown a lot, and that now offers us a good number of interesting smartphones, although all of them pointing to the most compensated range in the market.

In fact, it would be foolish not to recognize that these Moto G8 and Moto G9 Play, both released in 2020 with only a few months' difference, they target the same type of customer using quite different design conceptions, although without raising the 200 euros in both cases. Two very similar models from two different generations, but with subtle differences that mark the choice.

On your side, The Moto G9 Play shows more outdated trends despite being a more modern smartphone, with its notch in the form of a drop of water in the front and the rear camera module in the central part looking for symmetries.

His first cousin the Moto G8 is older and more modern at the same time, with an optimized front and hole in screen for camera, mounting a few photographic sensors arranged in single file on its rear.

It seems without a doubt that Motorola wanted to offer its customers on the one hand designs with notch and on the other with a hole in the screen, maintaining similar sizes and screens but changing and retouching details of the hardware, leaving the choice of the user which design you prefer knowing that the experience would be similar in all cases.

So, taking into account that choosing between the two models is not going to be easy, the truth is that we are going to try to give you a cable to show you similarities and differences and help you choose the best option between the Moto G8 and the Moto G9 Play ... Will you accompany us to see them?

On the basis that we won't find a clear winner, and that we have already revealed that the Moto G8 has a more modern design, with the optimized front and the hole in the screen, while the G9 Play opts for a notch, touch to highlight that both are also built with the same materials hinting that their objectives are the same.

In fact, the two have a tempered front glass, set on a polycarbonate chassis and with a back also plastic, achieving lightness with 188 grams for the Moto G8 and 200 grams for a Moto G9 Play that grows a little.

The two models have almost identical hardware being separated by only 6 months, with Qualcomm chipsets and IPS HD + screens, and with the important difference of autonomy playing in favor of the G9 Play with its 5,000 mAh.

The difference in weights is in your battery, with 4,000 mAh for the Moto G8 with 10W load and up to 5,000 mAh for the G9 Play, which also offers fast charging at 20W, both using USB Type-C connectors and without the option of wireless recharging.

The truth is that their processors differ, but there will be no palpable differences between the Qualcomm Snapdragon 665 in the Moto G8 and the Snapdragon 662 in the Moto G9 Play, in both cases accompanied by 4 GB of RAM and 64 GB of expandable internal storage.

The connectivity is also identical in the two models, with 4G LTE networks and active dual SIM, 2.4 GHz WiFi, Bluetooth 5.0 LE, aGPS with GLONASS, BDS and GALILEO support, FM radio, standard audio-jack and the aforementioned USB Type-C connector. Detail in favor of the Moto G9 Play, which does have NFC for mobile payments. 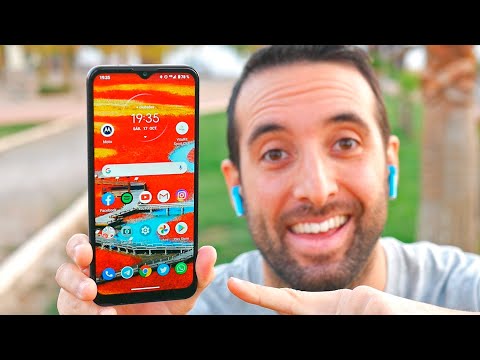 Mobile photography does differentiate them a little more, with a dot for the Moto G8

We always usually analyze mobile photography separately, not in vain it is a differentiating aspect that manufacturers use to highlight the most premiumso let's see what differences do we find between these two smartphones so similar.

The truth is that everyone wants a compact camera attached to a smartphone, but in this case we will have to settle for two triple modules looking for versatility, but with a dot above to the Moto G8 for its ultra-wide-angle sensor 8 megapixel that will give something more game.

The end results won't vary much, obviously, but having that ultrawide will open a larger fan in a mobile photograph that we now analyze in detail sensor by sensor ... Let's see the comparison table!

On the front, both smartphones have an 8 megapixel sensor very similar in quality, with aperture f / 2.0 for the Moto G8 and f / 2.2 for the G9 Play, adding HDR and capacity record video in FHD resolution up to 30 frames per second.

Speaking of video, the Moto G8 is capable of capturing at 4K resolution up to 30FPS, with the Moto G9 Play staying at FHD resolutions up to 30 or 60 frames per second, something the Moto G8 can do too, obviously.

Actually, it is that we cannot give you a verdict of two such similar smartphones, and it is that the experience with the two will be identical in practically all the sections, except for autonomy and photography that make up the only major differences with the design.

The materials are the same, hardware platforms are also the same, but the design varies making tastes enter, and there is nothing written about tastes ... Do you prefer 'notch' or better a hole on the screen? For me the second, of course!

If you value photography more and a more versatile camera, the ideal is that you buy the Moto G8, and In case the camera is not differential for you, the Moto G9 Play It has greater autonomy, charges faster and will also allow you to pay with your mobile thanks to the NFC chip.

Here are the conclusions because the prices are almost the same, as you may have seen, and there is no possibility that the decision between one or the other is twisted by only 20 euros of difference. Which one will you choose? I think I would stay with the Moto G9 Play, but I'm not too clear about it, really ...